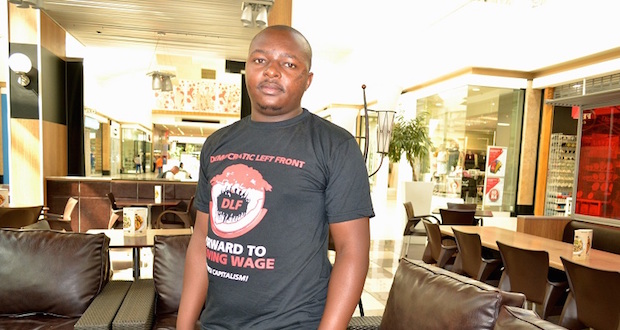 Residents of the Thembelihle informal settlement and members of the Thembelihle Crisis Committee (TCC) have come under intense police pressure, following accusations that they have been harbouring illegal immigrants. Muhammed Ismail Bulbulia spoke to NHLAKANIPHO LUKHELE, 26, the acting spokesperson of the TCC, about the police raids and xenophobic attacks.

The people of Thembelihle, to be honest, don’t harbour any discrimination or xenophobic sentiments towards foreigners. The truth is that some people – some criminals – will use this as an excuse and an opportunity to attack the businesses and shops of foreigners.

For example, about two months back, the TCC pioneered a protest, and during the first day of the protest some syndicates saw this as an opportunity to loot some shops owned by foreign nationals; a number of goods such as refrigerators were stolen. As the TCC, we held a meeting and decided to suspend the protest the following day and to embark on a search campaign. We went house to house, shack to shack, searching for the items stolen, and we were fortunately able to recover some of the items.

The police, however, are not helping us at all. In fact, in most cases the police are the ones that are instigating violence against foreign people. For example, look at the recent raid that happened in Thembelihle where the army was deployed to prevent xenophobic attacks. Instead of the police assisting in preventing attacks, the police spokesperson for Gauteng said that Thembelihle is a hotspot for crime.

While crime is obviously an issue, the crime rate in Thembelihle is very low. So the police made the issue about crime and not about preventing xenophobic attacks, which led to an association of foreigners with crime –      this only succeeded in reinforcing xenophobic attacks

The government is even less help as they are assisting in instigating violence against poor foreigners along with the police. The targets of the recent raids like Operation Fiela were not upmarket suburbs like Sandton or Houghton, but the most disadvantaged areas like Hillbrow and Thembelihle, where police searched for illegal immigrants to charge with crimes.

I joined the TCC about 12 years ago because of the situation that we are forced to live under. The TCC is the only structure in Thembelihle that speaks on behalf of the people and represents the views of the community as a whole. We were living with no electricity, no water, no housing; I felt the need to join the TCC so that I could bring change.

We help foreigners because these are our African brothers. Even though we have been divided by the historical system of colonisation, Africa is one continent.

AÂ healthy and positive relationship with foreign nationals exists in the community in Thembelihle and we assist foreigners in several ways – for example, some foreigners have kids, who we believe have a right to education and a right to health regardless of whether their parents are illegal immigrants or not. We assist in registering kids at schools and sorting out paperwork and administration like missing birth certificates and so on.

As the TCC, one of the methods we use to educate and conscientise people is to call public meetings where we open discussions to the public, so that they can voice their opinions. We also host general regular meetings weekly in the community centre where we have political discussions to engage on issues such as the reasons for xenophobia with our members and the community, so that we’ll be able to address them together.

We are all Africans, which is why we need to protect these people – they may not be from the same country, but they are still human beings, and they still have rights that deserve to be respected and protected.

– As told to Muhammad Ismail Bulbulia.