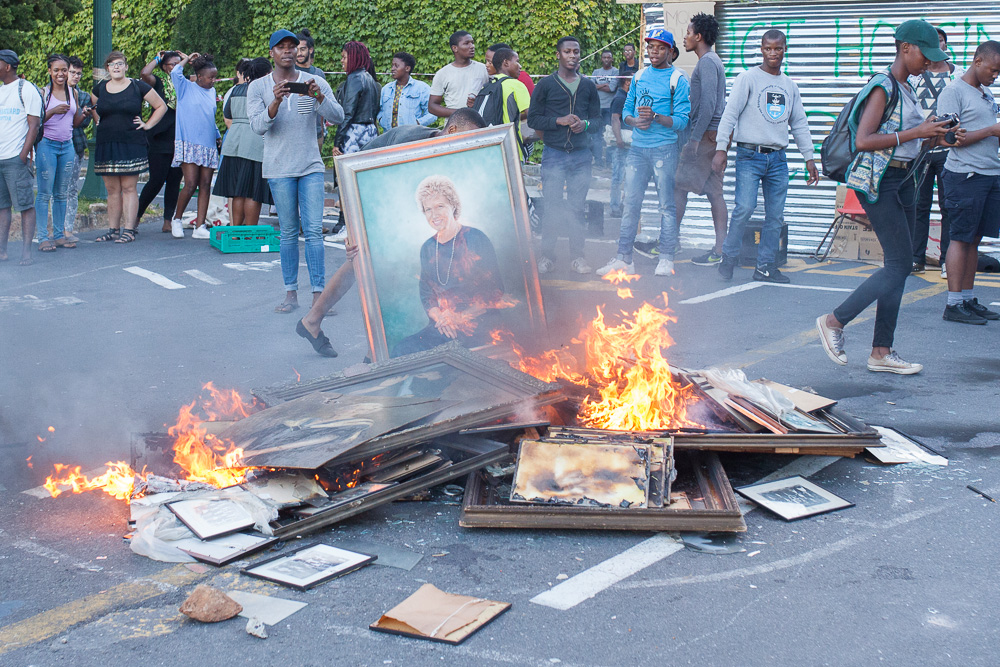 The 1994 vote was not decolonisation. There is still a need to physically decolonise the country and decentre whiteness as the only legitimate form of civilisation. Otherwise we will continue to scoff at brilliant young black minds who remind us of the need to decolonise not just our education but our country. This is why student movements like Rhodes Must Fall (RMF) and Fees Must Fall are increasingly important in South Africa.

Universities are strongholds of colonial means of knowledge production and capitalist imperialism, and are full of colonial symbolism. RMF centered its early protests around the presence of a statue of coloniser Cecil John Rhodes at the heart of the University of Cape Town, forcing South Africa to face the psychological violence of colonial symbolism. It translated an alienating academic concept like decolonisation to the public and used it as a tool of resistance.

The movement challenged the public to think deeply about the legacy of colonialism, apartheid and the fallacy of the rainbow nation. By insisting on centralising Black pain as a legitimate cause for resistance, it challenged notions of social cohesion and deconstructed coloniality and the violence of structural racism. In fact, what the students often refer to as decolonisation is actually decoloniality.

Maldanado Torres, a scholar of decolonial theory, describes decolonisation as the withdrawal of direct colonialism from the colonies. Decoloniality meanwhile refers to the undoing of colonial patterns of power that defined “culture, labour, intersubjectivity relations and knowledge production beyond strict limits of colonial administrations.”

For Sabelo Ndlovu-Gatsheni, coloniality is a “racially hierarchised, imperialistic, colonialistic, Christian-centric, heteronormative, patriarchal, violent and modern world order”. It is the historical subjugation that resulted from the slave trade, imperialism, colonialism, apartheid, neo-colonialism, neo-liberalism and globalisation.

The call for decolonisation, and for decoloniality, comes from the need to extricate the global South from historical subjugation under white capitalist imperialism.

Colonisation, and by extension coloniality, are imperialist models that centre whiteness while simultaneously dehumanising people of colour. Post-colonial theorist Frantz Fanon argued that colonialism not only dehumanises but also reaches back to the subject’s past to distort, disfigure and destroy it.

For example, the root of anthropology as an academic discipline was to study people of colour and create meaning of our social relations based on prejudices (i.e, that we were barbaric and uncivilised). In a sense, most histories about African people are highly unreliable. They were written to prove racist notions of black inferiority, aid imperialists or justify colonial brutality.

Not only did colonialism destroy our past, it disconnects us from the legacy of colonisation and blinds us to the ways that centring whiteness is violent to the black psyche.

“Perhaps we haven’t sufficiently demonstrated that colonialism is not satisfied merely with holding a people in its grip and emptying the native’s brain of all form and content. By a kind of perverted logic, it turns to the past of the oppressed people, and distorts, disfigures, and destroys it. This work of devaluing pre-colonial history takes on a dialectical significance today.” – Frantz Fanon, The Wretched of the Earth

Still, most South Africans are unaware of how the violence and trauma of colonisation, apartheid and coloniality still affect us. If we have no historical understanding of why we are in this rut as black people – that is, because of white supremacy – then we will not see the need to destroy white supremacy. Like neo-liberal capitalism, white supremacy and coloniality set themselves as the norm and the epitome of civilisation.

Just as capitalism locates itself as the only viable economic model (despite markets failing and crashing repeatedly), white supremacy forces us to rely on its racist logic to make sense of our humanity. So we believe we are poor because we are lazy rather than because we were and are still relegated to slave labour.

When we have no historical understanding of colonial brutality and systematic racism, we cannot mobilise against it. If our point of reference is whiteness as the height of civilisation then we will always fall short.

White supremacy is dependent on domination, racism and the erasure of black people. To destabilise whiteness as the norm, it is imperative that we deconstruct our reality as a result of colonisation and coloniality.

7 poems commemorating the Women of the anti-apartheid struggle