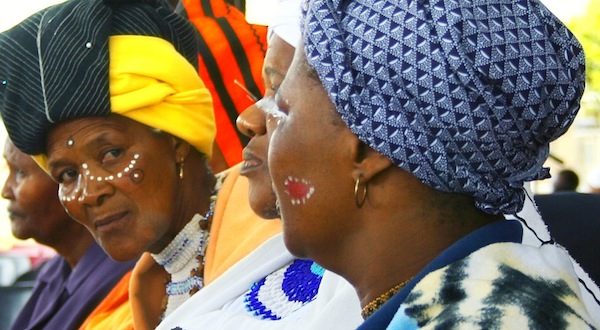 In the margins of my childhood in Pacaltsdorp there was always the doek – floral, kitsch, oriental, often political – printed cloths mapping endless trails of wisdom and life experience on the heads that wore them.

The doeks I remember most vividly are probably the ones worn by my grandmother, Aunt Lena, as she was known. My earliest memory of her headgear was when my six-year old self burnt a hole in one of them, after playing with matches in the backyard. My backside soon met a different piece of fabric, the vatdoek, wet strikes executed in rapid succession. I then learnt that this was what she wore to work.

She occasionally picked green beans on a farm on the banks of the Gwaiing River, along the Garden Route near George. In my grandmaâ€™s life sheâ€™d been a maid and worked a line at a factory, among other things. She was a proud and opinionated woman who raised her children to value education above all else.

Moments later, a lorry parked at the gate in front of our house, revving its engines to the sound of female chatter. Thirty or so women, all wearing doeks, were packed into the back. Some had babies and toddlers with them. I remember worn-out facial expressions and exhaled clouds of winter morning air circling their vibrantly covered heads. The women on the truck extended their arms to help my grandma climb into the lorry.

Years later, after I had graduated and started an internship at the Council for Scientific and Industrial Research, a friend invited me to the unveiling of her fatherâ€™s tombstone in Lefiso, Mpumalanga. Again, I was confronted with the doek.

The night before the unveiling, I joined my friendâ€™s sisters, aunts, cousins in preparation for the event. Iâ€™d never seen so much meat or peeled so many vegetables in my life. But in the idyllic mayhem of two cultures colliding, physical labour seemed trivial.

I knew very little about Pedi culture then. The sun was barely out, we woke up and got ready. A piece of lime green patterned cloth was folded in front of me. â€œCover your head with this and try not to make eye contact. Itâ€™s very disrespectful,â€ I was told.

After the prayer ceremony, administered by the Zion Christian Church and punctuated by the stamping of feet, the celebrations began. My awe of dance, laughter and music ended briskly when I was called to resume my duty serving guests. Still wearing my doek, I positioned a tray on my hip; I handed out drinks and food and cleared tables.

One table of men was very impressed with the way I was conducting myself. â€œIt makes me so happy to see when women know their place. You keep this up and youâ€™ll be a makoti [new bride] soon,â€ one of them said.

My doek soon came off.

Last week Thursday, to mark the beginning of the tokenism that is Womenâ€™s Month, the Department of Arts and Culture (DAC) launched the #WearADoek campaign on Twitter, encouraging people to wear a doek on Fridays in order to draw attention to women. (Because, you know, why would we want to be acknowledged for the rest of the year?)

#WearADoek in support of #womensmonth2014 tomorrow and share your #mydoekselfie every Friday for the month of August.

The mere suggestion by the DAC affirms to me that we (yes us with the vaginas) are still second-rate citizens on multiple levels. In all my doek experiences there is one commonality – the undeniable weight of a subliminal narrative riddled with both historic suffering and servitude.

To be fair to the DAC, the doek can be a symbol of womanhood. People across the continent wear doeks either as an expression of heritage or merely to make a fashion statement. And before we signal that cultural appropriation alarm bell, letâ€™s acknowledge that experiencing each otherâ€™s cultures by wearing garb or attending ceremonies can be enriching and might even give us a better understanding of one anotherâ€™s frame of reference, be it social, cultural, political or religious. So #sitdown.

The thing is, thereâ€™s a time and a place for a doek. (Ahem, Helen Zille and Fellow Fighters.)

It boils down to contextual appropriateness. When methods like this are used to promote solidarity or signify empowerment, we must question the intent of those initiating the movement. Is the doekie campaign just another example of power acting out an oppressive act, the perpetuation of a negative stereotype, the socialisation of a gendered division of labour? I would argue, yes. Whatever skewed construct subsists, wearing a doek does nothing to challenge or rectify it. Youâ€™re only amplifying the problem.

Women are not some monolithic entity; we are different, complex and fluid. And so are the battles and challenges we fight daily. So, how about we focus on something tangible? Instead of positioning our relevance by drawing on events of the past, I propose we present an alternative of the now.

There are better ways to promote year-round discussions on equality. How about focusing our energies and hashtags on reviewing legislation for a more comprehensive Sexual Offence Act and Domestic Violence Act? How about making hormone treatment and health services for transgender women more accessible? And while weâ€™re injecting girls with contraceptives, how about making them aware of their options when it comes to exercising safe sex, instead of using it as an ultimatum weighed against their right to education?

I often think of that morning in our backyard. Why did I, even then, have the urge to set the doek alight? Â I donâ€™t know. But as Chinua Achebe says in Things Fall Apart, â€œliving fire begets cold, impotent ashâ€. And so, a word of caution, the nature of our agency will always determine either the futility or productivity of our actions. Lorhren-Rose Magdalena Joseph is from Douglas, that place right in the middle of South Africa. She believes in people, science, justice and freedom. SheÂ was once practical. (She used to be a chemical engineer.) Now she tells stories as a journalist, traveler and foreign teacher. She isÂ determined to make it matter on paper or screen, one non-paying job at a time. Follow her on Twitter .