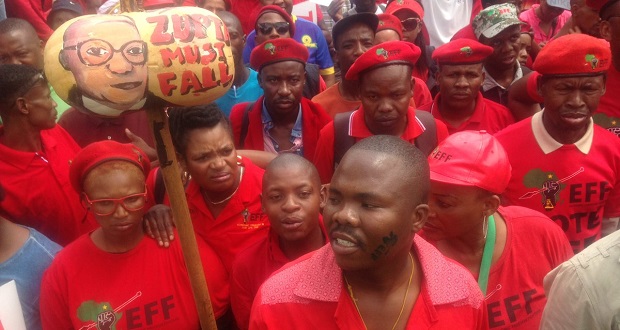 On Wednesday, the EFF and the DA marched to the courts, while the campaign Save South Africa held a peopleâ€™s assembly at a church in the Pretoria CBD. This is what went down throughout the day.

The EFF march kicked off on Wednesday morning, with protesters marching from Church Square towards the Pretoria Magistrates Court. They stated that their march was a call for President Jacob Zuma and Shaun Abrahams to be removed. They are also marched in support of Fees Must Fall, saying that studentsâ€™ demands for free education must be met.

During the march, protesters clashed with police, with rubber bullets and teargas being fired. Shops were also looted, fire extinguishers were set off and fires were started on the streets. Protesters later returned to Church Square where a petrol bomb was thrown at the statue of Paul Kruger.

After Julius Malema addressed the crowd at the Square they moved to the Union Buildings where they were met with stun grenades after throwing rocks over the gate.

EFF members tried to get into the Union Building lawns which had been closed off by police. Malema then entered into negotiations with the police captain, saying said that they would give the police 30 minutes to let them enter the lawns or protesters would move onto Pretoriaâ€™s streets.

Malema giving police 30mins to open the gate to the lawn of parliament or they will take to the street. #StateCapture #Effmarch pic.twitter.com/hFqdQ59QWj

Once the Public Protector released the State Capture report, however, Malema changed his mind and told the crowd that they should disperse in order to do their homework. He said that the party planned to read the report, and might file for President Zumaâ€™s impeachment in the morning. After Malema addressed them, the crowd started dispersing.

The DA also marched to the Pretoria Magistrates Court earlier that morning. The crowd marched from Princess park to the Magistrateâ€™s Court without incident. DA leader Mmusi Maimane addressed the crowd, speaking on Zuma, Shaun Abrahams and state capture.

Maimane says he's heading straight to court after the #DAMarch where the #StateCaptureReport is being heard. pic.twitter.com/miFrCWNdH8

They had originally planned to march to court in support of Pravin Gordhan. Even though the charges against Gordhan had been dropped they continued with the march because, â€œSouth Africaâ€™s democracy is under threatâ€.

While everyone else marched, the Save South Africa campaign (which is made up of organisations, civil society groups, prominent individuals and business leaders) held a â€œpeopleâ€™s assemblyâ€ at St Albans Cathedral. This was to celebrate the dropping of the charges against Pravin and to outline a plan of action on how to intensify their campaign against state capture. It was also to call for Jacob Zuma and Shaun Abrahams to resign.

Among those who spoke at the assembly were ANC stalwart Sipho Pityana, Deputy Minister of Arts and Culture Paul Mashatile and former Constitutional Court judge Zak Yacoob.