Home As Told to “We’re not asking them to nurse black people” – an EFF...
WhatsApp
Facebook
Twitter
Email
Print 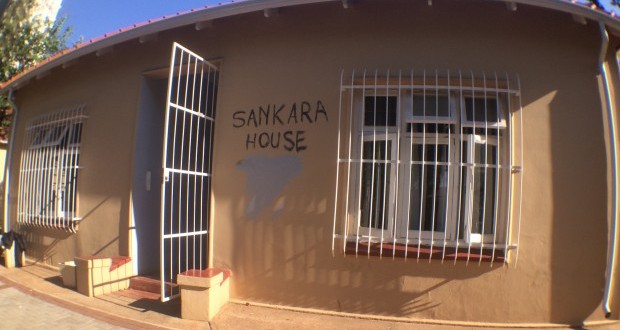 Three of the 27 students from the University of Pretoria who were arrested last week for their alleged participation in the clashes that ensued at the university had their charges dropped. AMLA MONAGENG, one of the three and member of the EFF Student Command spoke to Mbali Zwane about his account of events at the university. No transformation has happened at this university. They’re still calling it TUKS, the Transvaal University of Technology, a name used during apartheid. Who are Oom Gert and Merensky? What did they do for South Africa? If they can tell us how they contributed to South Africa then we’ll understand why their statues are honoured in this institution.

We had a scheduled meeting with the university management and leaders from other organisations to review the Afrikaans language policy. But AfriForum interrupted preparations for the meeting. They mobilised about 400 white students to fight us. That’s when things flared up and students were arrested. While there were students protesting outside the campus, I went to the police station to query how many students were arrested.

When we got there, police were aggressive and began manhandling us before arresting one of us for taking pictures inside the police station. I challenged the arrest because it had nothing to do with the police – he was taking pictures of us. Suddenly they [the police] turned around and said I was the guy they were looking for, so they tried to arrest me. I ran out of the police station and around the block. There were about eight cars chasing me; two metro cars, two private cars and police. After being on the run for some time, I decided to surrender and allow them to cuff me. They decided to moer me before taking me to the police station. I was bleeding heavily but they refused to assist me with any medical attention. Five hours later after my lawyer arrived, they decided to call an ambulance. I had to be taken to hospital because the paramedics couldn’t treat me on the spot.

When this thing unfolded, we were still planning how we were going to take this Afrikaans thing forward. These students harassed and assaulted us but management is protecting them. We’re tired of white privilege and AfriForum being treated better than us. They’re the same as any other organisation in this institution, why should they be treated differently? It’s the black students who were manhandled and shot at by police while the AfriForum guys are protected by the police, bouncers and campus security. In this institution, they prioritise white. Colour plays a role and we’re saying it must fall.

We’re not only fighting for Afrikaans policy to end as the medium of instruction but we’re also fighting for the eradication of all things Afrikaans in the institution and the fall of white supremacy and colonial symbols. We’ve been trying to engage with AfriForum about transforming the institution but it seems they’re the vanguard against progress towards transformation. They’re not willing to transform, they’re against it. We played our part in attempting to reconcile by inviting them to the table and engage but they’re failing to do so. They resort to fighting.

Management must play a decisive role and decide whether they’re managing the institution or protecting AfriForum so we can be clear if they’re not managing the entire student population. The stunts and violence perpetuated by AfriForum cannot be condemned by management. They need to show leadership. This is the correct time to transform and they should take initiative. The issues we’re raising are on the 2025 vision but that’s very far from now. We’re saying let’s implement now and those that are not practical, we’ll implement them when we get there.

We’re not asking them to nurse black people, they must do what is correct. What has this university done since 1994 to show transformation? Besides accepting a few black students?

As told to Mbali Zwane, edited for brevity and clarity.
Editors’ note: The version of events and opinions narrated here are those of Amla Monageng alone.