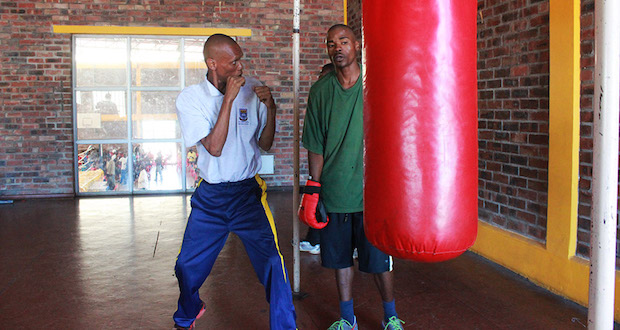 Two boxers from the menâ€™s Western Cape boxing squad have made it to the South African national team, despite the administrative foibles of the sporting body responsible for them.Â  Their dream is to continue to fight for a spot at the 2016 Olympic Games. RAâ€™EESA PATHER reports.

In a small room in Nyangaâ€™s Zolani Centre, Asemahle Sentile (19) and five of his teammates train for a national tournament in Pretoria. Sentileâ€™s breath comes out in short bursts as he jabs rhythmically at a punching bag, while his teammates practice their footwork in front of a mirror, throwing punches at their reflections, and curious children gather at the door to sneak a peek at the boxers.

The young men are among the Western Capeâ€™s most talented amateur boxers and last week competed in a round-robin tournament in Pretoria where the national squad was selected.Â Sentile did not qualify for the national team, but his teammates, Gregory Gans and Sinethemba Blom, made it, giving these young hopefuls a shot at qualifying for the 2016 Olympic Games in Rio de Janeiro, Brazil.

â€œIf you go to the Olympics, you are starting to be a role model to some of the people,â€ says Sentile. â€œI want to be an example, especially in my family, in my township, and in my country.â€ Sentile lives in Town 2 in Khayelitsha. He joined the Khayelitsha Boxing Academy at the age of seven to follow in his big brotherâ€™s footsteps. He soon emerged as one of the Western Capeâ€™s great young talents, bagging two South African junior championships. Sentile believes that without boxing, his life wouldâ€™ve taken a darker turn.

â€œWithout boxing, maybe now I wouldnâ€™t be here, I would be in a prison or on a corner smoking [drugs]. But boxing keeps me busy, it took me away from the streets,â€ he says.

Although his community is widely supportive of his success, Sentile says that he encounters jealousy, because â€œsome of the parents, some of their kids are in jailâ€.

The squad has come far, and done so on scant resources. Three of the boxers in the provincial squad belong to the Khayelitsha Boxing Academy, and have to walk 5km to reach their gym in Khayelitsha. They received no funding from the Western Cape Department of Cultural Affairs and Sport, and instead rely on the generosity of social media networks to cover transport.

Thanks to all the kind people of twitter and a few offline, @Klitsha_Boxing have reached their fundraising target. Now to go win some medals

Despite the challenges, Sentile remains focused and determined to reach his goals.

â€œI erase those memories. I just focus on my sport and forget about those resources that I donâ€™t have and focus on the things that I have now,â€ Sentile says.

Sentile has found inspiration from his coach Ayanda â€œJinjaâ€ Masapa, who coaches both the Khayelitsha Boxing Academy and the Western Cape boxing squad.

Masapa started the Khayelitsha Boxing Academy in 2001 in a shack in his grandmotherâ€™s backyard. His aim was to give poverty-stricken youngsters an outlet for their anger.

â€œBoxing is the only sport that the boys can do to get rid of their anger. Especially in these communities that we have. People are angry, people are poor, so people want anything that can channel their anger,â€ says Masapa.

â€œWhatever is happening in the ring, we can implement in life. When you get caught by a punch in the ring, you just sit down and relax and think â€˜How do I hit back?â€™â€

But Masapa says his athletes are â€œsufferingâ€ because of the lack of support from local government.

â€œWhen these boxers go to the nationals, other provinces have tracksuits. Now they feel sidelined, because they are wearing their jeans. It gets their spirits down,â€ he says.

One boxer, Gavin Ngubo, says he has to hike one-and-a-half hours from his home in Villiersdorp in the Boland to reach the sports and recreation centre where the boxers train. According to Masapa, the Western Cape Boxing committee has failed to properly administer their financials, which has prevented them from accessing funding from the Western Cape Department of Cultural Affairs and Sport.

Where does this leave Sentile, since he didnâ€™t make it to the national squad this time round? He still views boxing as having given him access to opportunities. â€œI want to make me and my parents proud, and I want to make my country proud, so that I can open a lot of doors,â€ he told The Daily Vox.

Although itâ€™s certainly not yet time to hang up his gloves, Sentile also has an eye on the future and plans to study sports physiotherapy at university in 2017.

Watch the Western Cape boxing squad training for the nationals: