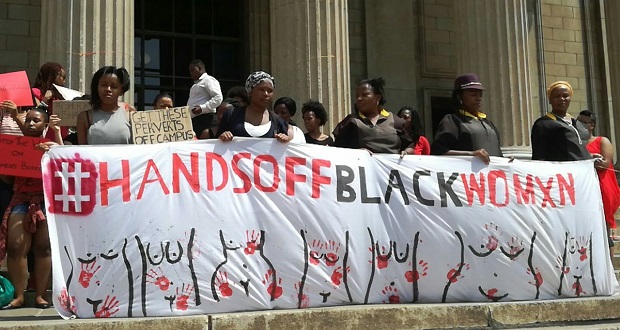 16 Days of Activism for No Violence Against Women and Children is an annual international campaign to raise awareness. It runs from 25 November to 10 December each year. But this year, the *womxn of South Africa didnâ€™t wait for these ten days to expose and condemn the violence they experience at the hands of men. The conversations around rape culture have been ongoing, and womxn have constantly been reminding those in power to heed the call of the oppressed and to stop allowing perpetrators of sexual violence to escape unscathed.The Daily Vox rounds up a few of the protests initiated by womxn before this yearâ€™s 16 Days of Activism kicked off.

At the end of 2015, a womxn at the University of Cape Town (UCT) who was part of the #RhodesMustFall movement wrote a Facebook post saying that a â€œfellow comradeâ€ had raped her at Azania House – the former Bremner building on campus.

Womxn were angry that those who raise incidents of sexual violence within socially conscious movements are denounced for causing division among their fellow comrades. Some members of the #RhodesMustFall movement stormed the accusedâ€™s campus residence but he was not found. They protested outside the police station, demanding justice for the womxn who said she was raped.

The Trans Collective of UCT also stormed the Centre of African Studies at the one year anniversary of #RhodesMustFall where Chumani Maxwele was celebrated as one of the founders of the movement, even though one of the members had come forward saying that he had sexually assaulted her.

They took their comrades to task for being silent on issues of rape and accused them of being #WokeOnlyOnRace. Womxn also slammed the university for its ineffective methods to deal with sexual violence on campus.

6. Even after #RapeAtAzania happened, cis men kept derailing, even victim blaming. We disrupted meetings bare-breasted to get it addressed.

The #RUReferenceList refers to the list of alleged perpetrators of rape and sexual assault at the University Currently Known As Rhodes (UCKAR) that was leaked onto Facebook in April.

UCKAR experienced mass demonstrations calling on the resignation of the SRC members who had been named in the list and questioning the sexual assault policy of the university. Demonstrators spoke out in support of survivors of sexual violence and demanded that action is taken to investigate those named.

Vice-Chancellor Dr Sizwe Mabizela was on the scene of the initial protest and urged students to protect the identity of one of the men on the list and leave his residence. This infuriated protesters more because they found it ironic that Mabizela would protect a man accused of sexual assault when management had been so neglectful in addressing rape culture at the university.

Students at UCKAR protested again in a #SilentProtest, where a number of womxn went bare-breasted in their revolt against rape culture at universities perpetuated by the inaction of management regarding the #RUReferenceList.

Young women of this country have inspired me over and over again this year âœŠðŸ¾ #womensday #RUReferenceList pic.twitter.com/ZaOQtO1Wjp

A number of universities also demonstrated in solidarity with #RUReferenceList protesters.

Chapter 2.12 is derived from Chapter 2.12 of the South African Constitution guaranteeing â€œthe right to bodily and psychological integrityâ€ for all.

In April, a series of posters made their way around UCKAR to raise awareness of university policies regarding rape and sexual assault on campus and the attitudes of management toward victims of rape and sexual assault. Chapter 2.12 became the the name of the campaign at UCKAR that aimed to hold management accountable for perpetuating rape culture and calling for the universityâ€™s discriminatory and victim-shaming policies to change.

Posters put up in protest against rape culture at University currently known as Rhodes#RUReferenceList #chapter212 pic.twitter.com/bXQXQTCVom

The #Iam1in3 is informed by the UN Women data which states that one in three women are victims of physical or sexual violence. It has become synonymous with the prevalence and normalisation of rape culture in our society.

The hashtag #Iam1in3 was first used in April when students at Wits protested in solidarity with #RUReferenceList protests taking place at UCKAR. Womxn used the hashtag spoke openly on social media about rape culture and how to handle assaults on campuses.

#Iam1in3 was also used in conjunction with other protests like the Wits #SilentProtest,and the #RememberKhwezi protests in conversations about rape culture.

While Jacob Zuma gave his speech after the 2016 local government elections results were released in August, four womxn stoodÂ in front of the stage holding up placards that read â€œI am 1 in 3â€, â€œ#â€, â€œ10 years laterâ€, â€œKhangaâ€ and â€œRemember Khwezi.â€ the protesters were manhandled and escorted out by security officials but their protest became the talking point of the election results.

The protesters highlighted that it had been 10 years since the president had been acquitted of a charge of rape filed in December 2005 by Fezeka Kuzwayo, who became known as Khwezi. Khwezi became a symbol of the countryâ€™s complicit perpetuation of rape culture in allowing a rapist to get away with his actions. The #RememberKhwezi campaign, which then spread rapidly through social media, highlighted the forced silencing and exile of Khwezi, the necessity of a national conversation on rape and sought justice for rape victims and survivors of South Africa.

One of the protesters, Naledi Nokukhanya Chirwa, told The Daily Vox in August: â€œThe conversation around rape should not stop until rape stops. We are bearers and witnesses of this cruelty, hypermasculinity and misogyny that is performed on our bodies, identities and personalities.â€

On or around Womenâ€™s Day, a number of South African universities host an annual #SilentProtest against the incidents of sexual violence on campus. This year at Wits, the protesters demanded that universities take a more progressive stance against addressing issues of gender-based violence.

The protesters demonstrated in solidarity with movements across South Africa like #RapeAtAzania and #RUReferenceList, demanding that just systems are instated that ensure clear instructions on where and how to access medical assistance, counselling and support.

In September, a student from UKZN Pietermaritzburg said that she was raped at her residence by a South African Police Services (SAPS) officer, during raids on her at the height of #FeesMustFall. The news spread on social media but UKZN spokesperson Lesiba Seshoka denied the allegations.

Students rejected Seshokaâ€™s statement and donned black to march to the Alexandra Road police station in Pietermaritzburg to hand over a memorandum demanding answers for the Saps officials. The students held placards that read â€œNo means noâ€ and â€œNo to police abuse against womxn.â€ They demanded that action to be taken against the officer.

At #UKZN PMB this morning female students are marching to the police station in solidarity with the raped student. pic.twitter.com/iNOkCqWjwN

#UKZN PMB protestor: “We will wait for the man who did it, who is among us right now, to be arrested” pic.twitter.com/5hWWiuwAz3

Universities jacked up their security and police presence following the #FeesMustFall protests this year. In November, protesters at Wits University took to the picket lines to demand the removal of the police and security on campus, who, they claimed, had sexually harassed and brutalised them. The students wore red and black to symbolise sexual harassment of black womxn on campus.

A group of students at Wits are protesting against police brutality on campus #HandsOffBlackWomxn pic.twitter.com/7MW3D5xSlC

A police nyala is covered in sanitary pads and tampons streaked with red in #HandsOffBlackWomxn demonstration. pic.twitter.com/KtwV2mNUJQ

In the most recent event at Wits University, a womxn was allegedly raped at the Junction residence. She filed a complaint against the perpetrator but the matter was not addressed for three weeks, forcing her to live on the same property as the perpetrator.

Students of the residence came out with sjamboks and tried to evict the perpetrator from his room. They said that the university had waited too long to act on the complaint.

The rapist slept in the same residence as the complainant for 3 weeks. You need an investigation to figure out that there were major lapses? https://t.co/8hTY2KtiMG

The incident also sparked outrage online and people tweeted their outrage at the delayed action taken in rape cases.

When a man holding a shield has a stone thrown at them, it gets covered by the news. Rape. Everyone is silent. #RapeAtJunction

Wits vice-chancellor Adam Habib asked activist Nomboniso Gasa to investigate the allegations. Habib told The Daily Vox that the university is committed to addressing the rape problem that permeates society, but that management could only address a problem if it is brought to the universityâ€™s attention.

The Gasa report noted that the university had failed the survivor at various points of her complaint, and recommended that the structures in place to deal with gender-based harm and rape be reviewed, with changes made where necessary.

These are just some of the campaigns that crossed our radar – this list is not exhaustive. This year, especially, womxn were unapologetic and relentless in their activism against rape culture and gender-based violence. It is says something about how broken our society is that womxn keep having to lay themselves bare, repeatedly, only to be subject to oppression all over again.

While we admire and support these efforts at speaking out, we must ask: who has been listening?

*The term â€œwomxnâ€ is used intentionally to be inclusive of all femme identifying bodies, not just cisgendered women. The author also uses the term â€œwomxnâ€ to acknowledge that most of these movements were intersectional and included non-binary gender identities.