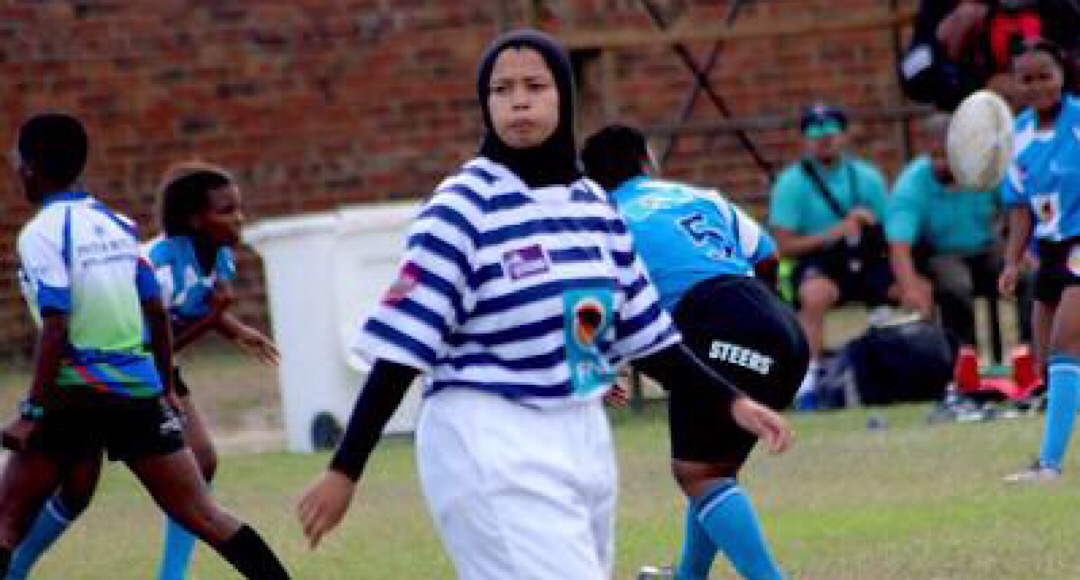 When Zahraa Hendricks ran onto the field to play her first rugby match with the University of Cape Town (UCT), she had no idea what would happen after the game. Cheryl Roberts, a supporter of womenâ€™s sports took a picture of Hendricks and posted it on social media. There was a massive social media reaction about the picture The Daily Vox team spoke to Hendricks about this and more.

On a sports field in Cape Town today, a hijab wearing woman rugby player enjoys participating in rugby. And there are no objections to her religious attire on the sports field. In a country like France, a hijab wearing sportswoman was objected to. Not in SA ðŸ“· @cherylroberts00 pic.twitter.com/cSST0TAl8l

The viral picture of Hendricksâ€™ was very interesting mostly because the caption celebrated the religious freedom most people enjoy in South Africa. Roberts made the point that Hendricks wore it freely while in other countries there are massive objections. For Hendricks though it was just a normal day.

She is a 21-year-old UCT student studying a Bachelor of Arts degree in English and Media Studies. Growing up in a sports-enthusiastic family, it was never a big deal that she played sports and with a headscarf at that.

â€œI just started playing [rugby] as well so I have been playing for a few months. I have played touch rugby before but this is my first time playing full contact,â€ she says, adding that she grew up playing rugby because her whole family played it.

â€œAll the males were all playing like my grandfather and my brothers and my nephews and nearly everyone was engaged in the sport and they would always be speaking about. So Iâ€™ve really always had a longing to also being on the field as much as they loved to,â€ she said.

Hendricks says her family supports her in everything she does. For her though rugby at the moment is just something she is trying out to see if she enjoys her and wants to do further with the sport. â€œIf I do grow and there are opportunities that come my way I will most definitely take it,â€ she said.

Hendricks wasnâ€™t even aware of the photo at first and was in fact quite amazed when it was sent to. â€œI was shocked because I wasnâ€™t aware that someone was taking note that I was wearing hijab while I was playing. But I [said] itâ€™s a good thing.â€ she said.

Wearing a headscarf while playing is something that isnâ€™t a recent thing for Hendricks. She has been wearing one while playing sport since school.

â€œWhen I started off at practise and when I initially signed up I was wearing my head scarf so it was basically like a part of the package. On the day of the first match someone did ask me if I was going to play with my head scarf and I was like yes, what do you mean. They had never even seen me without my head scarf. Itâ€™s just a part of me,â€ she said.

While for Hendricks wearing the headscarf is just about being true to herself she does hope it serves as an encouragement for other girls.

â€œIt could open doors for other girls that were like me who always yearned and longed to play a sport or any sport for that matter. There is an opportunity and they might feel confident and inspired to go and ahead do that,â€ she said.

She wishes that young girls donâ€™t allow people to get in their way and would do what they want without society hindering the wishes and dreams they have.

Hendricks says while she is just starting out with rugby and doesnâ€™t know how far sheâ€™ll go with it, she loves that it is a team sport where everybody works together.

Even the physicality of the sport appeals to her she says: â€œI feel it is physically challenging and you really have to work hard. When you put your body on the line itâ€™s an amazing feeling. As a woman in sport you always have physical challenges and thatâ€™s the real challenge but otherwise you are very much like anyone else playing the sport.â€

For the most Hendricks has appreciated the publicity and wants to use it to motivate her. The photo did present an unexpected side for her which is the pressure of being seen as some kind of role model for Muslim women.
However, she feels that as long as she keeps focused on doing this for herself, thatâ€™s the most important thing. â€œIn life people are always going to want to criticise you and prevent you from moving forward, especially if you get a little limelight. People will look for something to criticise you or make you look bad,â€ she says.

First-year UCT student Zahraa Hendricks, had no idea that running onto the field for the universityâ€™s womenâ€™s rugby team wearing her hijab would spark a discussion about inclusive spaces.

Whether she continues or not with playing sport, Hendricks finds a lot of inspiration from women in sport. Her particular favourites are athletes Ibtihaj Muhammad and Manal Rostom. â€œThey arenâ€™t in rugby but I really find them so inspiring because they are Muslim women in sports. I love how they portray themselves in the media and how hard they are working,â€ she said.

Niall Williams a New Zealand rugby player is a of Hendricks. Hendricks says: â€œI follow her as well and she is really amazing and she has two children. She is so strong and her work ethic and I love how she does her things. Williams is really amazing.â€

For many Muslim women in South Africa and around the world being visibly Muslim does not even mean being extraordinary. Itâ€™s just about living their lives like anybody else. Thatâ€™s true for Zahraa Hendricks and many others.