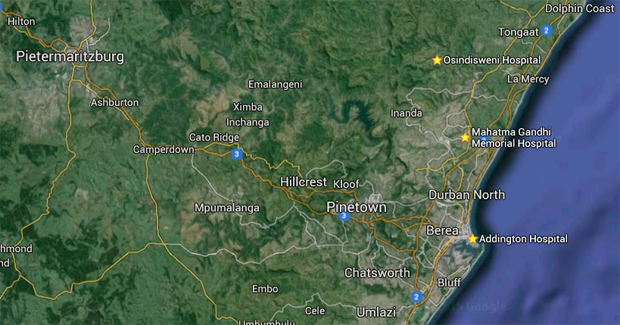 Last week a young man died after he was allegedly denied emergency treatment at two hospitals outside Durban. Following a public outrage over the tragic incident, two doctors and a nurse were identified and suspended by the health department. But sources at the hospitals say the official line doesnâ€™t tell the whole story â€“ and that the medics are taking the blame for a tragedy that was not of their making. A very pissed off DR THOMAS GRAY explains.

Nineteen-year-old Reveshen PandatherÂ was involved in a PVA (medical lingo for pedestrian vs vehicle accident) in Verulam, just north of Durban last week.

After being knocked down and seriously injured, it is understood that the young man was reportedly stabilised at the scene by paramedics who attempted to transfer him to the nearby Osindisweni Hospital.

Speaking on the telephoneÂ with Osindisweni, the paramedics were told the hospital did not possess the necessary facilities to treat the heavily injured patient and were instructed to take the patient to Mahatma Gandhi Hospital instead â€“ or so we are told.

On arrival at Gandhi hospital, the paramedics were told to take the patient to the Addington Hospital in Durban, where the patient could receive the required level of care.

The patient subsequently went into cardiac arrest while still at Mahatma Gandhi Hospital and passed away.

Loss of life, especially that of a young person, is always tragic for healthcare practitioners. And the dubious circumstances surrounding this young man’s death only makes the incident harder to accept.

But the manner in which the incident is being reported: that it was a case of â€œdoctors and nurses refusing to treat himâ€ is not only false, but highly, highly problematic. We all hate poor service and where there is a loss of life concerned, we despise it. But when a few medical staff are blamed so decisively for an incident that any medical professional working in this country would agree has a thousand variables, I have to call out the bullshit.

No doubt, something went wrong last Saturday. A young man died because he didnâ€™t get treatment. But the story is far more complex than that.

Please do not understand this as an attempt to soft-pedal the tragedy. Instead, itâ€™s an appeal to get to the heart of the issue,Â so the right people are held accountable and so such mistakes do not happen again.

Not all hospitals are equalÂ

Letâ€™s start at the beginning, with the hospitals.

They function as entry-level hospital care centres for most non-life threatening conditions, includingÂ minor trauma, and general medical care for children and adults. Neither hospital has on-site surgical capabilities.

This implies that they are not designed to care for a moderately or seriously injured patient who may require anything ranging from emergency surgery, ICU, or ventilatory support. The only hospital they are able to refer patients to is indeed Addington Hospital, a secondary or tertiary level facility with the capabilities to assist in such emergencies.

This does not mean that emergency medical services or paramedics do not take seriously injured people thereÂ (knowingly or unknowingly, I donâ€™t know) because as can be seen by last weekâ€™s case, it happens. For those patients who do arrive and need immediately stabilisation, the decision to treat them or refer them to Addington Hospital, King Edward (or if they are lucky: Albert Luthuli Hospital) is obviously based on their condition and several other factors.

The variables
Now that we understand that the hospitals, by their nature, do different things, letâ€™s look at the variables that determine how or if a patient will receive treatment during an emergency situation:

1. The level of experience of staff on the hospital floor
Often major trauma occurs in the early hours of the morning, sometimes they occurs in large numbers. Itâ€™s not unusual for an intern (read: a-wet-behind-the-ears doctor) to end up saddled with a patient with an issue that is way beyond their experience

2. The resources available
This is a major issue and its no surprise that both Mahatma Gandhi and Osindisweni are short of life-saving drugs and even monitoring equipment.

3. The level of experience and training of ambulance staff
To transfer a critically ill patient one requires an ALS (advanced life support) crew in addition to an ambulance. The scarcity of these personnel delays early transfer and definitive management of these patients.

4. The willingness of a surgical team to accept a patient
Surgical teams are already overburdened. Nobody likes to accept patients under such conditions. So these are the conditions, the variables. Once you understand them (not accept, because they are unacceptable), it helps one make sense of the circus that is public sector health.

The tragedy
So what happened that night?

I admit that Iâ€™m no investigative journalist, but it didnâ€™t take me long to find out that the media were latching onto a completely bogus and unfair version of events.

Letâ€™s look at the facts according to my sources at the hospitals in question.

The accident occurred in Verulam, which drains to Osindisweni. Mahatma Gandhi hospital did not need to be involved.

They were instructed by the doctor on call at Osindisweni to take the patient directly to Addington but defaulted on this instruction. Mahatma Gandhi was not informed of the patientâ€™s impending arrival either (which is routine practice in the management of heavily injured trauma patients).

A private ambulance service (you can easily find the name of the company if you wish) arrived on scene and transferred the patient. This particular company does not have any staff trained beyond the six-week Basic Life Support (BLS) crash course, which means they are not trained to handle severely injured patients, such as the one in question. By implication, they should have called a suitably qualified crew (ALS or Advance Life Support) to take over. They didnâ€™t.

Hereâ€™s something you didnâ€™t know. Had they called in a more qualified crew, they would have lost their R2,500 commission.

And it gets worse.

I have been told that the patient had such a severely depressed level of consciousness (indicating severe head injury), that he needed artificial airway and breathing measures.

This translates to a tube down the throat and a machine to help the patient breathe, which needs to be done by an ALS crew.

Failing to take this action compromises oxygen supply to the body, especially the brain, resulting in severe brain damage and eventually death.

By the time the patient arrived at Mahatma Gandhi Hospital, he was completely unresponsive and not breathing.

A tube was placed to secure his airway as described above and attempts made at resuscitation immediately upon his arrival. The reports indicate that he was attended to by three well-trained doctors and a senior nurse.

A fourth doctor had already telephonically arranged with the surgical doctor on call at Addington Hospital to receive the patient.

It turns out that this doctor, a celebrated army captain, was one of three medical staff suspended this week. In the face of public outrage, provincial government decided to cut staff in a hospital already overburdened and short-staffed.

The doctor in question was also made to suffer the double humiliation of being â€œescortedâ€ off hospital premises in full view of his patients and colleagues. A district physician, asked to conduct an investigation on the incident, is likely to release his findings any day now, but early signs suggest that government is looking for an way way out.

Will they consider the shortages of resources and staff? Will they explore how such a mediocre private ambulance service got the tender? What will the investigation find out that we already didnâ€™t know? To the general public, these are all â€œhospitalsâ€ that are meant to save lives. And they should. If they [the hospitals] could.

But as we have just learnt, not all hospitals are created equal. Irresponsible journalism and the disturbing trend of using doctors as scapegoats for a dysfunctional and backward health system makes me â€“ and all doctors â€“ sick.

Dr Thomas Gray (*not his real name) is a doctor living (and slowly dying) inside a public hospital. Heâ€™s here to tell us whatâ€™s happening inside our hospitals. He would share his name with you, but then heâ€™d have to kill you, and that would be unethical. If you have information to share, about this story, or any other aspect of our public healthcare system, do get in touch.

The Daily Vox is completely independent and we rely on your generosity. Support homegrown talent. Support original journalism. Help us tell your story.