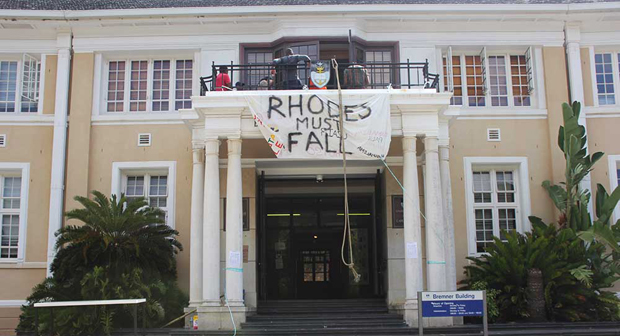 TO MOLEFE argues that whenever we speak about rape in hedged, legalistic prose, we simply reinforce rape culture.

That is not a verbatim quote. It is University of Cape Town’s November 16 statement on the #RapeAtAzania taken to its comical extreme â€” not that the statement had to be carried far to get there.

I mean, the same statement contains this line:

“Allegations of this nature are extremely upsetting.”

The sentence leaves even generous readers with some doubt. What, exactly, is extremely upsetting? That the â€˜allegationsâ€™ were aired? Or the â€˜allegedâ€™ violation itself; the rape, in other words? Or both?

“We acknowledge the devastating trauma for those closely involved.”

What is it exactly to be ‘closely involved’? We need the answer to that to determine the â€˜thoseâ€™ whose trauma is being acknowledged here. This task, determining whose pain is being acknowledged, is made even harder by the previous line which left unsaid what exactly was upsetting – the levelling of the â€˜allegationâ€™ or that which is â€˜allegedâ€™. The rape.

Read in context, the sentence could mean ‘closely involved’ in, broadly speaking, â€˜the allegationâ€™, â€˜the incidentâ€™, â€˜the caseâ€™ â€“ meaning the â€˜thoseâ€™ whose trauma UCT acknowledges is indeterminate. Depending on what you understand of the word â€˜closelyâ€™, it could include anybody, from the â€˜allegedâ€™ victim and â€˜allegedâ€™ perpetrator, to the universityâ€™s student body, to the UCT-appointed investigator, to the cops, to everybody made aware of the â€˜allegationâ€™, including you reading this from what I hope is a place where your safety and bodily integrity have never been, are not and will never be in doubt.

Should this be the case, the two lines could be condensed to read as covering all bases:

â€œWe acknowledge the devastating trauma incidents and allegations of rape such as this cause humanity.â€

The ambiguities beg the question. What was the purpose of the statement if so much is left unsaid?

The tl;dr answer is that the statement was an elaborate, cover-your-ass exercise on UCTâ€™s part, meant to tide everyone over until the courts decide, on behalf of university management, where the institution stands on the matter. On the rape. This, in my view, has compromised UCTâ€™s integrity.

The fuller explanation is this:

The word ‘allege’ and its derivatives appear seven times in a statement of 283 words. That’s 2.5% of the statement explicitly dedicated to calling attention to the fact that the courts have yet to pronounce on whether what is â€˜allegedâ€™ â€“ rape â€“ really did or did not happen, forgetting that courts pronounce only on what can be proven based on the law of evidence rather than what is true. Also forgotten is that the law questionably makes this exception of a mandated, pre-court-appearance silence in only two instances: sexual offences and extortion.

In the meantime, until the matter is brought before a court of law, â€˜those affectedâ€™ are effectively injuncted from speaking about it, about the rape, at least not without resorting to the guarded, woolly language deployed in UCTâ€™s statement. This is what the Criminal Procedure Act, and the Criminal Law (Sexual Offences and Related Matters) Amendment Act demand of us – an opaque, wordy silence on rape.

This is allegedly so because of all possible offences, these two â€“ sexual offences and extortion â€“ sully the reputation of â€˜those involvedâ€™ more than any other. How objectively true this is, or whether the cause of this effect, if real, might have more to do with the views we hold of sex and money rather than something intrinsic to violations related to them, is considered irrelevant. The law says â€˜those involvedâ€™ must be protected. The â€˜allegationsâ€™ should not be spoken about publicly let alone with any moral clarity, nor should names be named, until the matter, the rape, is brought for adjudication before the courts, which allegedly exist to establish with finality the truth of what happened.

That we know truth-seeking not to be what courts do is neither here nor there as far as the law is concerned. We are simply compelled to obey.

How 2.5% stacks up against the frequency of false allegations of rape I cannot say exactly as the definition of ‘false’ is contested. For example, does an acquittal in a court of law mean the allegation was false? Menâ€™s rights organisations certainly think so, as do large swathes of the population, as the trial of Jacob Zuma brought into sharp relief. I, and anyone who understands the judicial process, certainly do not think it does.

But I do know that whatever the frequency, false allegations of rape are rare, even in the too-frequent instances where the victim never lays charges.

However, itâ€™s not so much the frequency of the word â€˜allegeâ€™ and its derivatives in UCTâ€™s statement that trouble me. It isnâ€™t even that the statement claims incorrectly that courts pronounce on the guilt or innocence of the accused; courts rule on the guilt, or lack of, of the accused â€“ not their innocence.

What bothers me most is the effect of where the words appear. â€˜Allegedâ€™, â€˜allegedlyâ€™ and â€˜allegationâ€™ modify or displace nouns and verbs that might otherwise give us, readers of the statement, a clearer picture of UCTâ€™s sense of the right and wrong in what happened; in the rape. Because of this the statement also gives little on the universityâ€™s position on the realities of rape and how that affects how it handles this rape beyond the narrow requirements of the law.

It is, in short, a holding statement, one meant to portray UCT as neutral on the matter; on the rape.

With good reason, you might say. What if the â€˜allegationâ€™ is false?

As I said, based on the research there is, this is an improbable what if. Nonetheless at issue isnâ€™t solely the veracity of the â€˜allegationâ€™ but that there exists in this country social and judicial norms that normalise and excuse rape and other forms of sexual violence against women â€“ one of them being the disproportionate and debatable consideration the law gives to the possibility and effects of false accusations of, specifically, having committed a sexual offence.

This disproportionate and debatable legal consideration is based on a form of misogynistic gynophobia, a hateful fear of women hardcoded in the Christianity-influenced English and Roman-Dutch law origins of South African law. This fear holds that weâ€™d be stepping onto a slippery slope if women were allowed to level an accusation of a sexual offence without the accused, almost always a man, being allowed their day in court. At the bottom of the slope, in this fear-driven landscape, we find hordes of morose and disconsolate men financially and socially ruined by deceitful, spiteful women â€“ a rape-culture trope and the eternal Eves through whom Satan tempted Adam and manâ€™s God-given paradise was lost.

Given the known rarity of false allegations of rape and other forms of sexual violence, and the existence of a culture entrenched in social norms and law that normalises them, and the desperate need for us to dismantle it, the response of anyone, including institutions like UCT and those accused, to â€˜allegationsâ€™ of rape should be to speak as plainly as possible about the rape and rape in general, taking an approach that centres the needs of the victim. This isnâ€™t to say, discard the judicial system; only that the judicial process, which anyway has mechanisms to which those falsely accused can seek recourse for whatever harm is caused, is separate from the ethical.

Should we not do this, should we instead abandon our sense of right and wrong to the law as UCT has done, the realities of rape in this country mean that every instance spoken about in hedged, legalistic prose is another building block of rape culture added atop the towering wall that keeps us trapped in this nightmare.

TO Molefe is the author of For Blacks Only and Other Ways of Being, a soon-to-be-published collection of personal essays guided by black consciousness, intersectional feminism and ubuntu.
– Featured image by Ra’eesa Pather