Home Features Updated: what you need to know about the crisis in Burundi
WhatsApp
Facebook
Twitter
Email
Print 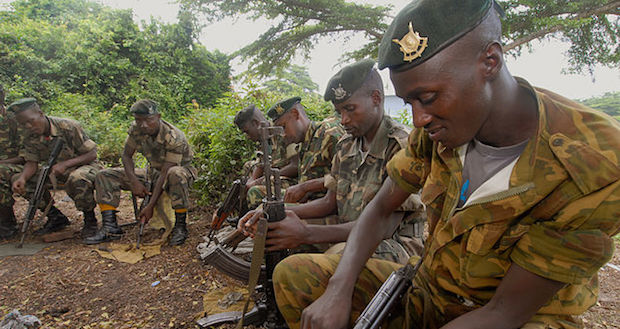 Burundi is in the midst of a political crisis and violence is spilling out onto the streets of its capital, Bujumbura. There are fears that a civil war could break out and lead to regional unrest. MUHAMMED ISMAIL BULBULIA outlines five things you need to know about Burundi right now.

*UPDATE: This article was updated following the controversial parliamentary elections in June.

1. The current crisis is only the last link in a chain of catastrophes
Living in the shadow of a 12-year civil war spurred onÂ by ethnic conflicts between majority Hutus and minority Tutsis, most Burundians are tired of violence and unrest and are loathe to see another violent chapter in their countryâ€™s fratricidal history.Â The civil war ended in 2005 with the drawing up of a constitution and the election of former rebel leader Pierre Nkurunziza. Although the president has overseen a period of impressive stability during his two terms, his ruling party, the National Council for the Defense of Democracy-Forces for the Defense of Democracy (CNDD-FDD), has worked to tighten its grip on power through violence. A group consisting partly of former civil war combatants, known as the Imbonerakure, has been linked to the killing of Nkurunzizaâ€™s opponents with its role expanding as his campaign for a third term began to mobilise.

2. The crisis was ignited by the presidentâ€™s unconstitutional decision to run for a third term
TheÂ announcement that NkurunzizaÂ would seek a third term in this yearâ€™s June elections has been deemed a violation of the two-term limit set out in Burundiâ€™s constitution, as well as the 2000 Arusha peace agreement, which was credited as containing Burundiâ€™s ethnic rifts and serving as a basis for the constitution.Â Activists have taken to the streets to protest the decision and opposition leader Agathon Rwasa called on Nkurunziza to abandon a third term to â€œprevent the country from massive violence and killingsâ€. The presidentâ€™s supporters meanwhile maintain that his first term does not count as he was picked by lawmakers and not democratically elected.

3. Violent protest has been met with violent police reactions
Hundreds of frustrated protestors have taken to the streets in recent days, chanting slogans and waving placards and, according to some reports, hurling stones at police and burning tyres to block roads, to voice their dissent. Police have responded by using tear gas and water cannons against the protestors. According to the Red Cross, hundreds of people have been arrested and at least 77 peopleÂ having been killed so far.

4. The government doesnâ€™t want foreign intervention
Western nations and regional African countries have pushed Nkurunziza not to seek a third term, but Nkurunzizaâ€™s government has requested that diplomats and foreign organisations â€œobserve diplomatic neutralityâ€. The US and EU have warned that they would take steps against any individuals who stoke violence in the country. UNÂ secretary-general Ban Ki-moon did sendÂ a UN special envoy for the Great Lakes region to Burundi for talks with Nkurunziza and the opposition, but the president is having none of it.

5. There are fears the conflict could reignite a civil war and spill over into surrounding countries
Living in the shadow of a civil war that ceased only 10 years ago, more than 127,000 Burundian civilians have already fled the country, with 62,000 seeking refuge in neighbouring Tanzania and at least 45,000 escaping to the Rwanda. In May, a cholera outbreak killed 31 refugees in Tanzania. Burundi and Rwanda have historically been destabilised by cross-border unrest due to their proximity, shared colonial history and similar social and ethnic structures. Should the current situation in Burundi devolve into a full-scale war, anti-Rwanda elements in the region could side with pro-Nkurunziza forces. Eventually, other regional forces could be dragged into a conflict.

*6. Chaos ensues during parliamentary elections
On 29 June, Burundiâ€™s parliamentary election was fraught with controversy. Opposition parties have claimed that the government has restricted media freedom, made unjustifiable arrests, and perpetrated intentional violence on Burundiâ€™s masses. In just one violent incident, the elections were interrupted when a grenade was hurled at a polling station. Violence also continues in the countryâ€™s interior, with gunfire being heard nightly in Bujumbura. Presidential elections took place on July 21, though most opposition parties boycotted the poll.

– FIRDAUS KHAN contributed to this article
– Featured image of Burundi peacekeepers by US Army Africa via Wikimedia Commons.