Home Features Whatâ€™s fashion got to do with the state of the nation anyway?
WhatsApp
Facebook
Twitter
Email
Print 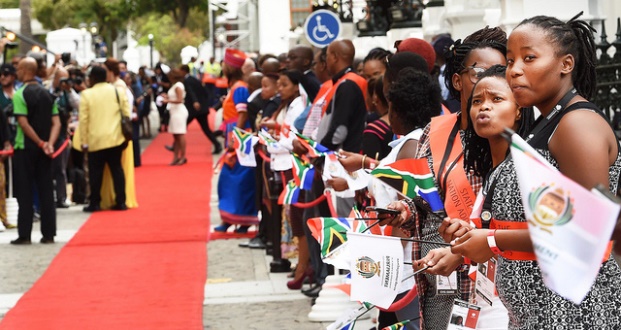 There is a certain element of celebrity in the State of the Nation Address (Sona) that has almost taken over the real importance of the presidentâ€™s speech. PRESANTIE REDDY wonders whether the fashion choices our politicians make have any relation to their actual politics.Â

The red carpet at Sona has become synonymous with fashion statements that scream louder than the work of our politicians, or the president for that matter.

â€œ[It] is indicative of the way parliamentary procedure in South Africa has become vacuous, a theatrical performance with little substance or relevance to the experience of ordinary citizens.â€

Elle magazine editor Emilie Gambade disagrees. She says the fashion at Sona has become an important part of politics in South Africa.

â€œOf course, there will always be a side of it which looks like what I call ‘a matric dance for grown-up people.’ But fashion on the Sona red carpet can mirror something far more interesting than just evening gowns and suits.â€

And still others disagree.

Mmusi Maimane’s spokesperson, Mabine Seabe, says the focus on the red carpet is a distraction.

â€œThe Democratic Alliance believes that Sona should not be a red carpet extravaganza, given the plethora of issues facing South Africa and its people â€“ joblessness, high levels of crimes, a limping economy, to name a few.â€

For Seabe, and the DA, the presidentâ€™s words should be the focus of the evening.

â€œAll focus should be on the speech,â€ he said.

Its should be called a state of nonsense, #SONA is not a fashion parade – #EFF

There is no doubt, however, that fashion choices are in themselves a statement, of the tenuous balance of our politics, and perhaps too, it is in some ways a statement on the state of the nation itself.

â€œI still remember the image of Julius Malema at SONA 2015, his white t-shirt ripped off and showing part of his skin as he had been thrown out of Parliament,â€ Gambade says.

“[It stood] In sharp contrast with the impeccable and monochromatic black suit, black shirt, black tie of Mmusi Maimane, while both of them stood outside of Parliament, the voice of President Jacob Zuma and his speech to a half-empty assembly echoing around us.â€

Does the red carpet fashion parade have a role to play in Sona evening? Let us know what you think in the comments!