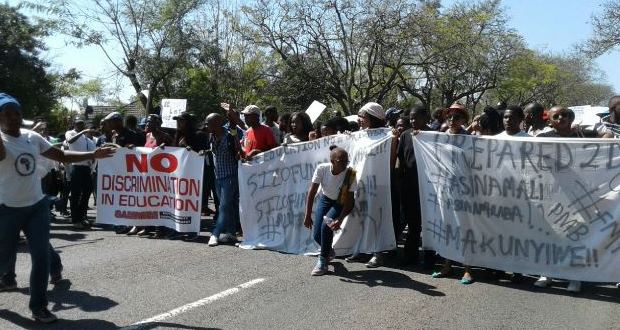 Students across the country have rebuffed higher education minister Blade Nzimandeâ€™s recommendation of an 8% fee increase for 2017, as well as his proposal for a financial aid scheme that would see fee increases for poor and middle-class studentsâ€™ tertiary education fees covered by the state. This turn of events has left many onlookers outside the academy scratching their heads. The students got what they want, right? So why are they still protesting? Weâ€™ll try to answer your questions.

What do the students want?
This question is really difficult to answer. The first thing we must realise is that there isnâ€™t one huge coordinated mass of students in the country. We are speaking here of thousands of people, with views that are sometimes aligned and sometimes in competition with each other. Each university has its own factions and groupings and factions within groupings, and political leanings, and individual agitators.

For example, at Wits University, you have:
– the group that calls itself #FeesMustFall, also referred to as the â€œfallistsâ€;
– among the fallists, there are those who see themselves as an intersectional feminist grouping;
– the SRC, which is PYA-lead and therefore ANC-aligned;
– the EFF Student Command, many of whom are also fallistsÂ but obviously clash with the PYA;
– non-aligned students who are also protesting; and
– former student leaders with political links who have returned to join protests.

This is just at Wits, and by no means an exhaustive list.

Student groups at UCT, at UP, at UKZN and so forth each have their own priorities and agendas.

Broadly speaking, the students want free education but itâ€™s unclear whether they want free education for the poorest, or for everyone. And whether they want it now, or in our lifetime. They want a decolonised university but itâ€™s unclear what specific steps they want to be taken in order to achieve this in the immediate future. They want an end to patriarchy, which violates the rights of women, LGBTQI people, and other minorities. They want safer campuses, and they want an end to militarised campuses. And they also want an end to outsourcing, and fair labour practices on university campuses.

Five #FeesMustFall activists on the future of the movement

Who speaks for the students?
There is no one person or group of people who can speak for the students. This is a broad movement that shuns the idea of having a figurehead or a leader. It prizes the notion of a leaderless movement, in which everyoneâ€™s ideas and views are given equal weight.

The students have deliberately avoided selecting any one person to speak on their behalf, to avoid the risk of that person becoming the face of the movement. For the students, there should be no single face to the movement; instead, all students’ contributions should be valued. This is why Nompendulo Mkhatshwa, who became a figurehead for the movement at the height of the 2015 protests, was this week booed off stage at a Wits student gathering.

Wits masses are problematising the fact that Nompendulo was going to speak. “If you want to be a celebrity, go celebrate yourself outside”.

But such movements have been criticised as being impossible to maintain, not because they do not have a figurehead but, as columnist Byron Williams writes, because they do not have a â€œclear and concise message that participants can agree that also carries the power of moral persuasionâ€. A leaderless movement, he says, has â€œonly the power of its own efforts to sustain itâ€ and â€œrarely, if ever â€¦ [carries] the momentum to endure long enough to see the change it desiresâ€.

So why are they still protesting today?
Because they want a revolution – a complete break with the status quo – and theyâ€™re not satisfied with promises of a no-fee increase for some students, and Nzimandeâ€™s deferral of the decision-making on the broader fee issue to treasury and universities.

In the context of their broader demands and discontent, Nzimandeâ€™s announcement yesterday was a slap in the face. He spoke only on a very narrow issue (fee increases) and resolved this issue only for a portion of the student body.

Broader questions about free education, decolonising the university, patriarchy, outsourcing, and basically taking studentsâ€™ concerns seriously were not even acknowledged.

Come on, they want Nzimande to end patriarchy?
The students want their concerns to be acknowledged and validated. But since you asked, yes, sexual violence on campus is an issue that needs greater attention, thank you very much.

Nzimandeâ€™s problem is that he is still making pronouncements from an ivory tower and refusing to engage with students in a substantive way.

Nothing illustrates this more clearly thatÂ  the incident during Nzimandeâ€™s briefing on Monday, when a student from the University of Pretoria tried to pose a question and was immediately shut down by the department, who told him that this was a briefing for the media, and that he should engage with the department outside of the briefing.

But when has Nzimande ever engaged with students, directly? There is literally an entire hashtag, #WhereisBlade, dedicated to the fact that the higher education minister has consistently refused to engage with students on the issues they have.

In a country that has seen an average of three protests a day between 2013 and 2015, the studentsâ€™ protests are simply the most visible expression of a growing discontent with the stateâ€™s inability to deliver on its promises and its unwillingness to engage constructively with aggrieved groups.

So how does this all end?
It probably doesnâ€™t. Depending on who you speak to, these protests could either become a regular feature in the academic year or they could be the beginning of a larger political movement in the country.