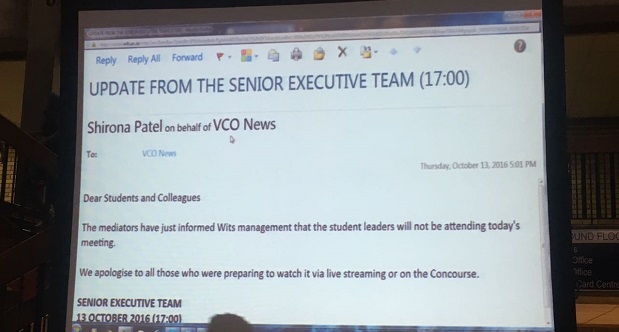 It’s been a busy week for the Wits community – #FeesMustFall protesters and management alike. The Daily Vox tries to make sense of who’s been saying what and why.

Why did the first General Assembly fall through and whatâ€™s happened since?

The first attempt at a General Assembly was thwarted by a number of factors. The fallout, however, was related to what format the meeting would take – students wanted an inclusive, transparent imbizo – while management sought to uphold the traditions of a general assembly. Then there was also contention over whether there would be a commitment from students for the academic programme to continue on Monday in exchange for management committing to supporting the call for free decolonised education.

In the impasse, students have committed to continue the university shutdown and management have upped security. This week, then, was a power struggle between students and management.

On Monday, students mobilised large numbers and managed to effectively disrupt campus – as we know, it didnâ€™t end well. Water cannons, an army of police, a priest shot point blank, a bus flaming in Braamfontein and the intense battle scene on the Great Hall piazza took its toll on students.

By Tuesday, the numbers of student protesters had dwindled significantly and students attempting to disrupt Wits faced a greater, and more organised, police force. Any groupings that congregated near the Great Hall piazza were indiscriminately dispersed with stun grenades, rubber bullets and the water cannon.

By Wednesday, things were mostly peaceful at Wits, despite a heavy militarised police presence.

But then how did negotiations come back onto the table?

While this power struggle waged on, independent mediation was going on between students and management. On Tuesday, management conceded that it would be willing to have an imbizo â€œprovided that it doesnâ€™t fall into teaching time, it is facilitated independently, it allows for two way conversation and is planned in advanceâ€.

Students then met on Wednesday night to discuss the terms of the negotiation. Student leaders informed the masses that the proposal was for student representatives (20, 15 or 10 depending on who you ask) to meet in private with Vice Chancellor Adam Habib and his team while the meeting is live streamed to Solomon Mahlangu house where the Wits community could watch – to ensure transparency. The other commitment that was ensured in the studentsâ€™ mass meeting was that the academic programme would not continue for the day of the negotiation, to allow for broad attendance on behalf of all university stakeholders.

Students communicated these terms to the mediators and later informed the rest of the students that Habib agreed to the terms. The negotiation was to take place at 9am on Thursday.

So what happened with the negotiations then? Why didnâ€™t they take place?

So hereâ€™s where it gets messy. According to incoming SRC secretary David Manabile, later on Wednesday night Habib met with his Senior Executive Team (SET) who apparently disagreed with the studentsâ€™ terms. A message was then sent to student leaders in the early hours of the morning stating that management would not be willing to close the university for the negotiations.

We agreed to a 9 am meeting on 2 conditions – it would be live streamed at SM House and there would be no classes. The university refused https://t.co/qkYcOSYN4f

On Thursday morning, student leaders then called for a mass meeting to inform everyone of managementâ€™s decision – it is not clear how well attended this meeting was as it was not well-communicated. Students stood by their original conditions and called out Habibâ€™s refusal to negotiate. Habib released a video later that day clarifying that management were open to engagement, but not on the studentsâ€™ terms.

So on all accounts the negotiations fell through. But this was not communicated to most students, who thought the negotiations were to take place at 5pm, as was implied in Habibâ€™s video. What makes things even more confusing is that a segment of student leadership – individuals from the current and incoming SRCs – are said to have met with management and agreed for the live-streamed negotiations to take place later that day, while other leaders claim no knowledge of such a meeting ever taking place.

Shirona Patel, Wits spokesperson, says that management met with students on Thursday and that there were processes in place to arrange for the live-streamed meeting to take place later in the day.

Yet as students entered Solomon Mahlangu house at 5pm, displayed on the projector intended to stream the meeting, was a message from management informing students that student leadership had decided not to attend the negotiations.

So who are management actually in negotiations with and why are student leadership not all on the same page?

It is unclear which individuals within student leadership are still in talks with management and whether the decision not to meet at 5pm refers to the standing decision from the morning – or to a decision that was taken with the mediators and management afterwards.

But student leaders Mcebo Dlamini, Vuyani Pambo and others have expressed sentiments that certain members of the Wits SRC have been meeting with Wits management in private and are potentially â€œselling outâ€ the cause by doing so.

What is certain is that the non-SRC student leaders have, at the very least, been taking their mandate from the masses for the shutdown to continue and made themselves accountable to them for what transpired on Thursday. Incoming SRC president, Kefentse Mkhari, and some other SRC figures were not present at the mass meeting that followed the confusion of Thursday.

Whether this implies fractures in leadership or simply a lack in communication, however, is unclear.