Home Fascination When no other work can be found, they become hairdressers
WhatsApp
Facebook
Twitter
Email
Print 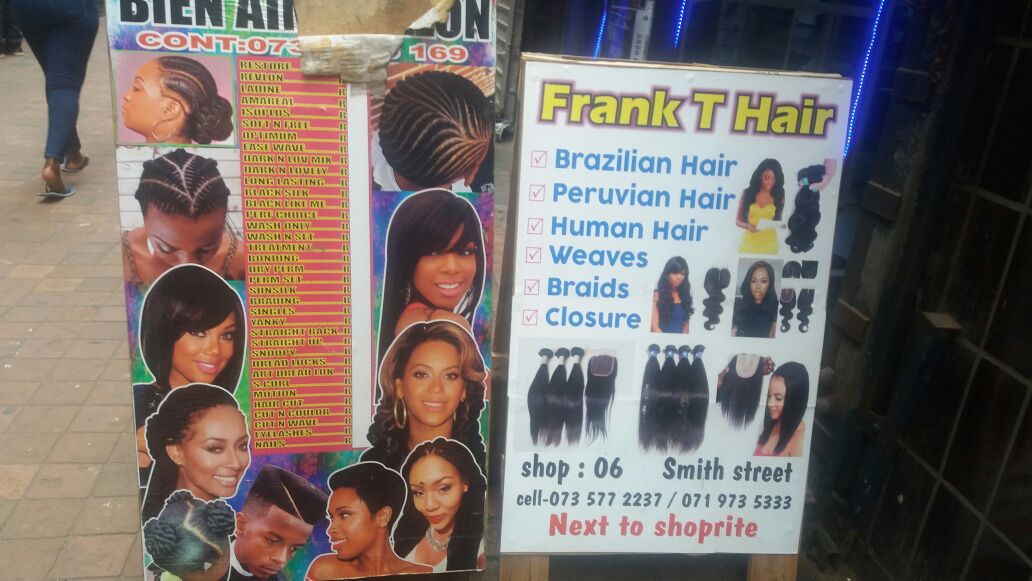 They come from near and far to Durban, hoping to find work and provide for their families. When nothing can be found, they must stand in the scorching hot sun all day, every day, and persuade passersby to step into their salons to do their hair or nails. With work scarce in the port city, the competition amongst these informal beauticians is tough.

“To many, we are just a lazy bunch but because we know our struggles, this is our job,” says the 38-year-old Thembi Zulu from KwaNongoma. In a morning rush, minibus taxis are moving rapidly along the busy Pixley kaSeme Street in Durban, and conductors are gesturing at pedestrians and asking: “uyahamba mfethu?” (Are you going, my brother?)

Zulu is sitting in a plastic chair in a corner just outside a Hungry Lion fast food franchise, where she is trying her best to induce customers to come and do their hair. She holds out a placard with different hairstyles for people to see what’s on offer. She explains that although this may seem as a lazy job, it is not as easy as people may think.

“People don’t understand that this is what we do for a living. We meet different people with different personalities on daily basis and we have to accommodate everyone,” she says.

With the high rate of unemployment in South Africa, many people find themselves doing jobs they had never dreamt of. Like many other people in the streets of Durban, Zulu came all the way from KwaNongoma, which is 300km to the north, to try her luck in finding a decent job. She never got lucky, making it hard for her to make ends meet.

Beauty services are in high demand in Durban, but with the growing number of salons located close to each other, competition is fierce. Almost each and every street corner is packed with women, young and old, holding out placards and calling on people passing by to come do their hair and nails.

With so many beauty salons built close to each other, one may wonder how these women, whose job is to sway as many customers to walk into salons, make money.

According to Siphokazi Tshomela, 34, more people are coming into the city to look for jobs but when they hit a dead end, they resort to hairdressing.

“Hairdressing has become a booming business over the years and that’s probably because it’s something most women can do. Some of us came to the city looking for jobs but when we couldn’t find anything we looked at the salons,” she says.

Tshomela came all the way from Mthatha in the Eastern Cape to find a job and support her family, but when nothing came up, she decided to look at a nearby salon. She noted that not all people who work at the salons are actual hairdressers. They have to stand in the streets and try and persuade people to go into the salons.

“It’s a very challenging job because you have no basic salary. There are days where I go home with no money, after standing in a scorching hot sun the whole day,” she says.

In a typical day she is able to take home a R100 with her, but it all depends on the time of the month. “December is always a good time because more people want to do their hair and nails, but January has been tough,” she added.

Tshomela agrees with Zulu that many people don’t think what they do is a job. She says that other people go as far as telling them to move away from their spots as they are blocking the way.

“We have to tolerate clients and people who treat us as though we are not human enough, on the other hand we have to deal with the municipality chasing us away. It’s very frustrating because we are fending for our families,” Tshomela says.

She highlights that one of the biggest challenge is being unable to consistently provide for her family, with the kind of money that she makes, which varies from time to time.

“I can’t even budget because I don’t get to make the same amount of money every month end. But I still have to pay rent, provide food for my family and travel to work. It’s all really hard,” she said.