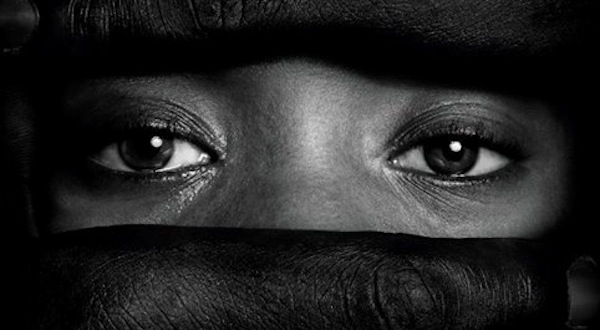 What happens when racism, Islamophobia, and #BringBackOurGirls collideÂ in a single advertisement for charity? More to the point, how doesÂ that even happen? RA’EESA PATHER explains. I tried to ask the gurus atÂ OgilvyÂ and Mather DurbanÂ what exactly they were snorting when they conceptualised an ad forÂ womenâ€™s abuse organisation, The Sahara Shelter, but they remained mumÂ â€“ our creative director is out of town, they said. Be that as it may,Â the ad is still fluttering around as a demonstration of just howÂ backward advertising in this country is.

Initially when I looked at the ad, I saw a black woman in purdah â€“ aÂ religious practice in certain Muslim communities where women coverÂ their entire bodies with the exception of their eyes. Among young South African Muslims, purdah is oftenÂ translated as â€œninjaâ€. (My but those women dress stealthily.)

The slogan â€œYour voice is her voice #BringBackOurGirlsâ€ was mindlesslyÂ plonked in the bottom left corner of the image, while The SaharaÂ Shelter had stamped its logo at the opposite end.

Clearly,Â OgilvyÂ and co. were getting into the Ramadan spirit byÂ announcing Muslim women do not have a voice and somehow need to beÂ saved from their fabric prisons. Firstly, this is not France. There is no burka ban.Â Secondly, Muslim women have voices. Have you not heard aboutÂ so-and-soâ€™s aunty who messed up the biryani?

But then I looked at the ad again. I squinted at it and saw that whatÂ I had mistaken for purdah was actually black hands. How visionary.Â Guess some people are still awaiting the swart gevaar.

The ad was donated to The Sahara Shelter by the Afrisun Casino Group.Â According to Afrisunâ€™s Phumla Mutle, the groupâ€™s previous CEOÂ sponsored the ad, and the current CEO knows nothing about it. Itâ€™s aÂ casino, but they donâ€™t know what theyâ€™re spending their money on.Â Crikey.

Last year, the World Health OrganisationÂ reported that 60,000 women and children were victims of domestic abuseÂ each month in South Africa.

Globally this numberÂ is unmatched: when it comes to harming women and children, nobody doesÂ it better. And these are just the cases that are reported to theÂ police.Â Charities like The Sahara Shelter, which provides transitional accommodation to abused womenÂ and their children, are not only necessary in South Africa, they are aÂ priority.

But does this justify the advertâ€™s racial slur? AroonaÂ Chetty, director of the organisation, said that the shelter hadnâ€™tÂ thought of these questions and insisted that domestic abuse isÂ perpetrated by â€œall racesâ€.

In using black hands to evoke domestic violence, to show a woman beingÂ pinned down and silenced, the ad perpetuates stereotypes that raciallyÂ target black men as barbaric patriarchs. Black men are not the only perpetrators ofÂ domestic abuse in South Africa, or have you not listened to enough Oscar Extra?

The use of #BringBackOurGirls is puzzling. Ultimately, we need to giveÂ as much attention to South African women as we would to thoseÂ schoolgirls in Nigeria. If not, we ourselves become abusers.

It seems as though the adÂ piggybacks onto the plightÂ of the Nigerian girls and their suffering to sell the torment of our women at home.Â But this is advertising and what are ethics anyway?

Still, #BringBackOurGirls ties into the Islamic context of the image.Â DidÂ Ogilvyâ€™s crÃ¨me de la crÃ¨me really not see the similarities? BlackÂ hands morphed into purdah to highlight domestic abuse; a double slapÂ to two communities who face constant prejudice. By feeding into theÂ bigotry â€“ even if it is unconsciously so â€“ the ad-makers areÂ ironically stifling the voices of the people they seek to help. AndÂ the â€œyouâ€ that they speak to â€“ presumably the white saviours of theÂ world â€“ becomes complicit in making the voiceless even more voiceless.

In the wake of Ogilvyâ€™s recent Feed A Dog â€“ Â err, Child â€“ debacle, itâ€™s clear some of the nationâ€™s brightestÂ visionaries are in fact blind. Itâ€™s time they open their eyes to theÂ reality of society instead of trying to make a quick buck off theÂ racist rhetoric that still manipulates so many minds today.