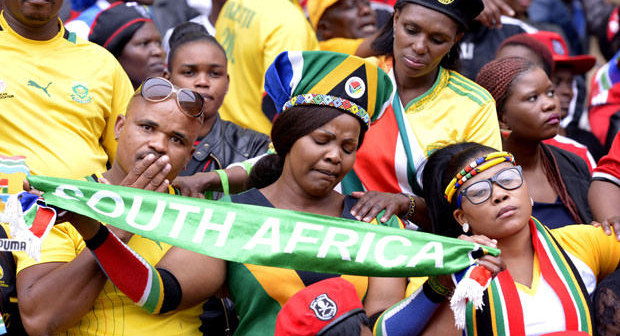 The South African football teamâ€™s African Cup of Nations qualifier against Mauritania was described as a â€œmust winâ€ by Bafana Bafana head coach Shakes Mashaba but it was nothing short of a national disgrace. MICHAELSON GUMEDE explains where the Mashaba went wrong.

At the weekend, Bafana suffered a 3-1 defeat at the hands of the tiny, poverty-stricken north African nation, which has a population of less than four million.Â To describe the loss as humiliating would be an understatement. Bafana now sit at the bottom of Group M with four games to play. Itâ€™s a tight spot to be in as only the team at the top of the group will go through to the next round. We might as well kiss Afcon 2017 goodbye, but whatâ€™s new? This isnâ€™t 2012 and we donâ€™t have a free ride into the finals because of hosting privileges.

The magnitude of this loss cannot be overstated.

There are players on the Bafana squad who play abroad, some players were members of the team that defeated then world champions Spain in 2013, and we boast of having one of the best football leagues on the continent. And yet we just lost to a team that is ranked 42 places below us on the global rankings, a nation so underdeveloped that itÂ still practises slavery.

Things started going wrong for Mashaba when he selected the team.

The national team should, at all times, be represented by the current best performing players. Yet players like Thulani Serero, Sibusiso Vilakazi and Dean Furman, who have hardly kicked a ball all season, were selected.

Dean Furman, who failed to impress in Europe, got selected ahead of Oupa Manyisa, who has a host of experience playing in difficult conditions on the continent.

Siphiwe Tshabalala or Teko Modise (old but gold) were left out, despite being among the in-form players this season.

How do you explain having a squad with only one Orlando Pirates player in the starting line-up, when even Fikile Mbalula knows that Pirates are the ambassadors of South African football across the continent?

In brief, Mashaba once again underestimated the opposition. Youâ€™d have thought heâ€™d have learned after we were humbled by Botswana, and failed to beat Lesotho in recent encounters.

It turns out that the heat was literally too much for Bafana. Surely the Boks will do a better job as they head into the Rugby World Cup. Transformed or not, at least theyâ€™re a team we can always count on.