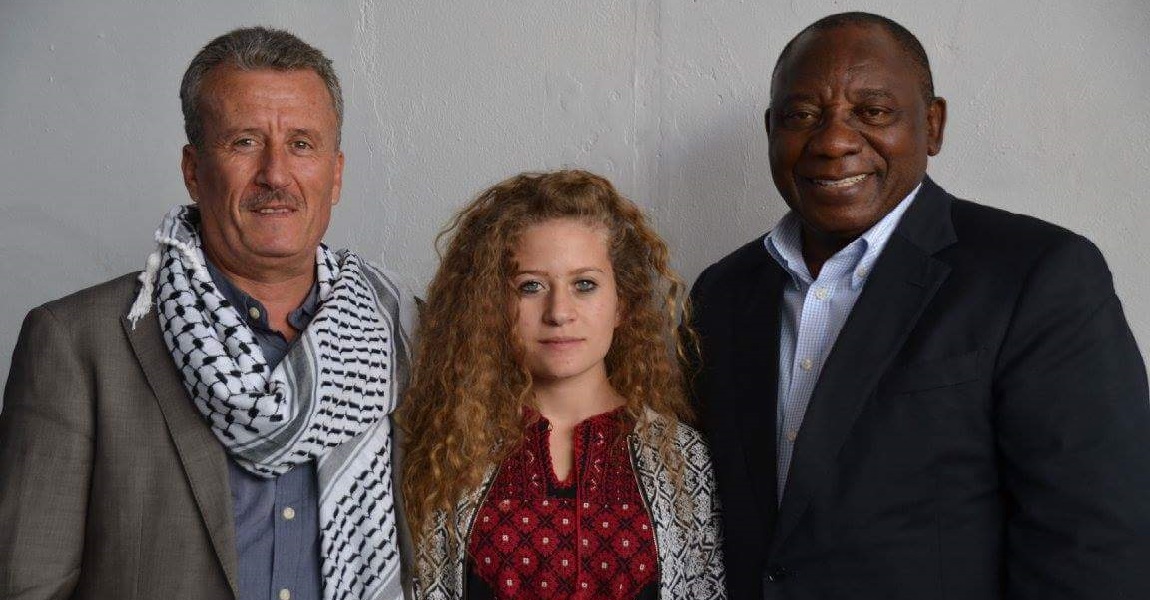 The trip I took to Palestine in December 2014 granted me the opportunity to better understand what life under Israeli occupation looked and felt like for Palestinians, writes SHAEERA KALLA.

I remember thinking: â€œthis is apartheid.â€

I had thought that being aware of the situation there, and its political and historical significance, would have prepared me for the shocking reality.

One place that stood out for me was Nabi Saleh, a village in the West Bank largely located in what is known as Area C, which is under Israeli military and civil control.

Through the expansion of its settlements, in particular the illegal Isreali settlement Halamish, Israel has stolen Nabi Salehâ€™s land and water spring, a crime Palestinians in the area refuse to accept lying down.

In this tiny village populated by around 600 people, we met Nariman and Bassem Tamimi, who invited us into their home. We did not get to meet Ahed, their only daughter and her two brothers, but from the way they spoke about their children it was clear that they were the reason their parents stood so strongly against the occupation.

For the past 10 years the residents of Nabi Saleh, from young children to the elderly, have marched every Friday from the entrance of their village to the military barrier to protest the theft of their land. Growing up, the children of the Tamimi family have been exposed to the backlash that these peaceful demonstrations have had from Israeli Occupation Forces. From the protesters, at most, stones have been thrown; Israelâ€™s response has been teargas, rubber bullets, water cannon, skunk water, tear gas and live ammunition.

Four years later as I write this, Nariman and her daughter Ahed sit in Israeli prisons.

Ahed has been sleep deprived and transferred between at least three different detention centers and prisons, but she has yet to be charged with any crime. In settlements like Halamish, Israelis live under civilian law, while Palestinians in Nabi Saleh live under military law. Administrative detention therefore is a common experience. Nariman and Ahed have been trialed in a military court with almost 100 % conviction rate. If they were Israeli they would not be in this situation. Thus the irrefutable apartheid nature of Israel is exposed.

According to prisoner rights group Addameer, the number of Palestinian child prisoners in Israeli jails has doubled over the past three years. As of December 2017, 450 children are in prison and have experienced the kangaroo courts of a military trial where Israel is the judge, jury and executioner.

Sceptics forget that it is not just Palestinians who have made the comparison between Israel and apartheid South Africa, it has in fact also been South Africans, like Archbishop Desmond Tutu for example. Palestinians like Ahed are born into activism, they have no choice but to resist. This is precisely what led black South Africans to resist apartheid. And on December 15 2017, Ahed was caught on camera doing just this, defending herself and her home, her entire existence. A video shows her slapping an Israeli soldier, the part that went viral at least. In the full video, the cold slap that the soldier gave Ahed before is clear to see here. It was this act of self defence which led Israeli Occupation Forces to raid her home in the early hours of the morning on December 19 2017. Ahed was not allowed a guardian despite being a minor, and when her mother was called to come to the hearing, she was arrested there.

Just before the viral video of Ahed slapping an Israeli soldier was taken, her younger cousin Muhammad Tamimi was shot in the face at point zero distance, by a rubber coated steel bullet. He lost part of his skull and was in an induced coma for a week. The soldier she slapped wanted to enter her home, located on a hill, to shoot at people, children, like Muhammad. If this were your home, would you welcome the soldier in? Probably, if you were fearful and scared of the consequences of not doing so. But Ahed has proven through resisting and putting up a fight, that she is not fearful. It was this act of self-defense that landed her in prison, after Israeli Occupation Forces raided her home in the early hours of the morning on 19 December 2017.

Nariman and her daughter Ahed remain in different Israeli jails and Ahed will likely miss her school exams. She spent her 17th birthday (31 January) in a cell, as her court date has been postponed yet again to February 6. Ahed is no different to children in other parts of the world who have lost the privilege of childhood to a system that is dehumanising and deadly. There are no two sides in this story, there is no controversy here, there is only the fight for justice and equality and Ahed has bravely taken up this fight.

Shaeera KallaÂ emerged as one of the leaders in the Fees Must Fall protests of 2015 and 2016. She is a former SRC President at Wits University where she studied a Bachelor of Commerce in Philosophy, Politics and Economics, holds an Honours in Political Science and will be pursuing her Masters in Political Economy. She is an avid reader, keen writer and above all else, an activist. You can follow her on Twitter @shaeera_kÂ