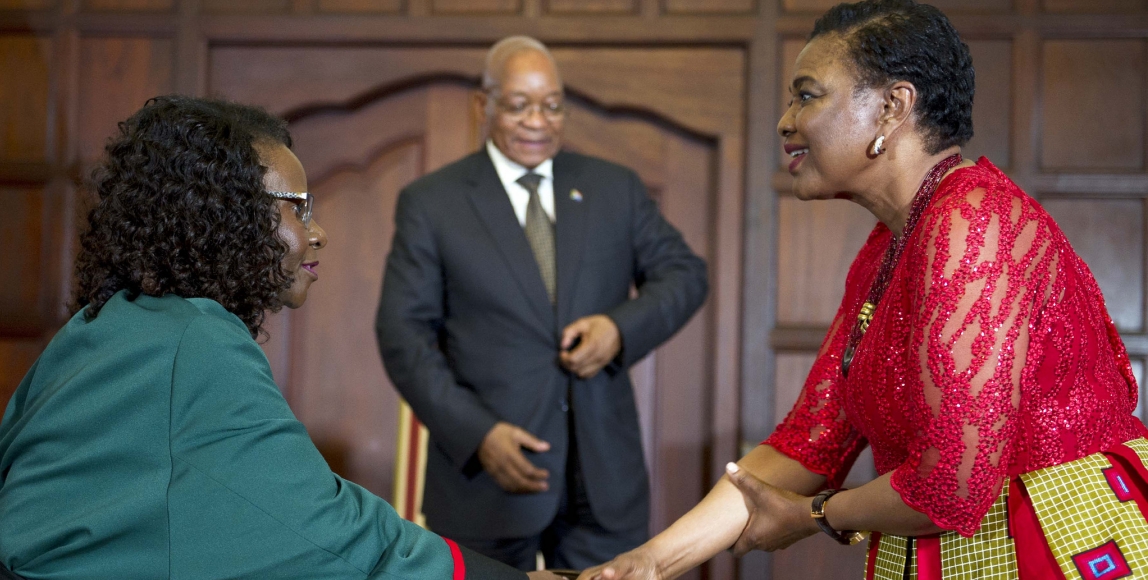 On Tuesday, President Jacob Zuma suddenly announced a Cabinet reshuffle – his second in 2017 – where he finally removed the Department of Higher Education and Training (DHET) minister Blade Nzimande from cabinet. The reshuffle means that the DHET is now in the hands of Hlengiwe Mkhize, formerly the minister of Home Affairs, who had been in that position for just 6.5 months.

She must now deal with, among many other issues, the fight over the Commission of Inquiry into Higher Education and Training (Fees Commission) and the continuing spates of violence on university campuses. The Daily Vox rounds up what she’s really about.

Mkhize is an experienced lecturer, diplomat, and bureaucrat

Mkhize holds a bachelor of arts in psychology, social work and sociology from the University of Zululand, a BA (honours) in psychology, and a masters of clinical psychology from the University of KwaZulu Natal. She was a senior lecturer and researcher at the University of Witwatersrand from 1990 to 1995. She was a board member of the South African Prisoners Organisation for Human Rights from 1994 to 1995, a commissioner of the Truth and Reconciliation Commission and chairperson of the Reparations and Rehabilitation committee from 1995 to 2003. From 2005 to 2008 she served as ambassador to the Netherlands.

When Zuma was elected as president in 2009, Mkhize became a member of parliament (MP) after being elected to the national executive committee of the ANC Women’s League in 2008.

She’s been in ministerial positions since 2014

In 2014 she was made a deputy minister in the newly established telecommunications and postal services department.

“Her appointment was marred by controversy after she bought a Lexus ES250 for about R500,000 and a Jeep Grand Cherokee for slightly more than R600,000 after taking up office,” the Mail & Guardian reported. The paper also described her as a close ally of Zuma.

Her very short tenure at Home Affairs was contentious

When Malusi Gigaba was Home Affairs minister in 2015, he controversially granted South African citizenship to certain members of the Gupta family – the centre of the state capture scandal which has overwhelmed the country for more than a year now – in spite of an initial rejection by departmental officials. When asked about it in parliament in August, Mkhize told parliament that the minister had the power to grant citizenship under special circumstances. In this instance, the Guptas got it because of their “investments” in South Africa. Members of parliament did not like this answer, and said to the minister that in fact the evidence was that the family was about to flee the country due to the state capture controversies. Her response, which further angered them was: “We have to treat people with dignity. We treat matters of this nature within the parameters of the law. We should be guided by the outcomes of that process.”

In September, Mkhize announced the precautionary suspension of the Home Affairs director-general (DG) Mkuseli Apleni. The statement gave no reasons, simply stating: “Mr Mkuseli Apleni has been placed on precautionary suspension as of today, September 18 2017.” However, in June Apleni testified before the parliamentary committee on home affairs that the naturalisation of the Gupta family had not been tabled before parliament, as is required in law. (He said that the process itself had otherwise been above-board.)

Apleni challenged his suspension in court, and the reshuffle was publicly announced literally in the middle of a hearing on Tuesday, resulting in the rather preposterous situation of the judge sitting in on a case involving a DG and a minister who’d been moved into a different portfolio.

Short answer: no. So unless Judge Fabricius read online news over tea, he has no idea #Apleni now reports to a new minister.

Apleni further alleges in his court papers that the minister has interfered in departmental matters, including a dispute with the wealthy Oppenheimer family over a VVIP terminal at OR Tambo International Airport, and a R300-million claim by a company called Double Ring Trading 222.

MPs are not fans of Mkhize

The Apleni controversy has followed Mkhize to the DHET. After the reshuffle was announced, the parliamentary select committee on social services released a statement saying that she had still not explained why she had suspended the DG.

“While the Committee acknowledges that the Director-General has taken the matter for judicial review and that the matter is between an employer and employee’ the Committee is of the view that the Minister could have taken the Committee and Parliament into its confidence about the suspension’s especially as it relates to service delivery.”

“This is because the Director-Generalâ€š as the accounting officer according to the Public Finance Management Actâ€š is critical to service delivery and governance of the department’s committee chairperson Cathy Dlamini said.

So even though Mkhize has now shifted portfolios, parliament is still demanding answers about her treatment of Apleni.

A statement released by the South African Communist Party (SACP) in reaction to the reshuffle said that Zuma had made the decision to remove Blade Nzimande from the DHET was a “direct attack” on the party. The SACP, ANC and Congress of South African Trade Unions (Cosatu) are in a tripartite alliance since 1994, and the union federation and SACP were instrumental in helping Zuma come to power. However the relationship has soured with the SACP becoming increasingly critical of the president’s relationship with the Gupta family.

In September, leaks began to circulate in the media that Zuma was going to axe Nzimande from the cabinet. It has finally happened.