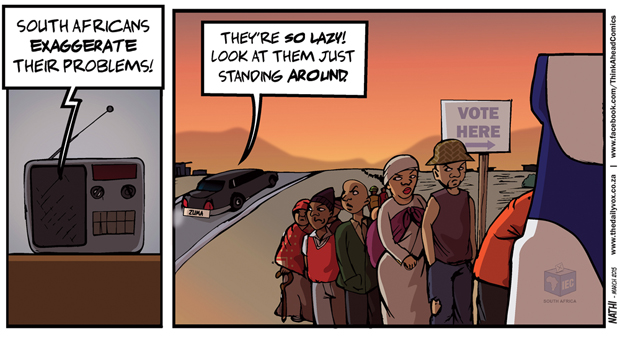 Last week President Jacob Zuma said that South Africans were â€œlazyâ€ and â€œexaggerateâ€ their problems. He went on to accuse SA citizens of waiting for the government to sort everything out, instead of taking their own initiative.Â Freedom is â€œnot something in the air,â€ Zuma stated.

Erm, yes, Mr President. I think as a country weÂ are well aware that freedom is not â€œsomething in the airâ€: after all, many South Africans patiently stood in queues to cast their votes last year â€“ the majority of them for you and the African National Congress.

So just who is being lazy here? Is it really South Africans? â€™Cos the only laziness we see is a certain laziness of thought.