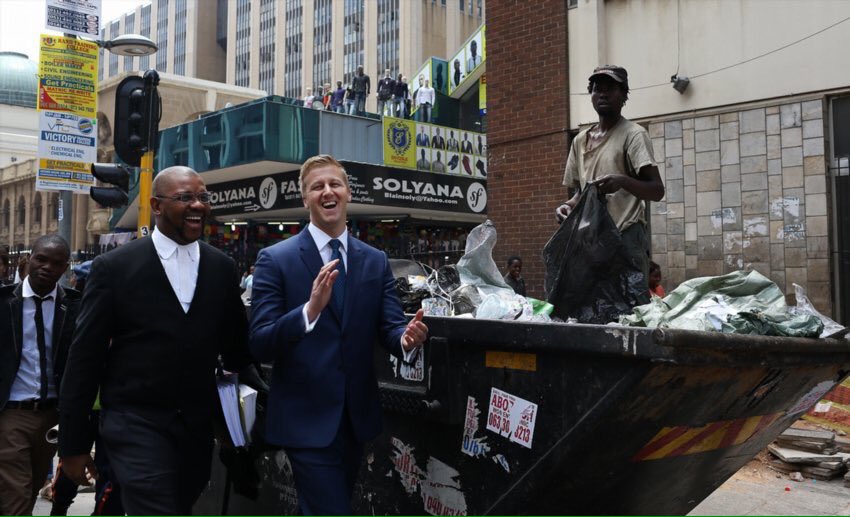 A powerful photograph of Gareth Cliff and Dali Mpofu laughing as they walk past a man digging in a rubbish bin is making waves on social media.

South African writer TO Molefe posted a tweet with the picture, wondering who the photographer was. He was later assisted by a tweep, who confirmed that Times Live photographer Alon Skuy had taken the shot.

Wow. This picture. Economic freedom for who? For what? Who’s the photographer? pic.twitter.com/UpQY8lDVIF

Ah, the photographer is Alon Skuy for Gallo, seemingly taken earlier this week. Thanks, @MabandeOpenBeta.

Some saw the picture as a display of irony at its finest, with Fikile Mbalulaâ€™s spokesperson Esethu Hasane posting an edited version of the picture, asking whose freedom exactly it is that Mpofu is fighting for.

Which brings us to ask: ” whose economic Freedom ” are they fighting for ? pic.twitter.com/CFEkSXQ6U4

Cliff was reinstated as an â€˜Idolsâ€™ judge on Friday after the High Court ruled in his favour. He had launched an urgent application on Tuesday asking MNet to reinstate him or pay him R25 million in damages. Some saw the outcome as quite surprising, and weighed in on social media with some amusement.

When Gareth Cliff returns to Mnet after winning his case. #GarethCliff pic.twitter.com/Q7uI7mjX2E

High profile advocate and national chairperson of the EFF Mpofu represented Cliff in the case, and was criticised earlier in the week for making comments which some viewed as quite contrary to EFF values.

#GarethCliff Mpofu says Cliff was discriminated against because he is white.

Skuy is an award-winning photographer, and is revered for his hard-hitting photography. He has shot in Marikana, service delivery riots in Soweto and famously shot the 2008 New Years Eve Hillbrow police raids.