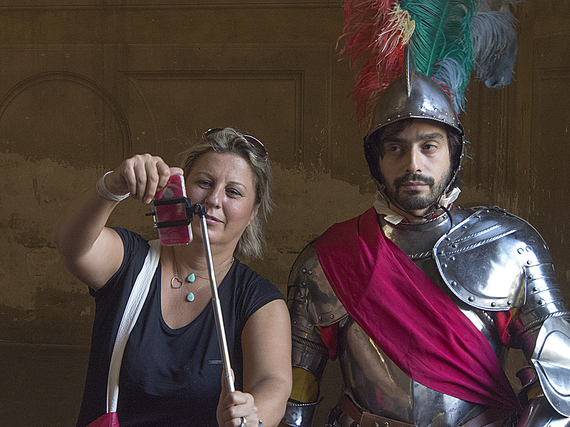 Last year, the Oxford English Dictionary announced “selfie” as its word of the year. The vaunted gatekeepers of the English language said, “It seems like everyone who is anyone has posted a selfieÂ somewhere on the Internet.” But it’s not until 2014, that the selfie has become a part of everyday life. Everyone from your great aunt ZeldaÂ to Fikile Mbalula gets their selfie on. Our resident selfie queen, AAISHA DADI PATEL, takes us through this, the golden age of the selfie.

Many, many celebritiesÂ share this logic, too. In late 2013, at Madiba’s memorial service, Danish Prime Minister Helle Thorning-SchmidtÂ was caught taking a selfie with US President BarackÂ Obama and British PM David Cameron. And while that particular selfie caught the ire of many who questioned whether it was in bad taste, funeral selfies are actually a thing.

But US funeral director and blogger, Caleb Wilde, Â has since come out in a rousing defence of funeral selfies, saying that selfies are actually an attempt to foster a sense of belonging. “So, a funeral selfie isn’t about stupid kids and their narcissistic attempts to express themselves. It’s about how they/we relate with a world that’s being defined more and more by globalisation and fragmentation… it’s about belonging.”

Did he just use words like ‘fragmentation’ and ‘globalistion’ in trying to explain selfies? Boo!

Anyway, with nearly 3.5 million retweets, the ‘Oscars selfie’ taken in March 2014, is not only the most retweeted tweet in history but also consequently one of this most famous images of all time. Angelina Jolie, Meryl Streep, Julia Roberts, Jennifer Lawrence et allÂ all packed intoÂ one image? It’s almost too good to be true.

If only Bradley’s arm was longer. Best photo ever. #oscars pic.twitter.com/C9U5NOtGap

Selfies have been making it big on the local front too – Minister Fikile Mbalula loves taking them, no matter what the occasion. On cue, the Mail and Guardian dubbed him the ‘Minister of Selfies‘.

As if that wasn’t enough – let it not beÂ forgotten that the ‘selfie stick’ (a scope which allows you to take selfies from a distance with the help of a Bluetooth remote) made it onto TIME’s list of the 25 best inventions of 2014. Woah!

But of course, ifÂ you needed any further confirmation that 2014 was indeed the year of the selfie, Kim Kardashian, not one to be outdone by anything, including a selfie, announced recently that she will soon be releasing a “selfie book”, aptly entitled Selfish. Watch this space.