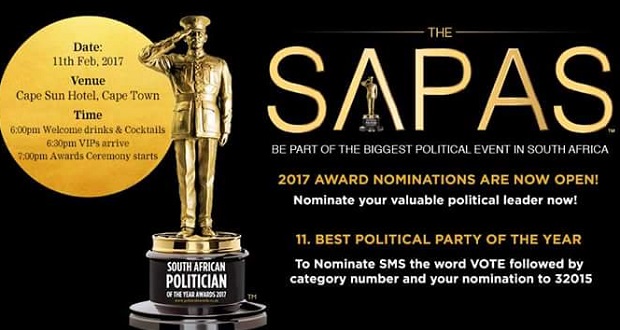 The South African Politician Awards (SAPAs) will be taking place on 9 February in Cape Town. These awards are aimed at celebrating the work of politicians across the country, but raises some issues on celebrating people who are supposed to be serving South Africaâ€™s citizens – some of whom havenâ€™t be doing a very good job of it.

So what makes these awards so problematic? Well, here are five reasons:

1. We shouldnâ€™t praise politicians for doing their jobs

While some politicians have been doing a great job, sadly, this isnâ€™t the case for the majority.Â Corruption is still a big issue in South Africa – we cannot deny this.

Just last week, The City of Mbombela started to clear out corrupt officials who were involved in fruitless and irregular expenditure of R755 million over the past two financial years. Letters were then sent to 77 officials demanding they explain their roles in various tender improprieties.

The State Capture report even implicated President Jacob Zuma himself in having ties with the Gupta family, allowing them to influence the appointment of ministers or board members to state-owned companies.

So why should we celebrate our politicians if many of them are embroiled in allegations of corruption, mismanagement, and even state capture?

Since the announcement of the awards, weâ€™ve been wondering whoâ€™d be paying for this lavish event, which is set to take place at the Cape Sun Hotel. The company organising it is Ngavu Enterprises, a sponsorship consultancy and celebrity management agency. It is run by entrepreneur,Â Lloyd Ngavu, who said that he is funding the event himself and will use the profits to cover the event costs.

While the politicians themselves donâ€™t need to pay to attend the event, tickets for the public cost R500 while a hospitality package for the event costs around around R75 000. Maybe Ngavu shouldâ€™ve spent the money on things that wouldâ€™ve actually benefited the country instead of this event. #JustSaying

Thereâ€™s almost a kind of celebrity status attached to some of our politicians. Politicians such as Sports Minister Fikile Mbalula, have a huge following on social media and have become some of the most popular figures in the country.

We even have nicknames for them: we know Mbalula as Razzmatazz, and ANC secretary-general Gwede Mantashe as Uncle Gweezy. During last yearâ€™s local elections, politicians used this kind of glamour and status to try and garner more votes from the youth. There was even dabbing at some point.

Zuma’s dab is a lot better then mine ðŸ˜” pic.twitter.com/mCgnBwme96

However, these awards perpetuate this image of the politician as the celebrity. We shouldnâ€™t forget that they are politicians – elected by us – and that we need to hold them to account when they mess up.

The EFF and the ANC are both calling for their party members to not attend the event. ANC spokesperson Zizi Kodwa warned party membersÂ against attending the awards, saying that the awards â€œcelebrifyâ€ the work of politicians who are supposed to be servants of the people. ANC members have been nominated for 18 categories, ranging from best dressed to best politician.

“The greatest honour the ANC is honoured with is when it is elected by people, and that is the best award given to ANC,” said Kodwa. He also said their participation in the awards would undermine the trust that people have placed in them in terms of their political work.

The EFF has also said they plan to boycott the awards. The partyâ€™s leader, Julius Malema said they were contacted to attend, â€œbut we told them we can’t be involved in this. Politicians must not be awarded for doing their jobsâ€, he said.

5. What has the outfit got to do with the outcome?

There are two Best Dressed categories in these awards. What does this have to do with the work that they do? Dressing all fancy schmancy doesnâ€™t make one a better politician. Itâ€™s like the annual State of the Nation Address where the way in which the politicians dress seems more important than the actual state of the nation.

Why are these awards a thing?

Speaking to TimesLIVE, Ngavu said these awards, â€œmust be an inspiration to lazy MPs. [Itâ€™s a message] that communities wonâ€™t recognise you if youâ€™re not giving them service deliveryâ€.

The issue is that these awards shouldnâ€™t be used as a motivation for politicians to do their work. It should be knowing that what they do actually benefits the lives of South Africaâ€™s citizens.