Home Features Why Aubameyang was crowned CAF Player of the year ahead of Yaya...
WhatsApp
Facebook
Twitter
Email
Print 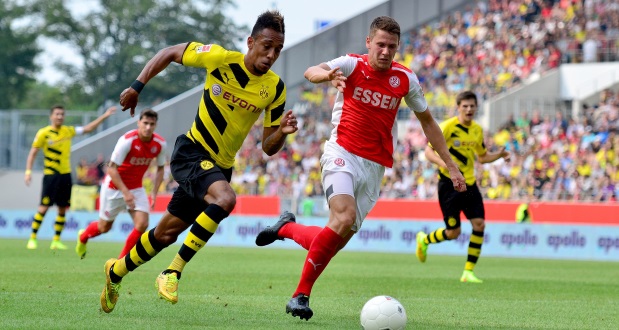 The Confederation of African Football (CAF) held their annual awards ceremony in Abuja, Nigeria on Thursday night. The event, to recognise and celebrate African football, awarded the most coveted gong of them all – the African Player of the Year – to Gabon and Borussia Dortmundâ€™s striker, Pierre-Emerick Aubameyang.Â MICHAELSON GUMEDE looks at why he was the most deserving candidate to walk away as Africaâ€™s best footballer of the past year.

While Aubameyang has maintained his performance, Yaya Toure’s form has dropped drastically. In the 2013/14 season, the Manchester city and CÃ´te dâ€™Ivoire star made 52 appearances in all competitions and found the net 24 times, to walk away with the CAF accolade in 2014. In 2015, he scored 13 times in 44 appearances. While Yaya is not a striker, the fact remains that he failed to produce the heroics that might have seen him walk away with the crown for a fifth successive time. Would it be fair to give him the award, taking into consideration that his performance dropped from his previous glorious campaign?

Aubameyang edged out Yaya with a seven point gap with his 143 points to Yaya’s 136, while considerable outsider Andre Ayew of Ghana rounded up the top three with 112 points.

To reflect on the 2015 African Cup of Nations, one must begin and end with Yaya â€“ he was instrumental in CÃ´te dâ€™Ivoireâ€™s campaign as captain, scoring some crucial goals that led his nation to glory. However, it has to be taken into consideration that Yaya plays in a star-studded team – the â€œgolden generationâ€ – as they are often called.

Meanwhile, Aubameyang features in a fairly average team in Gabon. This makes it extremely difficult, almost impossible, for a player to win international tournaments with an average team â€“ you donâ€™t choose the country you want to play for (unless you are Diego Costa).

To further put this into context, it would be like expecting three times FIFA player of the year, Cristiano Ronaldo, to win the World Cup with Portugal â€“ it is unthinkable to begin with.

So does silverware count for anything? Of course it does!

Football is a team sport and players perform to win trophies with their clubs and countries. Of course, there are awards such as â€˜team of the yearâ€™ and â€˜club of the yearâ€™, which went to Ivory Coast and TP Mazembe respectively. Yaya won the Afcon 2015 cup with Cote dâ€™Ivoire, but unfortunately, neither player won any silverware with their clubs in the season under review.

The player of the year is voted for by CAF national team coaches, captains and technical directors. We have to commend the cluster for voting Aubameyang to glory; as it wouldnâ€™t be fair to see Yaya lifting the award for a fifth time running.

African fans wouldnâ€™t want to have an Issa Hayetou on the field; one in administration is enough. We take nothing away from the big Ivorian; he will undoubtedly go down as one of Africaâ€™s greatest players in history, but his dominance is almost history. With Yaya being on the wrong side of 30, and Aubameyang on the right side of it, it’s now time to celebrate new talent. Yaya’s time is up and Africa has a new king on the throne.