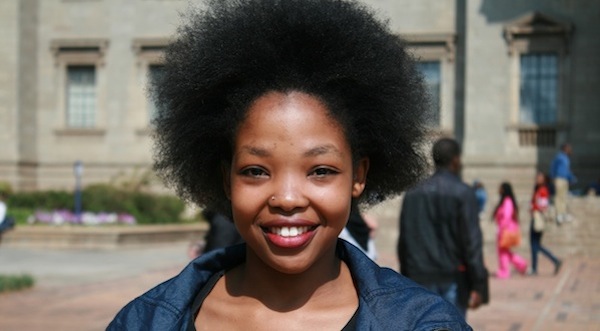 Last week,Â teachers sent a 16-year-old learnerÂ home from school, allegedly because her braids were too thick. The learner is said to have missed a week of school at the beginning of the term. In a similar incidentÂ earlier this year Nangamiso Makasi was told to either cut her five-year-old sonâ€™s dreadlocks or remove him from the school. The principal reportedly ignoredÂ Makasi’sÂ efforts to explain that according to their Rastafari religionÂ her sonÂ could not cut his hair and asked for her banking details to give her a refund.

PONTSHO PILANE found out what sort ofÂ experiences people with natural hair have had at school. Noncedo Zondi, 20, Johannesburg
We were not allowed to have hair extensions or weaves because they were unnatural. Learners tended to take things a bit too far; they would have really big hair and sometimes colourful hair. The school did not like that, so we were only allowed natural hair. So I had natural hair, but I had difficulties with my afro because it was big. I was told I could not comb out my afro because it was â€œexoticâ€. I was told about three or four times that my hair is exotic and I must tie it up; they would even give me a comb to comb and tie it up. I always thought it was unfair because the white girls had hair all over their faces, but because it was straight it was allowed. The problem is that people do not understand black peopleâ€™s natural hair and they donâ€™t understand what it takes for a black girlâ€™s hair to meet their standards. Elvis Munatswa, Zimbabwe
The only regulations we had for our hair at the school I went to in Zimbabwe was that it must be neat. They didnâ€™t care whether it was natural or relaxed hair, as long as it looked presentable. I think the last thing schools should be concerned with is hair. They should prioritise education over everything. Hair choices are personal, it is self-regulated but because school is a controlled environment, they have to have boundaries. Also, some people are just messy and lack personal hygiene, it isnâ€™t hair-specific but hair is affected. *Kelly Nkosi, 17, Johannesburg
What they did to that girl was purely racist. Just because we have black hair and we have braids, it does not mean that we are dirty. However, as a scholar myself, I think there must be some regulations on hair. A scholar must look like a scholar, so there should not be any funky hairstyles allowed in schools. I think there is a double standard when it comes to black and white schoolgirlsâ€™ hair, which is what makes this whole situation unfair. We live in a democracy and the same rules must apply to all learners despite their race. I go to a multi-racial school but the majority areÂ black people.Â The non-black people in our school have adapted to black hair and its hairstyles. But in predominantly white schools, I donâ€™t think they are aware of how black hair works. Anele Nzimande, 21, Johannesburg
In high school, my hair was slicked back into a ponytail. I conformed because that was what was expected of someone like me. Someone who did well in school and was raised to be polite did not question the school’s code of conduct because it was out of character, we [obeyed]. I had a straightener and would wake up early to make time to straighten [my hair] so it would be “neat” and pretty. Having grown up with straight hair most of my life because I went to schools with a code of conduct that forbid afros, my relationship with my hair is [now] one of acceptance and love. Thobile Mhlanga, 18, Empangeni
I was in high school last year, and we were only allowed to cut our hair. We were not allowed to grow our hair out. It was a very strict school. Nobody ever question why we had this rule. I supposed we were all fine with it because we all [came to] the school like that. I think this was the schoolâ€™s way of teaching us to follow instructions. It was kind of unfair because we were the only school that had such stringent rules. There was no need for such [rules], because it does not make a difference what hair a learner may have.

* Not her real name