Home Opinion Why I photographed these two cleaners at the foot of UCTâ€™s Rhodes...
WhatsApp
Facebook
Twitter
Email
Print 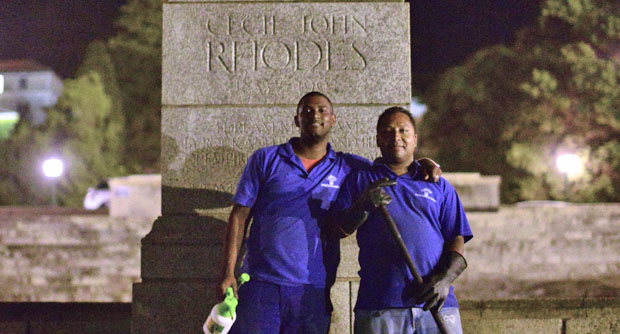 This is a photograph of the two men who worked until 10.00pm on Monday night to clean the statue of Cecil John Rhodes on the University of Cape Townâ€™s (UCT) upper campus, after a group of protestors had dumped two septic tanks of sewage on the statue earlier that day.

The demonstrators were protesting against the presence of infrastructure on campus memorialising colonial figures, including this statue. I took this picture to post on a photography page that I run, called UCT Pictorial, where I photograph people who are on campus, and try to share their experiences at UCT. So far, 12,000 people have seen the image.

My intention in posting this picture was not to condemn or dismiss the protest, but rather to remind us of the complex nature of demonstration and the many people involved in and affected by actions taken in the name of activism. These two men are as muchÂ a part of the demonstration as the other actors. The way that it affected and involved them was worth sharing and taking into account when considering the issues at hand.

Cecil John Rhodesâ€™ legacy is one that is difficult to reconcile with the values of a modern and transformative South Africa. Rhodes was an integral participant in southern African and British imperialism, and in many ways is the archetypal colonialist. Many of his policies and business ventures gave little consideration to the interests and livelihood of black South Africans, and caused oppression, suffering and displacement. Yet the presence of memorials such as this statue continue to commemorate him as a noble and valuable figure in our nationâ€™s development. Is this appropriate?

UCT is widely considered to be the leading academic institution on the continent. The universityâ€™s transformation strategic plan mandates that it work to make the university more more representative, intellectually diverse, and focused on African perspectives. Surely having a statue honouring a man like Rhodes, at the foot of the campusâ€™ great steps is at odds with these aspirations?Â Should we be challenging the way in which his legacy is remembered and honoured? I think so.

But the question this photo raises is how can it be done in a manner that is effective, yet respectful to all on campus â€“ such as the men in this photograph â€“ given the lack of change that has come from less radical forms of protest? Where do we go from here?

I posted this photograph with the hope that it would shift the perception of students who are ignorant or dismissive of this contentious and important issue. It is my hope that this contribution might spark their curiosity to learn about the history of colonial figures such as Rhodes, from a perspective outside of the narrow, traditional, white narrative, and consider how these memorials might make our public spaces unwelcoming. Hopefully this photo can contribute to the greater discussion and not be used to try to shut it down.

Nick Fitzhenry is an undergrad student at UCT specialising in economics and law. When he is not studying, he roams the campus with his camera, meeting and photographing the people who make up this diverse community. Follow the blog on Facebook or on Twitter.