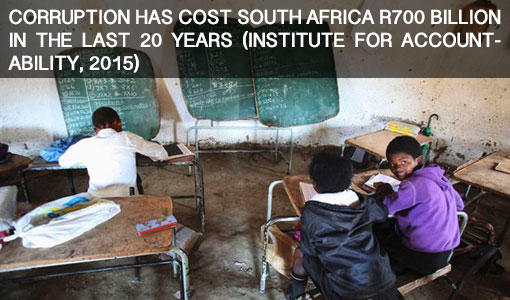 Sometime on Tuesday, much-loved political analyst Ebrahim Fakir threw a curve ball at the purportedly massive anti-corruption march scheduled to take place in Pretoria and Cape Town on Wednesday when he said: “Ag, no, I’m not coming”. The DAILY VOX explores the ruckus his comments caused (and the difficult questions he raises, Damn you Fakir!)

In a short status slapped together on Facebook, Fakir, writing in his personal capacity said he “wouldn’t attend a marchÂ led by people who are themselves, alleged to be corrupt”.

The anti-corruption march, touted as the biggest drive ever against corruption in the country, is being organized by a broad-based coalition of organisations and individuals under the banner calledÂ United Against Corruption. UAC says that hundreds of thousands of people are likely to turn out and show their support.Â More than 350 organizations have backed the drive.

While debates have raged over the utility of a march against corruption, Fakir’s post refers to something completely different. There are allegations of corruption leveled against one of the key organizers of the march, former Cosatu General Secretary, Zwelinzima Vavi.

You can read about the cases against him: here, here or here. Vavi, for his part, has said the charges are politically motivated, and being used to silence him.

But it turns out Fakir is not the lone voice in this regard. Â Zwanele Lwana from the Black First Land First (BLF), described the march as politically and morally bankrupt in theÂ Â Sunday IndependentÂ .

“BLF notes that this â€œantiâ€-corruption march is to be led by three former leaders of the ANC alliance â€“ [Zwelinzima] Vavi, [Irvin] Jim and [Julius] Malema, who all benefited in varying degrees from the corrupt ANC government they have been advising the poor to vote for, before falling out of favour with President Zuma post-Mangaung.Â This so-called anti-corruption march is little more than an unholy alliance of tainted and disgruntled individuals intent on settling political scores. The march is steered by personal vindictiveness, rather than principle or public good.”

What ever happened to good ‘ol fashioned good guys versus bad guys. Why you gotta make it so hard? Damn you, Fakir! While many reacted positively to Fakir’s assertions that the anti-corruption march was, um, most likely, um, corrupt, there were others who took him on. And how. And then a certain chap named Christopher Mouy Routledge (seems like a lovely guy) popped out of the skies and asked Fakir the most important question of them all: “What the hell are we supposed to do to challenge corruption then? Shall we wait for Jesus?” Or in his own words: “Besides your emotional and personal beef with the leadership of the march, what would you suggest is the substantive reasons underpinning your opinion and what exactly would you suggest as an alternative to active citizenry?” To which he was told: Â “Because corruption and unethical behaviour is an action and attitude – leaders who by their action show a disdain for the predictability, consistency and equality of adjudication and sanction required for rule bound behaviour to entrench itself, show both an attitudinal as well as actionable disdain for it. THIS rule bound behaviour is a key anti corruption attribute. This is why a leaders behaviour matters. One the leaders has demonstrated an active evasion and avoidance, exactly like the current Pres, to subject themselves to the rules […] The ridicule of a person who refuses to be accountable, leading an anti corruption/ for accountability march.”

Fakir makes it clear that this comments were not a call to stay away from the march.

But nevertheless, the points raised leads us to ask:Â Corruption is such a serious issue in South Africa. Are these jokers hoping to settle political scores or are they looking to fix the problem? And this corruption thing: can it ever be solved? Let us know what you think.

Editor’s Note: If you are at the march today, whatsapp us your comments, videos and pictures: +27764305905 or Tweet us: @thedailyvox