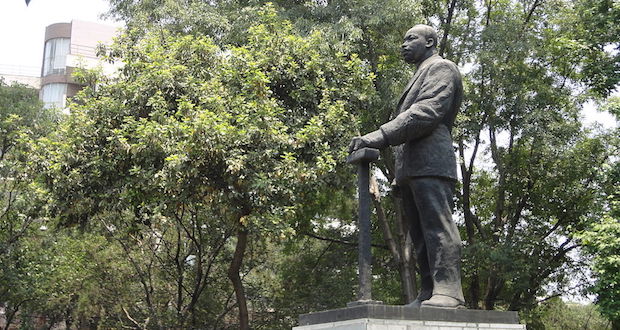 Transformation is on everyone’s lips. In what started out as seemingly benign poo on a statue, has turned into a nationwide movement of self-introspection over colonial symbols and ideas long passed.

The move to remove the Cecil John Rhodes statue at UCT has moved on to UKZN, where there’s now talk about the King George V statue outside the Memorial Tower Building at Howard College. At Wits University, debates on transformation have been reenergised by the activities of students in Cape Town.

Of course, this is a debate, and not everyone is happy about the action taken by students over a statue they see as little more than stone and steel. The criticism has come in heavy and hard: the Rhodes Must Fall movement at UCT has been called misguided, opportunistic and immature. But is it really?

The Daily Vox stumbled across a letter written on 16 April 1963 by civil rights leader Martin Luther King, Jr (MLK) from a prison in Birmingham in the United States. At the time, the city was among the most racially divided in the US.

Looking at his letter, in which MLK outlines the need to protest, and act against injustice in Birmingham, we can reasonably assume that not only would MLK have supported the removal of the Rhodes statue, he might have been there himself.

Here are five points that resonate with the Rhodes Must Fall movement. 1. On deciding to act on the Rhodes statue as a symbol of oppression, imperialism and injustice. And doing so, with gusto.

“In any non-violent campaign there are four basic steps: collection of the facts to determine whether injustices exist; negotiation; self-purification; and direct action.” “I have almost reached the regrettable conclusion that the Negro’s stumbling block in his stride toward freedom is not the White Citizen’s Councilor or the Ku Klux Klanner, but the white moderate, who is more devoted to “order” than to justice; who prefers a negative peace which is the absence of tension to a positive peace which is the presence of justice; who constantly says: I agree with you in the goal you seek, but I cannot agree with your methods of direct action who paternalistically believes he can set the timetable for another man’s freedom.” “You speak of our activity in Birmingham as extreme. I stand in the middle of two opposing forces in the Negro community. One is a force of complacency made up in part of Negroes who, as a result of long years of oppression, are so drained of self-respect and a sense of somebodiness’ that they have adjusted to segregation; and in part of a few middle-class Negroes who, because of a degree of academic and economic security and because in some ways they profit from segregation, have become insensitive to the problems of the masses.” “Nonviolent direct action seeks to create such a crisis and foster such a tension that a community which has constantly refused to negotiate is forced to confront the issue. It seeks to dramatise the issue that it can no longer be ignored.” 5. On why it must happen, now, without delay

“We know through painful experience that freedom is never voluntarily given by the oppressor; it must be demanded by the oppressed. Frankly, I have yet to engage in a direct-action campaign that was well timed in the view of those who have not suffered unduly from the disease of segregation. For years now I have had the word Wait! It rings in the ear of every Negro piercing familiarity. This Wait! has almost always meant Never. We must come to see, with one of our distinguished jurists, that justice too long delayed is justice denied.