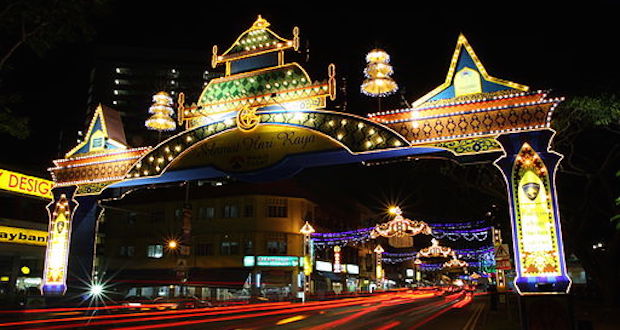 As if making fun of the way Muslims dress, pray, treat their women, and run their little kingdoms werenâ€™t enough, there is now an increasing attention paid to Muslim gastronomical practices. ABU Oâ€™WELL takes a look at the festival of Eid.

Every year, Muslims mark the end of the holy month of Ramadaan with the festival of Eid. After fasting for 29 or 30 days (depending on the sighting of the moon and other fairytales), Muslims embark on a grand feast on the day of Eid. The young visit the old and the sick and receive their gifts; quarrelling families put aside their guns and embrace each other. Some visit those who have passed on, and plant fresh flowers and sprinkle petals at their tombstones. Several also go on to enjoy a really good meal, with many people eating more than the norm.Â Western imperialist media has often criticised Muslims for binge-eating on Eid and warned of the ill-effects of eating well on the day. ButÂ theyâ€™ve got it all wrong â€“ over-eating is exactly what the doctor ordered. Hereâ€™s why:

1. Overeating as self-restraint
Since Eid marks the end of the fasting month, in which practicing Muslims would have avoided food and all things evil from dawn to dusk, many Muslims definitely tend to eat extra on the day of Eid. This is only natural. Itâ€™s called reaping the benefits of self-restraint. After avoiding food like the plague during daylight hours for almost a month, we can hardly expect Muslims to exercise any form of self restraint when faced with a feast. â€‹
2. Overeating as comfort food
While fasting and abstaining may be daunting to some, Muslims generally love the holy month of Ramadaan. They enjoy the sacrifice. Many even end up crying when the month comes to an end. (No, seriously.) For many Muslims, Ramadaan is a chance to detox, to focus, to live for a higher power. When the month ends, many begin to feel empty inside and may fall into a deep depression. Cue the comfort eating. 3. Overeating for health reasons
After not eating regularly for so many days, some doctors recommend diving back into meals, even binging. The argument goes as follows: the body goes into storage mode during the month of fasting, and suddenly eating a lot of food on Eid Day shocks the system into reality. One doctor went so far as to describe it as â€œbombing a siloâ€ and to â€œignore the breathing problems, even if it feels like a heart attackâ€. 4. Overeating to save the environment and restrict waste
The holy month is about sacrifice, moderation and God consciousness. There are more than a billion Muslims on the planet today and because of the strict adherence to the ideals of the month, a lot of food and money is saved during the 30 days. Many Muslims are very mindful though, and prudent about food purchases when they are fasting. They try to keep waste to a minimum. Many then eat all leftovers collected during the month on Eid itself, because they don’t want the food to go into the bin. â€‹
5. Overeating to combat Islamophobia
Muslims feel their faith is under attack every day, and that the Western world is desperately trying to water down their beliefs and traditions. So at a great expense to themselves, many Muslims â€“ be it in the Arab world, South Asia, or even in the UK, USAand South Africa â€“ have taken it upon themselves to commercialise Eid. The closer Eid resembles Christmas, or Thanksgiving, or any other public holiday, the safer Muslims feel. The feasting, the extravagant dressing and gifts, even the expensive celebrations are not real. Itâ€™s a sacrifice. Muslims want to show they are not radical; that they might believe in God, but they are just as shallow and materialistic as everyone else. â€‹Abu Oâ€™Well is a satirist and an inciteful contributor to The Daily Vox. Sometimes he is teasing; sometimes heâ€™s not.