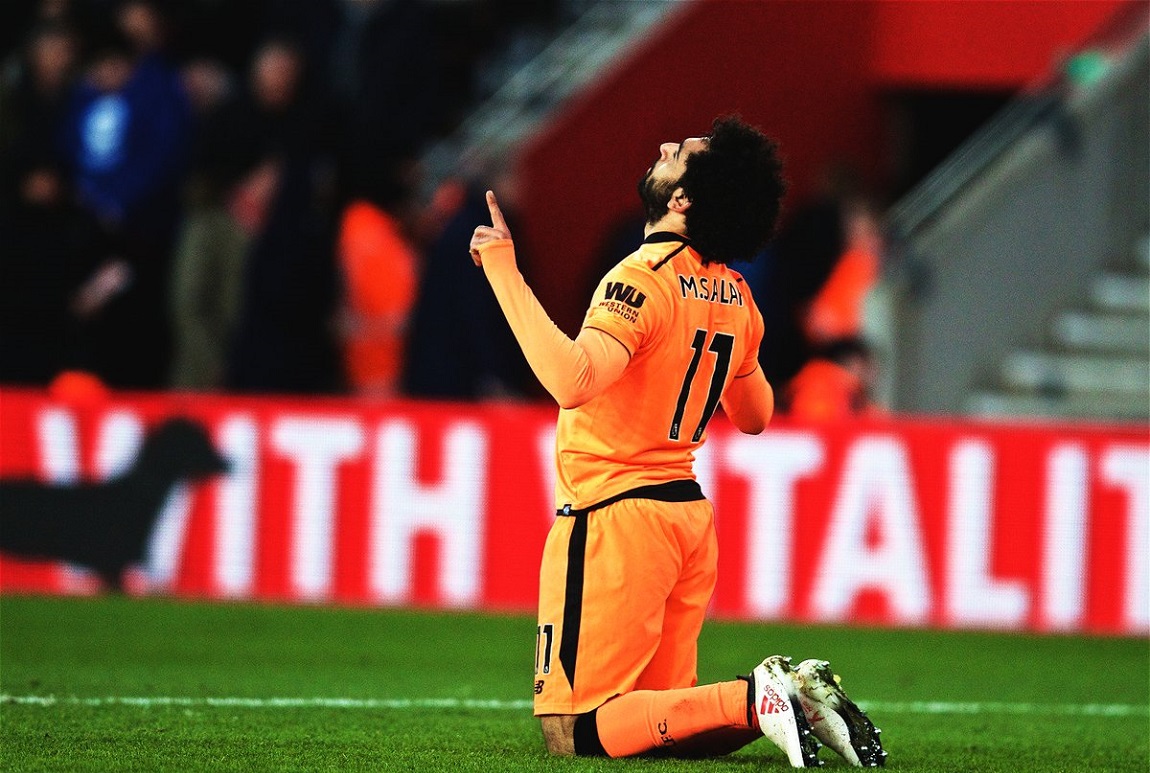 The new Mo Salah chant from Liverpool fans has been taking the world by storm. Liverpool’s number 11, Mohamed Salah has been leading the goalscoring for Premier League side Liverpool Football Club, to the delight of Reds fans all around the world.

In honour of the goals Salah has been racking for the team, Liverpool fans have composed a new chant for the player which goes:

The chant which Liverpool fans debuted during the Champions League game vs Porto has gone viral with the catchy tune being lauded by many as a sign of fans celebrating the Liverpool forward and his faith. Salah, the Egyptian-born player who transferred to the Merseyside club last June, is a follower of the Islamic faith.

The player has even seemingly acknowledged the song, replying to a tweet of the video of the chant with heart eye emojis.

Many of the narratives surroundings the new Salah chant have quoted the statistics showing how racist English fans of a fairer complexion can be to black and brown players. However, the analysis then veers off into saying that fans have changed their tune and with their embracing of Salah, it shows a positive response to the player, his religion, and a change in perception.

And it is this narrative surrounding the chant that makes me uncomfortable. The possibility of one football chant, sung by one group of football fans eradicating an entire culture of racism, anti-Semitism, homophobia, nationalism, and Islamophobia just seems far-fetched. The Salah chant might show that great strides are being made in changing how British fans react to players who are not “English”. In this case in particular Liverpool fans. However, what exactly being English in 2018 means is anyone’s guess because it certainly does not refer to white people only.

The Football Against Racism in Europe (FARE) Network, a nonprofit which studies discrimination in football, analysed thousands of matches during the 2015-2016 and 2016-2017 seasons. FARE recorded over 500 incidents of racist, anti-Semitic, homophobic, nationalist, and Islamophobic nature. While the study was done on a worldwide stage, British fans were found to be the worst with 59 recorded incidences.

Kick It Out, an organisation that looks at discrimination in football found that in 2018 alone, there has been a 38% increase in discrimination which includes racist and homophobic behaviour in the Premier League.

Fans started singing the song because of the results that Salah was producing for the team week in and week out. And that’s usually how it works: players get songs from fans when they are performing well. But what response are we to expect if Salah does not perform. This is not to say anything about Liverpool fans in particular but English football fans in general. The tide can turn very fast when players do not perform on the pitch. And those once very positive songs can very easily turn ugly.

Many Muslims fans and commentators have also said this is a good opportunity for people to find out more about Islam and the faith as a whole. However, as someone who follows the Islamic faith, the idea that converting to the faith will come about because of someone scoring goals does not make sense. Becoming a Muslim and following the faith is a lot more complex and nuanced than one man scoring goals. Joking that Salah scoring goals are what is going to make you a Muslim and go to mosque feels like a trivialisation of the experience of Muslims living in Britain who face a great deal of racism and Islamophobia. Simple things like going to the mosque to pray can be a dangerous activity for Muslims. This might be reading too much into the issue but perhaps truly celebrating Salah would mean people actually going and finding out about his culture and religion instead of relying on tropes and stereotypes. Fans have also sung about Salah being the King of the pyramids. And hopefully, that will be the outcome of this chant: football fans and people, in general, educating themselves about people who might not look like them but make up an integral part of their society.

It is understandable that people are stanning this new chant. The impact of the chant cannot be underestimated. However, as with most things that become popular, we can’t also overestimate the significance of the chant. It’s a catchy song that’s probably going to be sung a lot in the next couple of weeks and months as Liverpool (hopefully) maintains the momentum they have going. It’s not going to solve Islamophobia and racism in the Premier League and in English football. We could hope, but honestly, I’m not holding my breath.