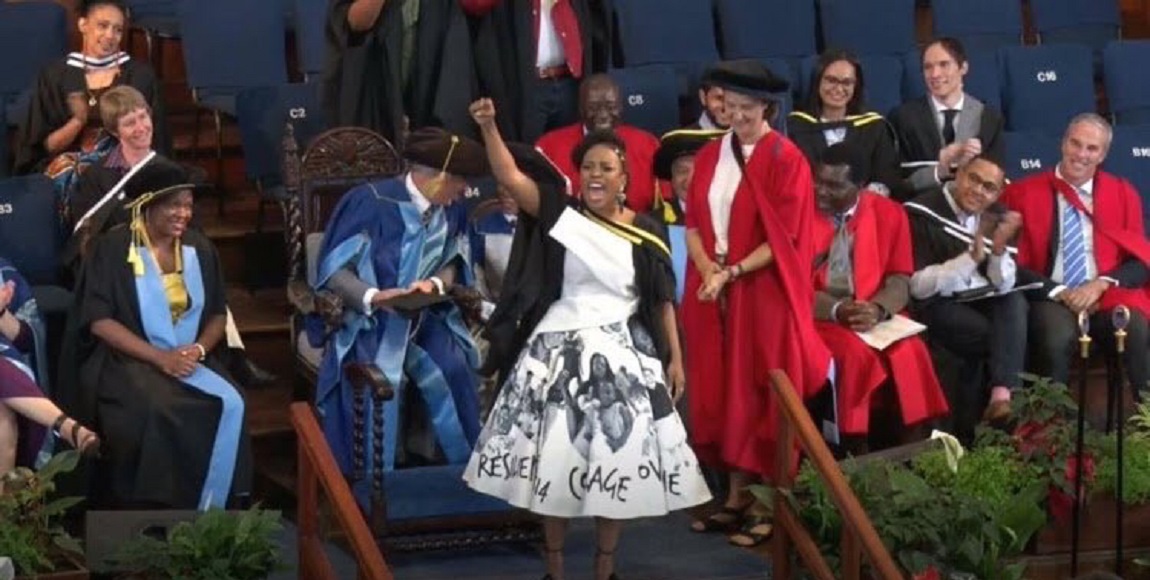 You might know Nomzamo Mbatha as the actor who won the Africa Movie Academy Award for Best Actress for her role as Moratiwa in Tell Me Sweet Something in 2015. Perhaps you know her as a social media queen or as a fashion slayer, model. But she is stan-worthy for a whole lot more than that, says SHAAZIA EBRAHIM and FATIMA MOOSA.

Mbatha continued on her slay quest when she graduated with a BCom accounting degree from the University of Cape Town this week. We can all agree that there’s little more exhilirating than seeing black women graduate but Mbatha’s graduation especially gave us all of the feels from her #GraduationGlamRoom to her dress and tribute to Mam’ Winnie.

As expected, Mbatha looked gorgeous. The white one-shoulder dress was not only spectacular to behold but it was particularly symbolic. It had prints of faces on it which Mbatha explained were the people in her life that had passed on, including her late sisters and father. Her sister Carla committed suicide in 2014. It also had the words ‘courage’, ‘resilience’ and ‘overcome’, and the number for the helpline to the South African Depression & Anxiety Group (SADAG) because as she said mental illness and suicide is real and prevalent among university students. In an Instagram post she said that like many South African students, she had dropped out of university for financial reasons amongst other things. But she came back and finished her degree despite her hurdles – and nothing could be more heartwarming.

Today is the Third. Carla died on the Third.
My dress has the pictures of those I have buried, those who held my heart.
To Courage.
To Resilience.
Overcome. #UCTGrad2018 pic.twitter.com/hKICAKSUyk

I didnâ€™t know this was the story behind the dress. ðŸ˜­â™¥ï¸ pic.twitter.com/EuhczbwnLC

When Mbatha walked to the stage to collect her degree, the graduation hall erupted in cheers. Before she walked off, Mbatha she paid tribute to fallen struggle hero Winnie Madikizela-Mandela who passed on Monday with her fist raised and a resounding call of “Amandla!”

If that’s not enough for you, Mbatha also spread the love to her fellow classmates who graduated on the day and set up a #GraduationGlamRoom where graduating students could get their makeup done courtesy of her and Ground Zero Productions.

We know there are many, many reasons to love Mbatha but did you see what a flame she is as the April covergirl for Glamour Magazine. Not only does she look like a goddess on the cover but her interview includes her speaking about the women in her life who have influenced her life and where she is today.

Glamour Magazine Cover Girl … special edition #MADEinSA !!! Got to speak about the 8 women who have influenced my life and who I am today. Grab a copy and find out WHO! ðŸ’›ðŸŒ¸

Mbatha is truly life goals. She is a United Nations (UN) Goodwill Ambassador. And as part of her work with the United Nations, Mbatha supports the LuQuLuQu campaign which aims to get ordinary people to support and find solutions for refugees. She met with refugees in Kenya where she was able to hear the stories of refugee athletes.

According to the department of international relations and cooperation, refugees and displaced people are close to her heart and she has always had a desire to lend her voice to the cause.

According to Mbatha, her top three career highlights so far have been presenting on stage at the BET Awards, her brand ambassadorship with Neutrogena, and her work with the United Nations High Commission which she says “allows me to stand tall for others.”

Mbatha has also said that the entertainment industry really needs more female support and women rooting for each other. Yaas girl!

She is the brand ambassador for many things amongst those Mbatha is an ambassador for Puma. For this year’s International Woman’s Day, as part of her Passion Project, Mbatha was a part of the #DoYou campaign. This is a Puma campaign which encourages women to have the confidence to focus on their strengths and make their world their own.

As part of her contribution to the project, Mbatha called on young women to post videos about the impact role models and mentors had on their individuals journeys. The young women were given the chance to spend the day with Mbatha.

As seen from her graduation, Mbatha is an outspoken advocate for mental health. Last year, she was a part of a documentary series with Rihanna and Cara Delevingne which called on Puma ambassadors to use their platforms for a good cause. Mbatha chose to dedicate hers to breaking stereotypes around mental illness during The Lighthouse Foundation.

Speaking about her work, Mbatha said “It is not for entertainment value and never for gaining public favour. It’s about taking time out to fully understand what you’re committing to champion so that you advocate for it with a greater understanding and sensitivity. It’s the very thing I hope to impart to others.”

Mbatha is also all about black women empowerment. Speaking to OkayAfrica, she said it is important for black women to cease being polite.

What a queen, congratulations Nomzamo!