Home Features Why the drought in the Kruger Park is a not a bad...
WhatsApp
Facebook
Twitter
Email
Print 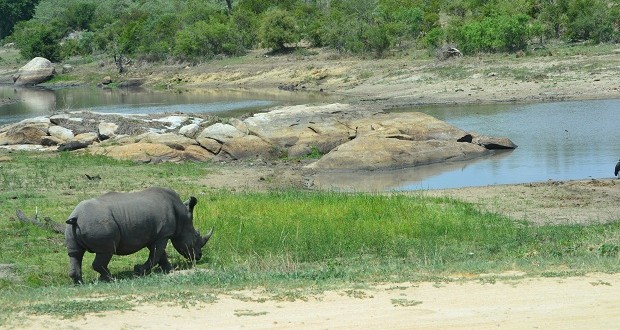 El NiÃ±o has had a major impact on South Africaâ€™s agriculture and water supply, with the Kruger National Park being no exception. However, park management isnâ€™t doing a lot to protect animals from the lowering water levels. DANA DA SILVA looks at why National park authorities arenâ€™t putting through an emergency call to Operation Hydrate just yet.

In the Kruger National Park, the drought has drastically lowered the water levels of its five continuously flowing rivers, Crocodile, Olifants, Sabie, Luvuvhu and Letaba. Deep pools have formed in sections of the Sabie river, with hippos huddling together as the water levels continue to drop. All the seasonal rivers are dry and so haveÂ the dams.

If it does not rain soon then the lack of food will cause most herbivores to starve or become weak, becoming easy prey for predators. Predators such as lions and scavengers like vultures will have more food and breed more. Browsers like the kudu, who eat leaves, will have a hard time as their food source will dry out first. Elephants and zebras are naturally drought-resistant, so they wonâ€™t suffer much. Mass wildlife death hasnâ€™t happened yet, but when it does it will be the old and diseased animals that will die out leaving behind the stronger ones. But is this a bad thing? According to Isaac Phaahla, Media Specialist of the Kruger Park, â€œdrought in the protected areas is a natural phenomenon that occurs to rectify some of the ecological damage. It is seen as nature healing itself.â€

It may seem cruel, but Phaahla said that this needs to be seen in context. â€œDrought in protected areas like Kruger National Park is seen as nature balancing itself out, hence the strong species will be able to survive and the weak ones will naturally die or be predatored.â€

This doesnâ€™t mean that park management is sitting around doing nothing about it. The park has been preparing for the current drought since 2015.

â€œNature has always been able to take care of itself but the Kruger National Park Management has plans that will be implemented as and when needed,â€ Phaahla said. These plans include building dams, some of which are already being built and more if management sees fit.

Drought is no stranger to the park. SANParks’ head of scientific services, Dr Stefanie Freitag-Ronaldson, told the 50/50 TV series that droughts typically occur in intervals of about 10 to 15 years and have an important place in the natural cycle.

Tourists also wouldnâ€™t need to worry as the park has boreholes and permanently enforces water restrictions. â€œWe do provide water for guests and neighbouring communities through their municipalities as we are part of those communities,â€ said Phaahla.