Home Youth Voices of the Youth With such uncertainty and mistrust in our leadership and political parties, where...
WhatsApp
Facebook
Twitter
Email
Print 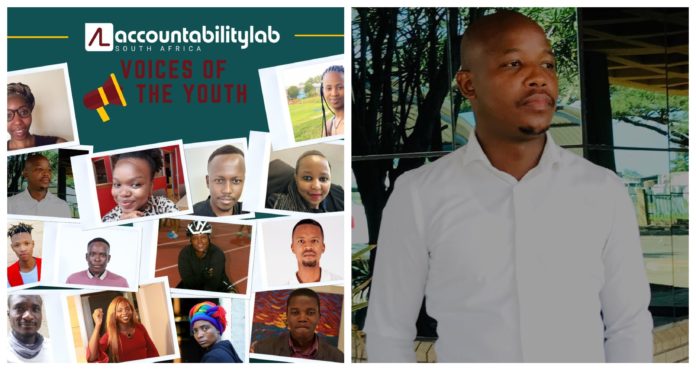 For far too long now, the South African youth has been reduced to little more than spectators. In a country which, close to three decades ago, was hailed by world commentators as a wonderchild of the  20th century – the Rainbow Nation born on the edge of a civil war. It was a country that held promise for, in the main, the so-called Born Frees. However, as the statistics of joblessness, inequality and poverty continue to show day by day,  nothing could be further from the truth. Young people live hand-to-mouth with an increasing inequality gap where their best shot at life is  hoping that, through political connectedness, they might one day score a tender and get to emulate their leaders. Policy makers who do not consult those most likely to  be affected by their parliamentary edicts. By Mbuso Kunene, Durban University of Technology; Journalism alumnus

It is a South Africa that is a far cry from what the millions of Black South Africans could have  hoped for when they formed snaking queues to vote for the first time in their lives in 1994. Its leadership is self-centred, greedy, shows little to no consideration for the poor and working  class and, worst of all, petulantly unrepentant about its actions.

The recent civil unrest in KwaZulu-Natal and Gauteng which cost the country billions and left  hundreds dead is a true reflection of what many have termed a time ticking bomb. Two critical  provinces of the country were brought to a standstill, major national roads vital to the economy  of the country halted and infrastructure raised to the ground. The State Intelligence apparatus  was caught flat footed. Government security and political leadership were shown to be  rudderless.

This paints a clear picture about the kind of leadership we have. A leadership that only cares  to safeguard the elite. The poor and marginalised only have themselves to blame for allowing  shenanigans of non-accountability from the leadership to go this far. In South Africa, as civil  society we have made it a culture to always raise concerning issues and no actions thereafter.

Arrogance from the leadership is as a result of us, we are too understanding and more often  reactionary on issues that directly impact on our daily lives. As a young South African, I truly believe that keeping more people economically active could  be the best solution to prevent such situations as we saw in July 2021.  Young people need to be plugged into the economic and leadership pipeline. South African youth must be given an opportunity to hold ministerial positions, lead key state-owned enterprises and developments as we are the ones who experience and understand the issues faced  by ourselves and our peers. But today, according to Statistics South Africa, unemployment rose to a new record high  of 32.6% in the first quarter of 2021. Research further reveals that South Africa is one of the most youthful countries in the world,  however approximately 3.3 million of 10.2 million young people aged 15-24 are without jobs in South Africa.

What are some of the things the government should prioritise and implement?

For a country to grow and prosper, it is always important to support local businesses. In South  Africa, a small to medium black business is likely to close its doors after three years of operation.  This is precisely based on two factors viz. a lack of professional business coaching and a lack  of access to capital. Recently, one study reported that South Africa imports more ready to sell  potato chips than it uses locally produced potatoes to make them. This simply means our policy makers support more  international companies that produce products which can be farmed locally.

To better improve local business, the government must prioritise funding more youth-owned businesses, and  in particular those which continue to be marginalised by the banks and financial institutions  rules and policies. A state bank with a mandate to assist and fund young entrepreneurs and farmers  is of pivotal importance should we want to see a prosperous South Africa for all.

Only through such far reaching interventions do we stand any hope whatsoever of preventing  an Arab Spring in the future like we saw arise in countries like Tunisia and Egypt a decade ago. The youth  are hungry, and growing increasingly impatient.