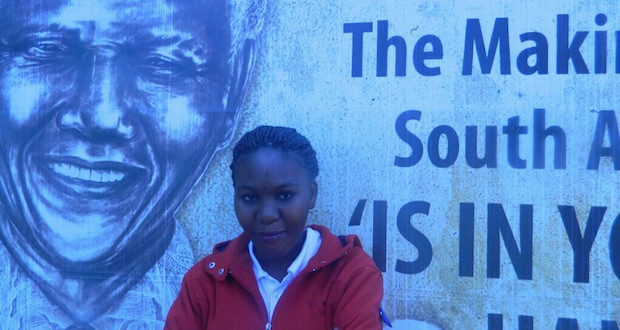 Sindisiwe Khuzwayo dropped out of school after she got pregnant and has been trying to get back into the job market ever since â€“ but the cards are stacked against her.

Having no matric is disadvantage for most of us. Harambee Group made me realise that in order to make something out of my life I need to go back to school and complete my studies.

I fell pregnant while I was in grade 11. I never went back to school after I had the baby. Although I wanted to it wasnâ€™t easy, because I had responsibilities at home. So I had to find piece jobs in order to make do. Since then finding a proper job hasnâ€™t been easy. Most employers are looking for people with matric or a relevant qualification.

I came to a jobseekers event here in Chatsworth hoping for a job opportunity. I had seen an advertisement on a local newspaper about Harambe, a group that helps young, unemployed jobseekers. The advertisement was quite specific â€“ theyâ€™re looking for people with a matric certificate or a qualification. But I thought Iâ€™d take my chances.

Although my educational history isnâ€™t good, Iâ€™ve had a chance to work in a restaurant. The job wasnâ€™t that hard but dealing with customers was quite challenging at times. And once people knew that I didnâ€™t have matric, any silly mistake would count against me, even if my education had nothing to do with it.

Being young and without proper education is hard.Â You find yourself having to humble yourself before rude people because of their status. Nobody really cares about how you feel or understand what you are going through. Yes, Iâ€™m in this situation because of some of the choices I made, which deprived me of the chance to get a good education. But people shouldnâ€™t treat me badly because of it, and I shouldnâ€™t still have to beat myself up over it.

Learning that there are people and organisations, like Harambe, that are still trying to help young people has encouraged me to want to go back to school. I know that there is still hope for me and other unemployed people to find jobs.

My ideal job would be working in a pharmacy as an assistant. I love working with people and medication, peopleâ€™s health is all that matters to me.

I think itâ€™s possible, if I can go back to school and finish matric. That’s what I want to do next year.

The thought of going back to school after years is disconcerting. I wouldnâ€™t know what to expect and an environment with kids who are younger than me will be difficult to adjust to. Coping with the subjects will also be a challenge but itâ€™s a chance that Iâ€™m willing to take because I would like to succeed in life. I owe it to myself.

– As told to Lizeka Maduna