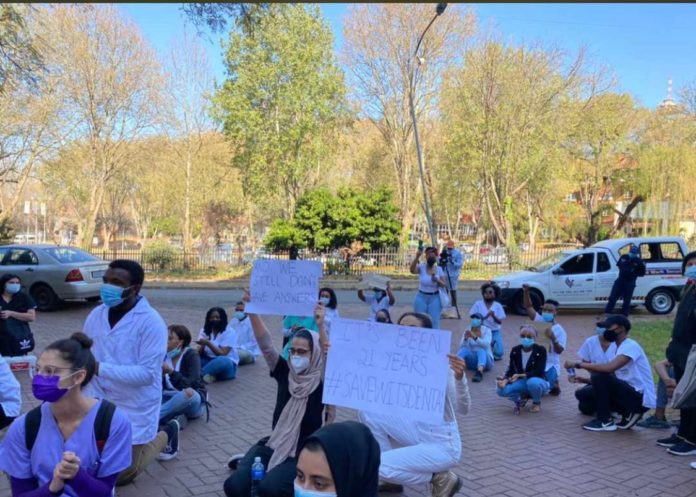 Students from the University of Witwatersrand (Wits)’s dental school held a protest on campus on September 1. The students were protesting against a number of issues. These include questions about the spending of their tuition money and academic timelines.

Speaking to The Daily Vox, Daniel Nel, a second-year medical student and a founding member of the Health Science for Action group, said the protest was a last resort by the student body. He said it was to encourage faculty to engage with their recent demands and concerns. Nel said he was approached by Wits dental students to help in the advocacy for the crisis at the dental school.

Nel said there are no long-term strategic plans in place for the dental school. There was also nothing concrete to confirm their academic timelines. These are the questions students want answered as it affects their futures directly, he said.

He said on August 25, the dean of health sciences, Professor. Shabir Madhi had a public forum to address the concerns amongst the dental students. A week later there were still no answers, Nel said.

“One thing they promised was to get a breakdown of where the dental students’ tuition goes. They also assured us they would issue a letter to parents and bursars to explain the current situation. It shouldn’t take this  long,” said Nel.

Speaking to The Daily Vox, three senior dental students, who wished to remain anonymous, said the protest was a culmination of so many things. Among them being that the dental degree at Wits is so expensive but students don’t receive value for their money.

Since 2018, students have raised their concerns about the poor infrastructure at Charlotte Maxeke Johannesburg Academic Hospital (CMJAH) dental school facility. The labs and clinical training space are not safe, and the fire at CMJAH exacerbated it. “We have been in the dark since August about our academic timeline. We are hopeful that talks will take place to come up with solutions,” the students said.

“We got nothing in writing about partial accreditation, but were told this face to face. I am fearful that I may end up with a qualification that holds no ground anywhere,” one of the students said.

The students said they may not be able to practise. This will mean  that their education would have been a waste of many years. They said it is heart-breaking when they have wonderful and dedicated lecturers, but everything else is in shambles.

Some answers were reportedly given to students. It was confirmed that first and second year (pre-clinical) dental students now have a basic academic timeline. The clinical students timeline is still unclear, and they are waiting on a response, Nel said. “Students want to engage collaboratively with the faculty to find solutions together,” Nel said.

The Daily Vox has reached out to the dental school and Wits management for comment. The piece will be updated once it is received.