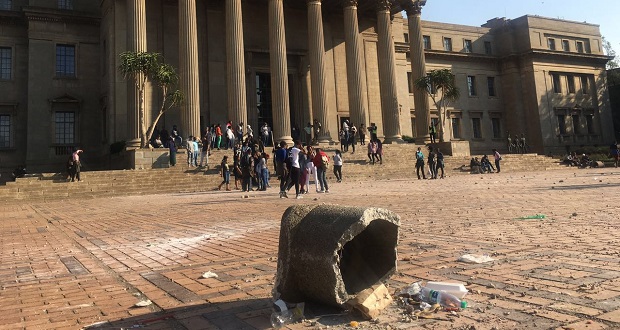 The general assembly at the University of Witwatersrand (Wits) Â scheduled for Friday morning has been postponed. According to Shirona Patel, spokesperson for the university, consensus has not been reached with student leaders, who say their demands are for all universities to be shut down until government commits to free education.

â€œThe students have once more shifted the goalposts,â€ Patel said.

Speaking at a press briefing, Wits Vice Chancellor Adam Habib said that mediation with students was unsuccessful, after students had agreed for the university to reopen on Monday.

â€œWhile the struggle for free education is a noble one, it cannot be at the cost of the academic programme,â€ Habib said.

We only had 1 demand from students for the General Assembly, for Wits to support FREE, QUALITY, DECOLONIZED EDUCATION FOR ALL. @AdHabb

Student leaders, however expressed shock and disappointment at the decision taken by university management.

Kaamil Alli, incoming Wits SRC deputy Secretary General accused the university was acting in bad faith. â€œThe line about SRC leaders agreeing to go back to class on Monday is a lie – our agreement was depending on the outcomes of the General Assembly, we’ll then talk about Monday and whether or not the academic programme continues,â€ he said.

â€œEssentially, one demand which is we want a commitment from the university with regards to free, decolonised education now,â€ she said. â€œObviously, the conditions are that the vice chancellor agrees to keep the school shut down until we have free decolonised education. At the same time, we need to have him as the vice chancellor and chairman of all the other vice chancellors in the country put out a call to other institutions to get the other vice chancellors to join him in the picket lines when they protest. Some of those demands are the ones that went out to students yesterday to consolidate, and we’re assuming they got a hold of those demands and thus are not engaging with us in good faith.â€

Speaking at the press briefing, Habib said there was also a fear for the safety of the university community.

â€œThe protesting students did not agree with the format of a general assembly and they wanted direct engagement from the floor. We would not be able to guarantee the safety of the students who were opposed,â€ Habib said.

According to Habib, a general assembly is meant to be a symbol of unity.

He said the assembly would be postponed until consensus with all stakeholders is reached.

A mass meeting with students to plan the way forward is scheduled for 11am on Friday.