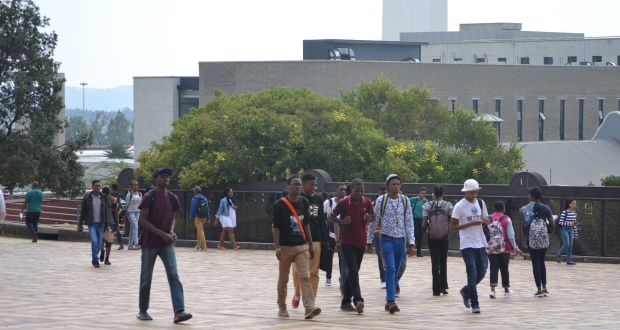 After unexpected protest action at the University of the Witwatersrand on Monday, workers and cleaners at the university were left uncertain about the broader nature of the movement and where it was headed. AAISHA DADI PATEL and GOOLAM SAYNEDS went to ask a few of them what they make of the student movement, going forward. Philip Mangla*, 36, cleaner, Johannesburg
I’m not really feeling safe here, especially since they brought all those private security. We have a right to protest, and we feel like our rights are taken away. Insourcing is not happening as fast as we thought it would, we thought we would have it by June. But the protest on Monday was not really safe here; it wasn’t like the ones we’re used to. Usually we protest with the students because they are helping us anyway, and we just make a noise and go around, but Monday’s was totally different – there was fighting between them, and it’s not okay to burn things. There were students from Mafikeng and Cape Town, I heard, and so that’s why we couldn’t trust them and follow them – they were not our people. I don’t think there was a political aspect to what happened on Monday, and it looks like they also even between themselves didn’t know what was going on. Onelela Jijana, 20, BA, Eastern Cape
Feminists and queers were excluded on Monday, and I was confused about what was happening. At first, they said it was a protest for 500 students that were financially excluded, and then it was feminist stuff, and then it just ended off there. I think Iâ€™m very confused because the SRC confirmed that nobody was deregistered and that they are working with the people at Education Campus to try and get them onto NSFAS so that they donâ€™t move from Wits. If the protest was for free education, then I donâ€™t think we can protest for free education so randomly, and so I donâ€™t think it was planned properly. And there was fighting about who should and who shouldnâ€™t lead. There was a fight between Sarah (from FMF) and Vuyani, and so I think it was very unorganised. If itâ€™s a protest for something so big I think it should be organised. On the movement and going forward, I donâ€™t see where itâ€™s going to because Iâ€™m not seeing any protest or any movement from FMF. From the SRC though theyâ€™re trying to bring Access, they tried to bring in student accommodation and what not, but Iâ€™m not seeing anything from FeesMustFall side. Matthew Cockroft, 19, BSc, Germiston
I personally wasnâ€™t affected that much you Mondayâ€™s events. We were kicked out of a lecture at one point and told to leave the venue. I canâ€™t say that I agree with the burning down of the lecture hall – it was completely wrong. When it comes to the movement, you have to look at background before university. You canâ€™t just expect to get into university if donâ€™t have a more basic form of education. So I think it should more start lower down before their tertiary education. I do feel fairly safe on campus, I’m a first year and when the protests started last year I more didn’t know what to expect than I was scared. But in my time on campus so far, I havenâ€™t really seen any forms of violence. Kgomotso Radebe*, 31, cleaner, Johannesburg
From my side, things are a lot better than they used to be. Now I get a top-up, and I’m taking home R4, 500 a month. I was here and joined the protest on Monday, but I didn’t know what was happening. We saw the students singing and we just joined in, just for a while, and then I went back to work. I don’t think it’s a good idea to burn things, like they did at Umthombo. You have to sit down and talk. And people having different political views is wrong. If you are in a struggle, you have to do one thing. No politics. No one cares about ANC or EFF differences. The students need to talk to us and say we’re doing 1, 2, 3. And here can’t be a movement without the women, that’s a problem too. If we are in a struggle, we are in one position and all fighting the same thing. That’s the only way the 11th floor [university management] can hear us. Marco Mons, 19, BSc, Kensington
I think I can agree with and understand where people who protest are coming from, but the idea of them preventing other people from learning means defeating the purpose. If they want everyone to have free education they shouldnâ€™t be stopping us from having education as well. I think that Wits are working to come toward some sort of solution. I know theyâ€™ve taken in a lot more students this year but I also think it’s quite difficult for them to make completely free education for everyone. They donâ€™t really seem violent – you feel like you might get stopped from going to a lecture, but you donâ€™t feel sort of threatened. I think the protests last year looked a lot more organised than whatâ€™s going on now at the moment. I know they had the SRC involved and that sort of thing which isnâ€™t really happening now, itâ€™s more random. Vuyo Hlatshwayo*, 19, physics student, Limpopo
We were supposed to write a physics lab on Monday, but couldnâ€™t write it because of safety concerns. I donâ€™t think Mondayâ€™s groupâ€™s protest was legal. They told us the SRC was not involved. And the other thing with SRC, is that SRC does things properly. For me, Mondayâ€™s group did things illegally. I am very disappointed with the way that they handled things on Monday and I see no reason for them to set the lecture theatre alight. That was uncalled for. From what I saw on Monday, most of the people were wearing EFF t-shirts. If they wanted to make a statement there was no need for them to disrupt classes. They should have found a way to send their message properly, not the way that they did. Ruby Mashaba*, 39, cleaner, Soweto
I am so disappointed about Monday’s protest which we thought was led by Wits FMF, but later found out it was patriarchal male chauvinists who don’t respect women! Who beat women! Who shut out women’s voices and made the decision to shut down Wits on their own! We feel robbed and we were put in danger of losing our jobs! Why? Because of some stupid males from other universities, who are also rapists, patriarchal, chauvinists, bullies, and woman abusers. I am so heartbroken and angry about this issue!