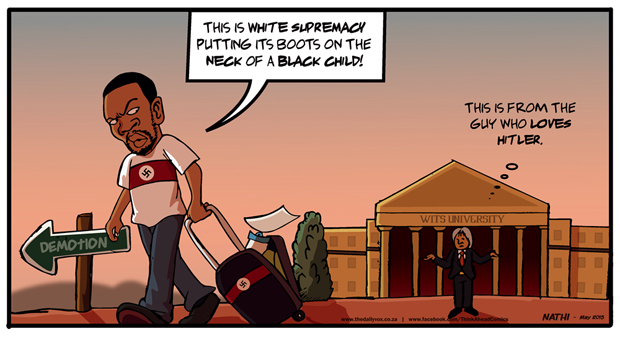 Then Wits SRC president Mcebo Dlamini was in the news last week for stating â€œI love Hitlerâ€ on Facebook, and saying that every white person has a little bit of Hitler in them.

On Monday Wits vice-chancellor Adam HabibÂ formerised the SRC president, announcing that Dlamini was removed from his position owing to a previous assault charge, for which he was found guilty by the universityâ€™s disciplinary committee.

While Habib was careful to note that the Hitler comments had nothing to do with Dlaminiâ€™s dismissal, he also said: â€œI would also like to make it categorically clear that I believe that these comments violate the fundamental values of Wits University and that Mr Dlamini has brought our institution into disrepute.â€ Â Habib has referred this matter to the Law Office for further investigation.

In an interview with Power FM, Dlamini called the decision to remove him as SRC president a joke and said that Habib did not have a case against him.

Stripped of his SRC duties, Dlamini will have some time on his hands. We suggest he use itÂ to catch up on his reading around Adolf Hitlerâ€™s attitude towards black people. Whoâ€™s a joke now?