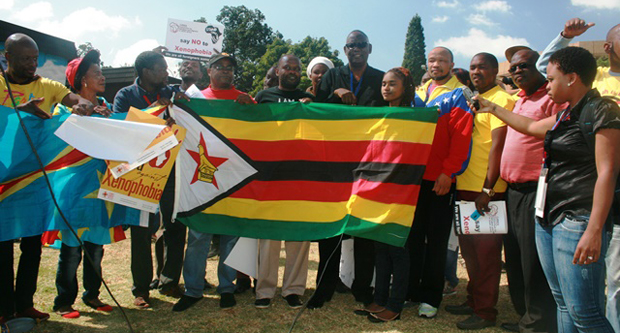 Earlier this monthÂ psychology PhD student ELVIS MUNATSWA, 26, became a victim of xenophobia. Four men in a taxi assaulted, robbed and deserted him in an unfamiliar area. He spoke to Pontsho PilaneÂ about his ordeal.

I usually leave campus at about 6 oâ€™clock. That Wednesday evening was no different. I use the Cresta taxis near the Total Garage in Braamfontein to get home. I got into the taxi that the queue marshall directed me to. The taxi was not full â€“ this was nothing new or strange. There were three other men in the taxi: one sitting in the front seat with the driver, the other sitting next to me in the seat behind the driver, and one other guy sitting behind me.

As I paid my taxi fare, I asked the driver if he was going to Cresta. He said yes. I spoke to him in English and he replied in English as well. Just after our brief conversation, my phone rang. It was a friend of mine and we spoke in Shona. When I was done with the call, the driver asked me if I am not South African and I told him I was from Zimbabwe. The man sitting behind me then said â€œMasâ€™bulale lenjaâ€ [Let us kill this dog].

This was the first moment I realised that something wasnâ€™t right.

I thought of jumping out of the taxi, but the driver locked the doors. The next moment, I could feel a gun at the back of my head. The man sitting next to me also had a gun. They started hitting and swearing at me and calling me a dog. We were not driving on the Cresta route anymore and I wasnâ€™t sure where we were. I thought I was going to die.

The guy behind me was the most violent â€“ he was so pissed off and I donâ€™t know why. He kept on saying I am worthless. He was hitting me on my right thigh â€“ he even came around to the seat I was in and kept hitting me.

They started searching me; they found my small phone and my wallet with only a R100 and two bank cards. They told me they are going to drive to an ATM where I would withdraw all my money and give it to them. They threatened to kill me if I tried to run away. We drove around to ATMs, but most of them had people around and the driver went past. Meanwhile, the two other guys were beating me up.

We ended up in a secluded area and they threw me out of the taxi. My right leg was painful and I could barely stand up. As I tried to limp over to the road sign in front of me, I saw the taxi reverse. Seconds later, I heard a loud sound and saw a bullet hit the sign. The taxi quickly sped away. I think the driver reversed so that the bullet didnâ€™t hit me.

A tow truck driver must have heard the gunshot and came to where I was. He didnâ€™t come out of his truck, but I explained to him what had happened. He gave me a lift and drove me to the Sophiatown police station.

I tried to open a case of robbery and assault, but I needed an assault report from a doctor to open a case. I spent 12 hours in the hospital to get that report and I eventually opened a case.

Iâ€™ve been living in South Africa since 2009 and Iâ€™ve never experienced xenophobia until that night. Braamfontein and Auckland Park are places I considered safe, as compared to Noord and Bree taxi ranks.

I donâ€™t think this was only xenophobia â€“ they tried to rob me and they stole my phone and laptop. Iâ€™ve been mugged before and that was just about taking my things, but this was indeed fuelled by xenophobia â€“ I was attacked because I am Zimbabwean.