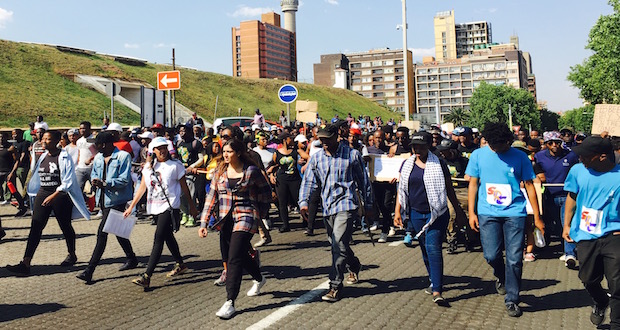 Despite arrests of student protest leaders countrywide, the Wits University SRC said that it will continue to fight for free education. The Daily Vox spoke to Wits student leader Shaeera Kalla about the way forward.

Shaeera Kalla is a familiar face at student protests, often seen with a keffiyeh around her neck and acting as the voice of reason to her comrades. The student leader can usually be found at the front of the marches, chanting and calling students to order, arms pumping the air with cries of â€œHigh morale!â€

On Tuesday morning, a flustered Kalla was standing outside the Johannesburg Magistrateâ€™s Court along with a small group of students from Wits and members of the press, who outnumbered the students, as they waited in the chilly wind for arrested student leader Mcebo Dlamini to appear in court. Dlamini has been charged with contravening a court interdict, theft and possession of dangerous weapons. The case has rattled student leaders who believe they are being targeted by government in a move to destabilise the movement.

Kalla showed signs of stress from the last four weeks of protesting. She told The Daily Vox that student leaders are afraid of being arrested but that they will press on with the protest for free, quality, decolonised education.

“We cannot hide like rats; then we might as well be languishing in prison. We need to be out there. If we are not here getting the movement to go forward, the university and government will get exactly what they want [to destabilise the movement],â€ she said.

â€œThere is no way we can retreat, we have come too far.â€

The student movement, both at Wits and across the country, has become more fragmented over the past week, as police have cracked down on protest actions. The students involved now appear to be on the back foot. Still, Kalla said, the movement is determined to reach a solution with government.

Kalla did not elaborate on how exactly students would force universities to march with them.

She said that although Wits management supported the fees issue in principle, it has failed to act and has killed the movement through intimidation.

Student leaders have taken issue with universityâ€™s decision to hand operational control of campus security over to police. They claim police have raided campus residences and that plainclothes private security guards and police have been following students both on and off campus.

Last night i was followed by the police to my place at around 10pm, #FMF students are being dealt with throughout the country #UJ #UJFMF

Kalla believes Dlaminiâ€™s arrest is an attempt by the state to delegitimise the movement. The charges of theft laid against him – of a security guardâ€™s riot shield and helmet – have no basis, she said.

Dlamini was denied bail on Wednesday morning and will remain in custody until his trial on 15 November.

#WITS @vuyanipambo says the denial of bail for #MceboDlamini is a tactic to send shockwaves through #FeesMustFall #Fees2017 pic.twitter.com/GbpANwBJA8

“We are extremely disheartened with the way our comrades have been kept in prison, in fact they shouldn’t even be in prison but there is a deliberate attempt to try to delegitimise certain individuals,” she said.

With student leaders facing legal woes and seeking new tactics, questions about the future of the academic year remain.

In early October, Wits called off its general assembly, ostensibly because students wanted a national shutdown of universities until government committed to providing free education. This call for a shutdown – which could jeapordise incoming and graduating students, as well as foreign students and those on bursaries – has been one of the loudest demands of the movement at Wits, and the students have faced severe criticism over it. But Kalla denied that the protesters had any intention of ending the academic year.

“We certainly don’t want the academic programme to come to a halt, that has never been a threat that has come from our side,â€ she said.

â€œWe want a response from government around our demand and a commitment that needs to be made because we can’t continue to protest fees each year. There needs to be an end in sight, there needs to be a longer term strategy, especially for education which affects every single thing in this country.â€

Kalla said the “peaceful meeting they would have liked to have at Solomon Mahlangu House” had been dispersed violently by the university. But now that the university is targeting residents and imposing curfews they will push forward in a different way.

Student leaders, she said, are planning a national Fees Must Fall day.

“What has made it difficult to redirect attention to government is that our universities across the country is fighting against us and we have spent more time fighting them [management] than we should to move forward together,” she said.

Student protesters have been intimidated and are scared, she said, but theyâ€™re determined to continue fighting. The word on everyoneâ€™s lips is â€œdefianceâ€.

Do not mourn mobilize. They won’t finish us all. #FreeOurcadres pic.twitter.com/X3obLhiIx0

The studentsâ€™ defiance of the Wits curfew this week, was just one instance of this, she said, and there is more to come.