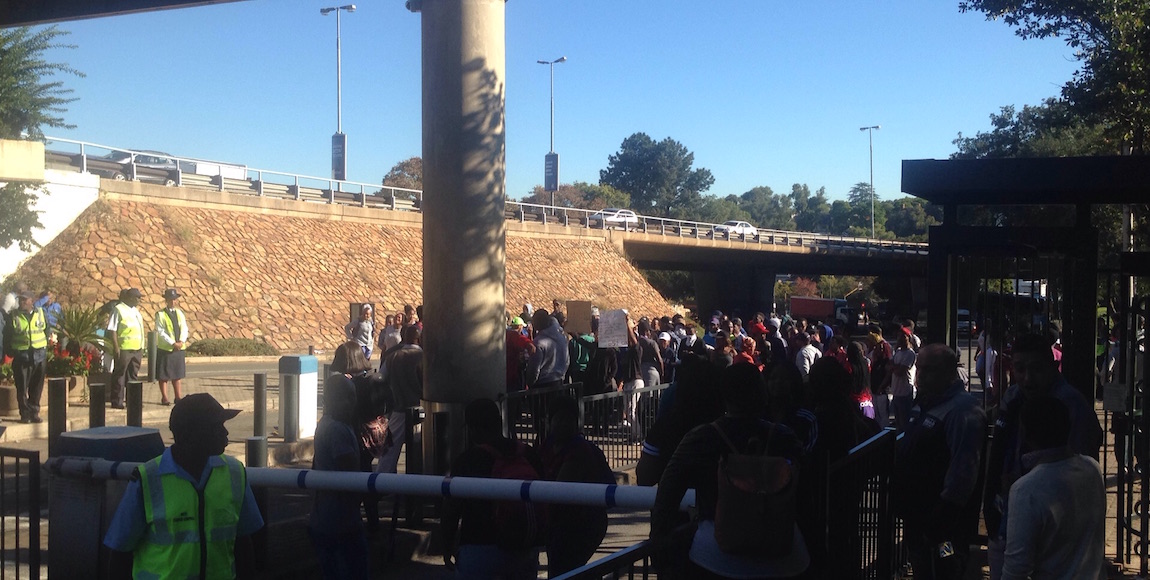 Early on Thursday morning, students from the University of Witwatersrand Yale Village residence barricaded the Empire Road Entrance to the main campus. Students burned tyres in front of the gates and barricaded the pedestrian entrance with a stop sign.

Students say they are protesting the lack of cleaning services and WiFi at the residence, and the lack transport services to campus. Their demands include uncapped WiFi, an increase in security at the residence and a convenient bus schedule. Theyâ€™ve also asked to be reimbursed for services, such as cleaning, which they paid for as part of their residence fees but which they say have not been rendered. According to Wits Vuvuzela, fees at Yale Village range from R39 468 to R52 026.

Addressing students on Thursday, Sabelo Ngubeni, a member of Yale Village House Committee, said that students have been getting sick and needed to be taken to hospital as a result of the lack of cleaning services.

A member of the house committee at Yale Village residence, who asked to remain anynymous, said the issue started last year when the Parktown and Esselen residences were closed down and the students living there were moved to Yale Village. He said students were promised the same services as they had been getting before, which are promised to all students living in residence. However, the student says that Wits University and Res Publica, the company that owns that residence have a disagreement and students are not getting most of the services that they paid for. The student says they have been engaging with Wits and that the university has been playing the blame game. The student says they occupied the fees office at the end of February and, because nothing happened from that action, they resorted to protesting today.

#WitsProtest – Students say they have a number of demands which management is not attending to @KayaNews pic.twitter.com/9qWm3umptf

@thedailyvox 1. Fees are not the only problem today. We have no services at the new Wits res. It’s been 4 months with no cleaning services

@thedailyvox 2. We have no WiFi, cleaning services,transport to campus at night. We pay so much but nothing to show for it. Health issues

Students did not allow pedestrians or any vehicles, including Wits buses, to enter or leave the university. Vehicles within the university were diverted by police onto Yale Road towards to the Jorissen Street exit. Private security, police and Campus Protection Services were monitoring the situation.

Students handed over the memorandum of demands to Chief Operating Officer, Fani Sibanyoni and said the university had until the end of the day to respond to their demands.

The dean of students, Dr Puleng LenkaBula was on hand to receive a memorandum of demands from the students. However students refused to be addressed by her and requested that Vice-Chancellor Adam Habib should come down and address them. They eventually handed over their memorandum to Wits’s chief operating officer, Fani Sibanyoni. Students gave the university until the end of the day to respond to their demands.

[UPDATE]: Student protest on accommodation issues. Issues are being addressed by the Dean of Students, and other senior managers at Wits. pic.twitter.com/KBHeT6V8uP

*Editors’ note: This story has been updated with comment from students and the university.