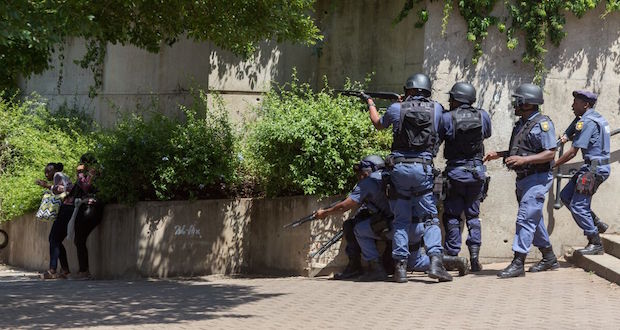 A protest on Wits Universityâ€™s on Thursday turned violent after students marched to the Wits Science Stadium on West Campus. The Wits SRC claims student leader Shaeera Kalla was shot in the back with rubber bullets numerous times, while running from police.

Student leader Shaeera shot 9 times on the back of her body by cops.Her hands were up saying we are peaceful don’t shoot #HabibsApartheid

We have found 1 more. 10 rubber bullet wounds at close range. While her hands were up saying we are peaceful https://t.co/WRF6NnSpG8

Wits SRC secretary general Fasiha Hassan said students were unarmed and marching peacefully on West Campus when police opened fire with rubber bullets and teargas. Hassan claims Kalla was shot several times in the back while running away from police.

Incoming Wits SRC deputy secretary general Kaamil Alli said Kalla had been pleading with police not to fire and to allow the students to return to the Great Hall piazza when police threw stun grenades.

â€œShaeera [Kalla] got a bit shocked. Her and Catherine [Seabe] turned around to move back to the crowd and they just opened fire. Apparently, they were only like three metres away from her when they shot her. There were other students that were injured as well, there was a student that dislocated her knee,â€ he said.

Student leader Catherine, getting oxygen after cops tear gassed them while they were peacefully marching. pic.twitter.com/MMEYxvA8X4

Yamkela Gola, a student who was present during the confrontation, said police told protesters that they were not allowed to march to the Science Stadium as it was not a designated protest area. â€œOur plan of march was to meet by the Great Hall and then weâ€™d discuss a way forward â€¦ There was no confrontation with the cops whatsoever. Then never told us not to go to West Campus, there was no warning that they would shoot, nothing,â€ he said.

Asked to comment on the destruction of the test papers, Alli said he did not know whether it was related in any way to the protest that police had dispersed and in which Kalla, Seabe and others had been injured.

“I am unaware of that incident, but to my knowledge there wasnâ€™t a reason why the police could have dispersed us. Our protest was very peaceful, we have our hands up and all of that. This is the first time Iâ€™m hearing about the test papers and papers … if there were any students who joined us it was because they did so willingly. We didnâ€™t force anyone out of class or anything like that,” he said.

Wits University spokesperson Shirona Patel told The Daily Vox the university has yet to receive confirmation of the shooting incident.

â€œWe still have to get confirmation. Security say there were no rubber bullets fired but now someone else is saying it was policeâ€, said Patel.

Patel said management was aware that Kalla had been treated at campus health for unspecified injuries.

ProtestersÂ then congregated outside the Great Hall, and are movingÂ towards Braamfontein. *This is a developing story and will be updated.