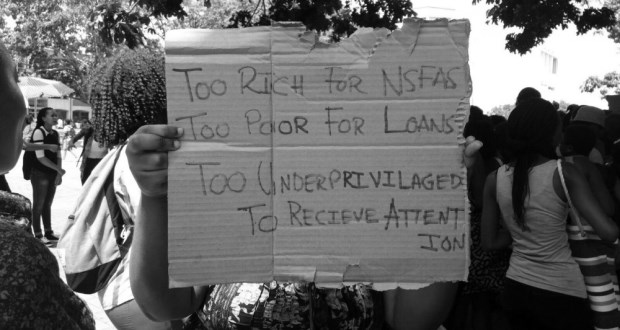 One of the biggest issues to come out of last yearâ€™s #FeesMustFall protests is how many university students are excluded from studying because they are considered too rich for NSFAS and too poor to pay for their tuition on their own. So Student Representative Councils (SRCs) at a few campuses have stepped in to raise funds for this â€œmissing middleâ€.

1.Wits University
In January this year the Wits SRCÂ launched the #Access campaign. Fasiha Hassan, the secretary general of the SRC said that the campaign has encountered a lot of difficulty since it has been launched. â€œWe have had difficulty in getting funds from many corporates that we approached, but we have raised approximately R4 million thus far.â€ The fund is predominantly for students who are academically deserving and those who haveÂ outstanding fees. The fund also focuses on students who did not receive Nsfas funding but cannot afford university fees.

However, only about 10% of the Wits student population are NSFAS beneficiaries #Access

Academic,financial,accommodation, food security and more because as we know being intelligent isnâ€™t good enough if you are poor #Access (11)

2. University of the Western Cape (UWC)
The UWC Ikamva Lethu (Our future) campaign was launched by the universityâ€™s SRC in February this year. Unathi Sigodi, the secretary general of the SRC, said, â€œThe fund was launched to assist poor students who are struggling to get money to register or to continue with their studies.â€ Sigodi said the fund has collected an estimated R4,5 million now, and aims to collect R15 million by August.The SRC has a set of specific criteria that they use to decide which students qualify for funding, but would not disclose these to The Daily Vox.

3.University of the Free State (UFS)
Last year, the SRC launched the â€œRight to Learnâ€ fundraising campaign, aimed to assist students who cannot pay their tuition fees. Lindokuhle Ntuli, president of the SRC, said,â€œThe fund has managed to assist many students to register in January this year we raised over R1,2 million.â€ Ntuli said the campaign is still running and hoping to assist many students. They fund also raised R10, 000 for students who cannot afford textbooks. He said, â€œno student has been financially excluded this year because of the campaignâ€. He could not confirm the amount of money that has been raised by the campaign to date, but their goal was to raise R5 million by April this year.

SMS “UFS” to 40010 to be part of the change – every SMS costs R20 which will go to the Right to Learn campaign. #NoDeregistration2016 âœŠ

4. University of Kwazulu Natal (UKZN)
The â€œI Care UKZNâ€ campaign was launched Â in JanuaryÂ by students, for students under the leadership of the UKZN SRC. Senzo Ngidii, the central SRC president, said, â€œThe aim was to get funding to assist students who were not funded by National Student Financial Aid Scheme but are doing well in their academics.â€ The campaign was launched in January this year and Ngidi said it has not been a success as planned, as the funds received have not been enough. They will be starting the campaign again in the second semester.

5. Nelson Mandela Metropolitan University (NMMU)
The SRC at NMMU launched the #enablingDREAMS funding campaign in January. Nicholas Nyati, president of the SRC said that the campaign was launched specifically for students who are registered with a down payment exemption. â€œDown payment exemption is free registration but most of these students are rejected by National Student Financial Aid Scheme and they do not have money for food and textbooks.â€ The campaign has raised R180, 000 from ordinary citizens and students. Nyati said the campaign will have a second phase in the second semester, where they will reach out to business and host events to raise the necessary funds.