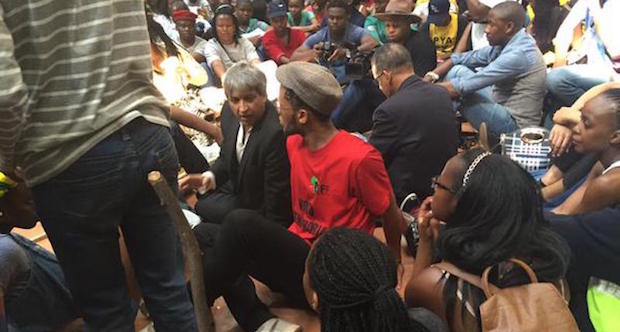 An extraordinary council meeting is deadlocked as the university council requires the attendance of two more members to reachÂ quorum.Â The situation atÂ Wits University has however grown tense, after external security guardsÂ fired pepper sprayÂ into the Senate House Concourse, an enclosed plaza adjoining the university’s administrative centre, where students had gathered to protest around vice-chancellor Adam Habib.

“We can’t continue like this,” Wits SRC president Shaeera Kalla told The Daily Vox. “We need to make a decision. If they don’t give [the decision not to raise the fees] to us we need to occupy the Senate House concourse.”

Habib hasÂ been sitting with the students on the floor of the concourse since just after midday. Social media reports suggested he was being “held hostage” but protestors said he had come willingly, was being treated well and had agreed to remain with them. As preparations were made for an extraordinary council meeting,Â protesters were hosed with pepper pray.

The Daily Vox reporter Pontsho Pilane was in the concourse whenÂ incident occurred.Â Students at first believed the substance fired at the crowd to have been teargas.

I’ve just been told it’s pepper spray not tear gas. Apparently tear gas stings in eyes as well. No sting in my eyes.

Panicked students fled the concourse, and some retaliated by throwing water bottles and brandishing sticks and chairs.

After it became clear that the danger had passed, the students headed back into the concourse, singing Senzeni Na.

Wits University spokesperson Shirona Patel later The Daily Vox that the pepper spray had been fired by an external security guard who had “felt threatened” while escorting council members from their cars to the concourse, where they were to meet with students.

“He did not act on instruction from management,” Patel said, and had “been asked to leave the building”. Pam Dube, the dean of students, was among those who were pepper sprayed.

Students and the SRC are set to observe a meeting of the university council, headed by chairperson Randall Carolissen.

The SRC had called for the meeting after Habib told them that heÂ did not have the authority to annul the fee increase and that this was something only the university council could do.

Asked to clarify the students’ demands of council, incoming SRC president Nompendulo Mkatshwa told The Daily Vox: “The agenda of this march is that we don’t want fee increases.”

It’s unclear how, or when, the standoff will end.