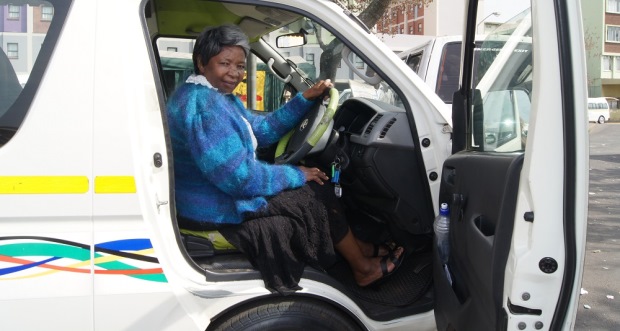 DORIS GUMEDE from Inanda, Durban, has been a taxi driver for over 30 years and has now decided to retire. She told the Daily Vox what itâ€™s like to be a female driver and taxi owner in this male-dominated industry.

I started off with driving metered taxis back in the early 80s where I was working for Morris Deluxe taxis. I decided to go to the taxi industry because I had not completed high school and did not see myself working as a domestic worker for the rest of my life. I also had a family that was counting on me; I couldnâ€™t go back to school but had to find a job.

Working as a meter taxi driver was great but there was too much discrimination during that time. At some point I decided to leave metered taxis because I was now married and had children. Being a meter taxi driver required flexibility and by that time it was no longer easy as I had to juggle between family and work. I then decided to go into the public taxi industry and learned nobody treats you like a queen in this industry.

Working with men is not easy. They are very difficult, especially when it comes to their female counterparts. Although taxi drivers constantly tried to cooperate with me as their fellow driver, now that I am a taxi owner, I encounter many challenges. Other taxi owners still have a mentality that a woman cannot be part of this industry because of its nature and they normally look down upon female drivers. Since I started driving public taxis from different routes, I have never had a fellow female driver but I would normally see them from other areas.

Being in a taxi industry is challenging when you are a woman because people have different perceptions ofÂ the kind of a job that can only be done by a man – being a taxi driver is one of those. The other problem that is prevalent is the issue of jealousy among taxi owners when it comes to routes, and thatâ€™s why sometimes we find that there is taxi violence. Being a female taxi owner is worse because whenever there is going to be taxi violence, I just have to stay at home with my family – unless there is a strike, I march along with the other owners and drivers.

I have worked in the meter taxi industry for years and I have never encountered any other issues except discrimination. I was good at my job and finding employment was not that hard for me. When I left for the public taxis, I have had to work with different people and have received a fair share of criticism. At times I would have to go to the rank and guard the place so that taxi drivers from other areas would not use our route. Occasionally, I would be late and they would make me pay a certain amount as a reprimand for being late for work.

Being a family woman and a taxi driver was not easy as I would have to start off my day by taking my kids to school before I go to work, but it was manageable and my husband understood. I am ageing and have decided to retire. My children have grown and are no longer fond of the idea that their mother is a taxi driver.

Since I am now a taxi owner, I would love to have female drivers because there arenâ€™t many of them, but I would require strong women who are stern and bold like me. I have had to deal with different attitudes and had to learn to change tyres on my own because I am a woman who thinks she can do a manâ€™s job. Some of my male counterparts would stand and watch me changing my own tyre and say â€œChange it Doris, you are a tough woman right?â€ Being in a taxi industry has taught me to toughen up and not let anyone walk all over my head; it is the only way of survival in this kind of business.