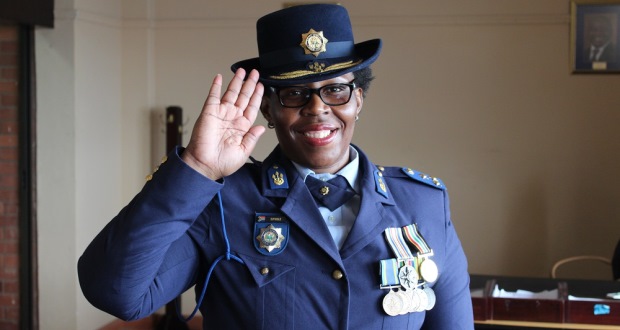 SAPS brigadier BONGI SITHOLE (49) has been in the police force longer than the average Daily Vox reader has been alive. She spoke to Qiniso Mbili about her 30 years in the force and manoeuvring her way through the system as the mother of two adults who want her to resign.

It was in 1986 when I saw two policewomen fully dressed in their uniform. It suited them so well but I did not know what job they did so I went on to ask. I found out they were police and I told them I wanted to dress like that one day. A few days later, I was recruited.

I was recruited during the last few years of apartheid. Although not much happened at the junior positions, one could see there was favouritism enjoyed by our white counterparts. Some nights we would be given instructions to patrol all night long while they sat in the office. Also, there was less room and possibility for black police officers to move up the ranks. A whole lot of things changed for the better after the transition to democracy.

I believe that for one to become a police officer they have to have a calling. This can be a very hard job if you do not have the calling. I love my job and it comes naturally to me. The only challenge I have is continuing to work against the will of my two children. They tell me how uncomfortable they are almost every time I go to work, thinking I might not come back. Over the years, they have learnt to trust me and worry less when I tell them that I will be back in one piece. As much as my job is made of dangers, I always do my best to make sure I go back to my children at the end of the day. My most memorable experience in the force is when I was a detective a few years ago. We were on a mission to arrest an Umlazi drug dealer who we had heard would be receiving a huge amount of drugs at his home. We also received information that this guy was looking for a maid, so this is when I had to jump in as I was the only woman in the investigating team. I acted as an interested candidate for the maid job, I got the job and went undercover. For weeks, I was pretending to be a maid while collecting intel from his operations.

It was a very challenging thing to do and required a whole lot from me. Weeks and weeks passed; every morning I would wake up and go risk my life. I would clean his house, wash his clothes and iron for him. He would usually scold me for messing things up, I was not good at all at being a maid. When he paid me, I would submit the wages as part of the investigation. After weeks of laundry, cooking, cleaning and life-threatening risks, we were able to apprehend and arrest the suspect.

Last year â€“ which saw a spike in police killings – was one of the scariest years of my policing career, but as a member of the police force I had to understand it was a work hazard and I knew I had to treat all these incidents separately.

Over the years, I have learned that policing can be very fulfilling. The bigger the risk one might take, the more fulfillment one stands to enjoy. This is an unpredictable job. One has to be ready to serve the community in more than one way, from having a grown man cry to you about his domestic problems to delivering a baby at the police station.

Some people still think this is a manâ€™s job. However that is not true, women are just as capable.

It is a huge responsibility as one carries peopleâ€™s hope, one is a high symbol of security. If I had to choose a job all over again, I would choose the same job. I see it as a prestigious opportunity and it can be highly rewarding.

Brigadier Bongi Sithole was awarded for her service to the SAPS at a medal parade hosted by the Provincial Commissioner, lieutenant general Mmamonnye Ngobeni at the Chatsworth Training Academy last week.