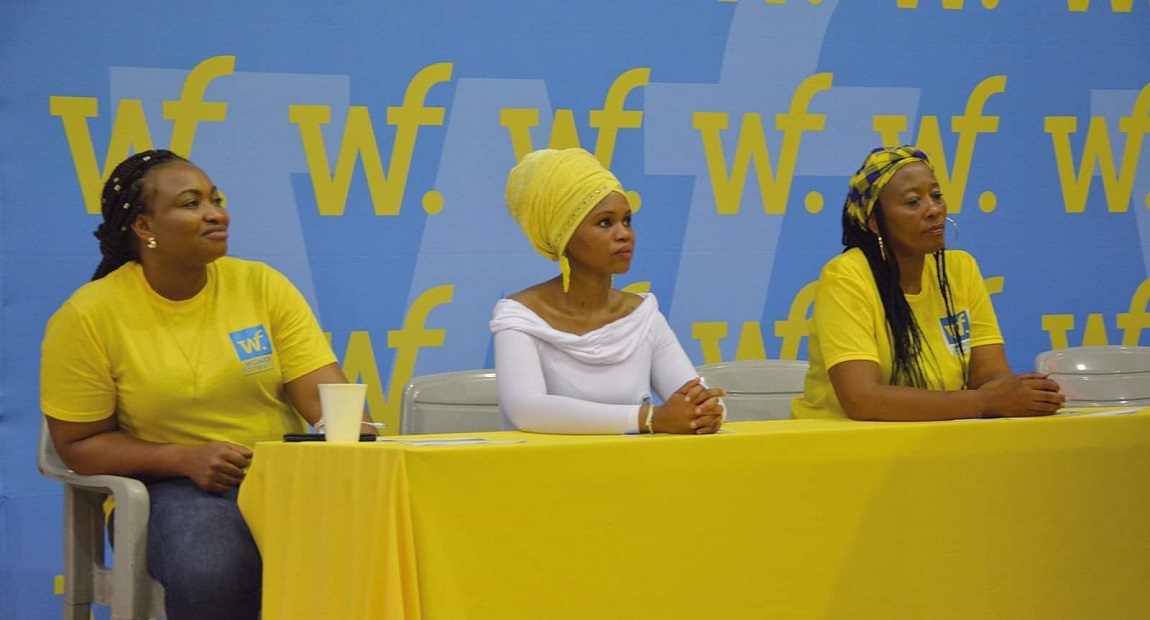 Women Forward (WF) began as a grassroots movement on farmland, planted among women who were marginalised. Domestic workers, farm workers and women from rural backgrounds grew the constituency. Now the party has expanded to represent different kinds of women, and the whole spectrum of marginalised groups. These include children, refugees, pensioners, people living with disabilities, and LGBTQIA+ individuals. The party is also entirely women-led.

Established in 2008 by the president and co-founder is Nana Ngobese-Nxumalo, WF contested the 2009 elections. The party garnered just over 5000 votes but since WF did not contest in 2014 there’s been a gap since inception. This is according to WF Gauteng Provincial Chair Thando Gumede, who joined WF in 2018, in an interview with The Daily Vox.

Patriarchy is pervasive in every aspect of South African society

WF believes patriarchy is the core issue that has disrupted equality, social cohesion, and general growth and prosperity. However, WF is not a single-issue party, Gumede explained.

“It makes people think our agenda is to put women in power when our agenda is to break down a system of oppression that has brought the country to its knees,” she said. “We are interested in patriarchy. But we represent a vast majority of the country and patriarchy spills into almost every facet of life. It is responsible for the violence, inequality, slowing of the economy, and poor land redistribution,” Gumede said.

WF is an organisation representing those that are sidelined by patriarchy, Gumede said. “Patriarchy is a very intersectional concept,” Gumede explained. The system seeks to benefit mature, white, cisgendered, heterosexual, able-bodied men. That’s: ageism, sexism, classism because of the historical socio-economic impact of apartheid, transphobia, homophobia, and ableism. “If you are a human being that has any of these elements attached to you then you should be touched about the state of the nation,” Gumede said. Patriarchy even extend to the land question.

The more relevant question: Who is going to get the land?

“There is no land question, there’s a land statement,” Gumede said, “the land is ours and we’re taking the land.” But the more relevant issue for WF is: Who is going to own the land and what is the relevant mechanics of redistribution of that land? “The redistribution must have the face of women because they are in the majority,” she said.

The Economic Freedom Fighters (EFF) ushered the land discussion to parliament. However, Gumede is not convinced that the EFF has the best land policy. “In relation to jobs and land the EFF has not been explicit in who is going to get those things,” she said. Vuyani Pambo, EFF member and student activist, told Gumede the party will give 50% of the land to men and 50% to women and children. “Now how can it be that young people and women constitute 50% of the population?” Gumede asked.

WF proposes gender mainstreaming in land distribution in South Africa using policies, monitoring and evaluation. This will ensure women get access to land and that distribution represents the demographics of the country.

“We don’t want a system of oppression handed from one group of individuals to another. With that I mean from white hands to black hands, so land going from white men to black men,” Gumede said.

What about jobs? Equal pay for equal work

“The discussion around jobs is useless if you don’t speak about unequal payment between races and sexes,” Gumede said. There must be equal pay and employment, Gumede added. “We want an equal pay act to ensure all people in specific sectors will be paid in accordance regardless of race, sex, gender, background,” she said. This should extend toward women in sport. The law must be instituted alongside an equal pay commission to discuss currently discriminated against people who are not earning equal pay, and to propose new models.

WF recognises that gender-based violence (GBV) is a national crisis. GBV is not just “a war between men and women”, but affects gender nonconforming people and boys as well, Gumede said. The party has a prevention and response strategy against GBV.

The first port of call for WF’s prevention response is an education. Gumede said the party wants to institute a mandatory course from school until undergraduate phase in university to unlearn patriarchy. Here, young people will unlearn gender norms, toxic masculinity and femininity; and talk about law, criminality, human rights, the constitution, and our responsibilities as human beings towards each other. “The social fabric in our country has been broken,” Gumede said. By changing the education in our society, WF hopes this will have a ripple effect into the community to repair that social fabric.

WF also wants to criminalise hate speech including all racist, misogynist, homophobic and transphobic slurs that are discriminatory and incite violence. “If we allow people to think this way and say these things then we create an environment that is enabling for violence,” Gumede said. “We need to make it absolutely reprehensible for someone to speak like that,” she added. Like the Germans made it absolutely reprehensible for people to think in an anti-semitic, racist way, South Africa has the capacity to echo that.

For response, WF is advocating for increased policing units in schools, universities, and in communities. Police need to be accessible, adequately trained, and sensitised to gender issues, Gumede said. Government must also dedicate more funding towards mobile policing with rape kits as well as Thuthuzela Care Centres. The WF is also proposing an audit of community-based organisations (CBOs) eating money from the state purse. The state must centralise and mainstream less impactful CBOs , she said.

The justice system, Gumede said, should be well-resourced with staff, technology and research materials.

As a last resort for repeated perpetrators of sexual violence, WF proposes castration. “Castration is not only for punishment but it’s also to help the person themselves and the society at large. It reduces sex drive. Castration detaches [men] from what they had used to identify themselves with as a human being. Manhood shouldn’t depend on the testicles and penis to exist,” Gumede said. On the subject of gender, WF wants equitable access to healthcare in relation to the LGBTQI community.

Healthcare for the LGBTQI community

Access to sexual healthcare products must extend to the youth, Gumede said.

An equitable future for the youth

Unequal access to sanitary pads, for example, is a barrier for the youth population who menstruate. “The word equal is not good enough, we want equity,” Gumede said. “Equity means removing all of the obstacles that take you from point A to point B,” she added. For the youth, the WF does not believe it’s good enough to create equal opportunity. “If there’s a rock in front of you, we want to make sure you can bust through the rock and make it to the other side,” she said.

This means better training for teachers, especially for schools that receive less funding from government. “For quality education, teachers need to be well-equipped,” Gumede said. She added that government must spend more money on training teachers. The state must also provide sanitary pads, panties and adequate sanitation infrastructure in schools for schoolchildren who menstruate. Applying gender mainstreaming in schools will ensure that schools become spaces for all children to use.

To fund free and quality higher education, the WF is proposing a taxation scheme targeted at the rich. “There are people who can afford to access higher education so we want to tax those people,” Gumede said. This money can help subsidise other students’ accommodation, food, books, and tuition.

To first time voters, Gumede said: “Here’s an organisation that’s going against the system of oppression, that sees you and wants to be your voice of representation in the political space.”