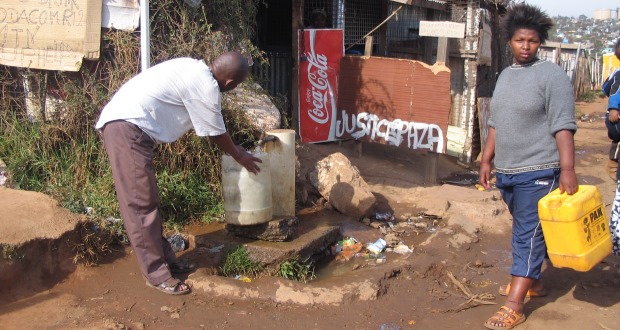 South Africa’s miraculous peaceful transition from apartheid to democracy saw the enacting of one of the most progressive constitutions in the world which guarantees the right to water and sanitation. Yet, as we commemorate 60 years since the 1956 Women’s March, we find that women still bear the brunt of poverty and inequality; their lives are marked with a day-to-day lived experience of chronic marginalisation. This is particularly evident in the indignities suffered due to government system failures concerning water and sanitation.

In terms of water, significant strides have been made as South Africa met its Millennium Development Goals target to halve the proportion of people without sustainable access to safe drinking water and sanitation by 2015. However, other indicators show that more still needs to be done.

StatsSA reports that 13.9% of South African households access water through communal taps, while a further 2.7% rely on neighbour’s taps as their water source. What this translates to in reality is that women and girls are tasked with the arduous daily responsibility of collecting water for the household as they find themselves at the bottom of the pyramid of patriarchal power relations.

It is in these nuanced realities that women are prohibited from having their rights realised as constitutionally obligated. Access to improved sanitation for households in the country stands at 79.9% (2015 figures). What this figure does not show is how many have their access limited due to sharing sanitation facilities, lack of maintenance of sanitation infrastructure by government and whether or not the distance and proximity limit people’s access or not.

For women, these details are a matter of exposure to gendered violence amongst other issues of safety and security.

Hygiene considerations, such as taps placed separately from communal toilets, giving rise to unwashed hands, and the lack of provision for female hygiene product disposal are critical yet overlooked factors that speak to the protection of human dignity. Non-ventilated pit latrines, chemical toilets and communal flush toilets which are scarcely maintained and not nearly adequate to provide full access to everyone are the norm if you find yourself living in the rural areas or an informal settlement. Even worse, some women opt to use open fields rather than risk physical safety to relieve themselves or a bucket with only a curtain separating her from her child in their tiny shack.

In our legislative framework’s definition of sanitation, unrestricted access to feminine hygiene products has been overlooked. Falling through the cracks yet again, the South African woman, already financially burdened, has to not only buy these products but also pay tax on them.

The cost of sanitary pads should be a public health emergency

The multiplier effects on this seemingly minor omission are astounding; girls who cannot afford to purchase feminine hygiene products miss an inordinate amount of school leading to poorer grades, resulting in increased dropout rates and long-term impairment to any chance of upward economic mobility, leading to the deepening of the poverty cycle.

The lack of gender-sensitive sanitation rights highlights a culture that leaves the girl child behind, a culture that fails to grasps the immense implications the empowerment of women has on the growth of any nation.

As we commemorate the bravery of the 1956 women who challenged the evil of apartheid, let us take a moment to truly reflect on the conditions of women living in abject poverty in informal settlements.

Let us challenge our laws and constitution to apply meaningfully to all who live in South Africa, a woman living with a disability in an informal settlement must have her dignity protected by the Constitution as an able-bodied woman living in formal housing.

This Women’s Month, we must ask if women’s rights to dignity have been upheld through the services they receive from government. Are women dignified when they resort to using newspapers, and other unhygienic materials, because they cannot afford sanitary towels? Is there dignity when a daily act of nature comes with frustration, fear and humiliation?

Can we call ourselves an equal society, or a society thriving towards equality, when the implementations of our laws, the enactment of our rights, make us feel invisible?

Matshidiso Motsoeneng is a researcher at Studies in Poverty and Inequality Institute (SPII) who is currently working a report tracking the progressive realisation of the right to water and sanitation in South Africa. SPII is a South Africa think-tank specialising in research and analysis of poverty in sub-Saharan Africa. For access to SPII reports and publications, visit www.spii.org.za, and for more information about our Decent Standard of Living work, email advocacy@spii.org.za.