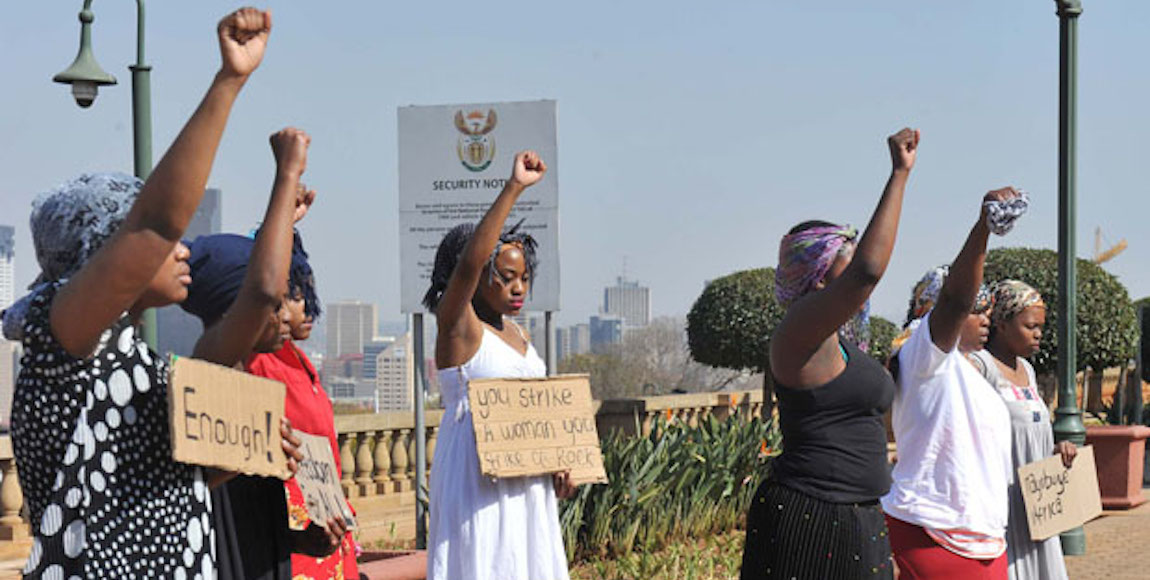 In South Africa, August is dedicated to the thousands of women who marched to the Union Buildings on August 9 1956 for political freedoms. It is also a tribute to the pioneers of women’s movements in this country. During this month, we’re supposed to show appreciation for women, recognise their achievements and acknowledge that they are equal to men in status, intellect, capability and worth. Instead, each year Women’s Month simply highlights how little South African institutions prioritise women and their rights.

Take the Grace Mugabe scandal for example. Earlier this month, Zimbabwe’s first lady allegedly assaulted a South African model with an extension cord after she found the young woman in her sons’ Sandton hotel room. Instead of being held to account for the assault, Mugabe got diplomatic immunity. There was no consideration for the young woman’s trauma, let alone her basic rights as a South African citizen. Suddenly, we had diplomatic amnesia about the notion that we are all equal before the law.

But you don’t have to be the first lady of a foreign country to get away with violence against women in South Africa.

Former Kaizer Chiefs footballer Marks Maponyane was found guilty of assaulting his ex-wife Sylvia throughout their marriage. She said that after their 39-year union, their children were still not aware of the details of her ongoing abuse.

The price of decades of trauma and grief for a South African woman? R3 000 or six months in prison.

This is NONSENSE, given an option of paying a fine of just a mere R3000 or 6 months what what… just because he is #MarksMaponyane RUBBUSH! pic.twitter.com/gHi9B2O1xO

Kwaito artist Arthur Mafokate also allegedly assaulted his then-girlfriend songstress Busisiwe Twala aka Cici in June. Mafokate allegedly dragged Cici through the street as she hung from his car to the point where she had to have a pelvic replacement operation. Cici posted a graphic picture of her injury on Instagram captioned: “pelvic replacement op. #Breakthesilence”.

She took the matter to court and Mafokate’s legal team proposed a motion to mediate with him, while he continues to insist that he’s not an abuser. Naturally Cici refused. The case has been postponed to September 20. Women’s month or not, men remain trash.

Even those who are expected to lead us are not exempt from showing contempt towards women.

Former deputy Minister of Higher Education Mduduzi Manana assaulted not one but two women in a Fourways nightclub. Manana claimed to have been “extremely provoked” – in an audio recording after the assault, Manana says he slapped a woman because she called him gay.

Mananaâ€™s trash behaviour is homophobia and patriarchy made manifest

Two weeks after he confessed, Manana resigned as deputy minister but was retained as an MP.

The biggest WTF moment of the whole debacle was that no one from the ANC publicly condemned Manana’s transgressions in the two weeks before he caved to public pressure and resigned. He even had the support of the ANC Women’s League (ANCWL). Its president Bathabile Dlamini wouldn’t call for Manana’s removal. She said she refused to join the “attack” on Manana, adding that the assault was being used as “a political tool”. Dlamini said we shouldn’t “start with him” because “there are those that are actually worse than him.”

This is a whole leader of a Women’s League. But she isn’t the only one to say questionable things about gender-based violence this August. Touted ANC presidential candidate, Nkosazana Dlamini-Zuma said women need to take action and leave men who assault them. Because it’s really that simple. These are women who we are supposed to be looking to for leadership and inspiration. Instead, all we get is internalised patriarchy.

Women’s Month rolls around like clockwork every year but we’re no closer to justice for women. Our leaders say they want to empower women, yet they offer only tepid condemnation of gender-based violence. The month is nothing more than a failed attempt to cover up the daily atrocities that women face in our country. Basically, it’s window dressing.