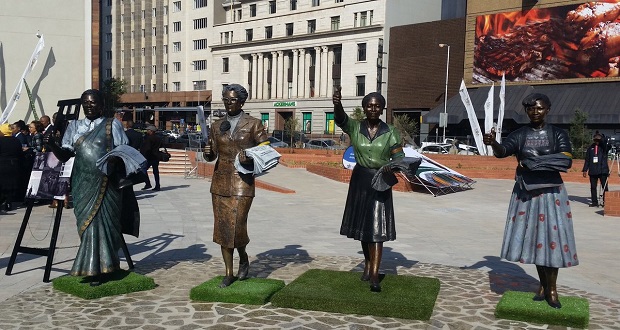 So South Africa has all these laws and regulations that are meant to further women’sÂ rights and protect them, right? Well, what happens in theory doesn’t always translate to the ideal situation in practice. DANA DA SILVA and NYIKO SHIKWAMBANE evaluate the real status of women in South Africa.

1. Equality, freedom and all that jazz

The Bill of Rights, which is a cornerstone of democracy in South Africa, assures the rights of everyone to human dignity, equality and freedom.

According to the Constitutional Court, â€œIt was not until the introduction of the Bill of Rights that all women in this country received formal recognition as equal citizens. South African women – under the social and even legal control of their fathers or husbands – were second-class citizens for many years.â€

And of course, as the Court points out, â€œblack women were obviously doubly disadvantaged as a result of their race and their gender.â€

The Bill of Rights is supposed to change that.

The dignity and bodily integrity of women are constantly undermined by violence, prejudice and persecution.

According to APCOF (African Policing Civilian Oversight Forum), our country has one of the highest rates of gender based violence, that have been reported to the police, in the world. Between 2007 to 2013 there were 1, 016 588 contact crimes, where the person knows the perpetrator, against women. However, this is only a fraction of the total number of cases that are reported, because letâ€™s be honest – reporting sexual violence isnâ€™t easy in this country.

According to a study conducted by Gender Links,Â 77 % of women experienced violence in Limpopo, 51% in Gauteng, 45% in the Western Cape and 36% in KwaZulu-Natal. This took the form of emotional, economic, sexual or physical violence and was experienced by women at least once in their lives outside of and inside their intimate relationships.

Gender based violence is very real in South Africa. It cannot solely be narrowed down to statistics. The story must be told. #OneDayLeader4

2. Justice for survivors of sexual violence

The Sexual Offences and Related Matters Act was amended in 2007 to broaden the scope of the definition of rape.Â Rape CrisisÂ reported that the amendments gave recommendations on how sexual offence cases should be managed at police stations, by forensic practitioners as well as the in the courts.

A 2013 study by the Womenâ€™s Legal Centre and Rape Crisis highlighted five key problems in the criminal justice system that hinder a victimâ€™s ability to seek justice:

a. Many victims donâ€™t have access to information, from the time they report a sexual offence to when it gets to court;

b.Victims do not have access to case-specific information, such as whether it is being it is being investigated or not;

c. The lack of psychosocial support can make the process overwhelming and make victims more inclined to drop charges;

d. There is also a lack of coordination between different state departments such as the SAPS, Department of Health and the justice department. This leads to ineffective service delivery and the frustrates the victim further; and

e. There is no real complaint mechanism for when things go wrong while reporting a sexual offence. When they receive poor or inadequate assistance from the police, many victims donâ€™t know where to seek recourse, and their trauma can be exacerbated.

When (if) the matter finally makes it to court, the standard of proof required is guilt beyond a reasonable doubt.

â€œAlthough there are important reasons for this burden of proof. We need to explore what kind of evidence is efficient to create a doubt.The criminal justice system is infused with the same sexism that permeates our society. We need to amend our laws of evidence which include psycho-social expertise on what happens to victims of rape and trauma,â€ said Bonita Meyersfeld, Director at the Centre for Applied Legal Studies.

According to research conducted by Africa Check, as few as one in 13 rape cases are reported to the police station. The working culture at police stations remains hostile to female victims, which discourages them from reporting rape cases.

The Domestic Violence ActÂ 116 of 1998 was created to protect survivors of domestic violence. The act recognises that abuse takes different forms such as sexual abuse, domestic abuse, economic abuse and psychological and emotional abuse.

â€œThereâ€™s a huge disjuncture between the law and what happens in practice,â€ says Koketso Moeti, founder of Amandla.mobi. This is particularly the case where, according to the act, police are supposed to find out if there is a gun in the house and if there is one, they have an obligation to remove it, which often doesnâ€™t happen.

Letâ€™s not forget the fact that, back in 2015, a whole department of women trolled the very same women itâ€™s meant to protect by suggesting that something should be â€œdoneâ€ with women who file domestic abuse charges and then later withdraw them, for whatever reason.

Moeti also said that there are issues with the space when you go to report these incidents to the police. â€œItâ€™s hardly any safe space, you walk in, you report, there are other people there, thereâ€™s issues around, you donâ€™t want the community knowing your affairs.â€

4. Equity in the workplace

The Employment Equity Act, No. 55 of 1998 also protectsÂ women in the workplace from discrimination.

The Commission of Gender Equality was also set up to advance gender equity in all spheres of society. Some of their tasks include investigating complaints on any gender related issue and investigating inequality.

While South Africa has received international recognition for its efforts to to close the gender gap, and has been ranked 16th in the world by the Global Gender Gap Index, it still has a long way to go.

There still exists a gap between men and women in terms of remuneration, advancement and participation. According to the the University of Johannesburgâ€™s Women in the Workplace research, it is estimated that women get paid 15% less than their male counterparts in South Africa. This means that a woman would need to work two months more than their male colleague if they want to get the same salary.

Even our national heroines are not exempt from the wage gap. As Fatima Moosa wrote back in July, we need to talk about how badly SAâ€™s sportswomen are paid. There are no South African laws that require women to change their surname upon marriage. Section 26 of the Births and Registration Amendment Act of 1992 states the women are free to use any name they so wish.

However, most South African women traditionally adopt their husband’s surname.

The Department of Home Affairs has been automatically changing womenâ€™s surnames when their marriage is registered. The Deputy Minister of Home Affairsâ€™ Vusi Mkhize says the department cannot cope with all the records. He says the attempt to reverse the action will be a challenging task.

AÂ  campaign to take this matter to the Equality Court has launched by science journalist Sarah Wild and the Legal Resources Centre.

Whew. We have 170 women affected by #MarriedNames. This is a Thing. The @LRC_SouthAfrica is open to helping us with it.